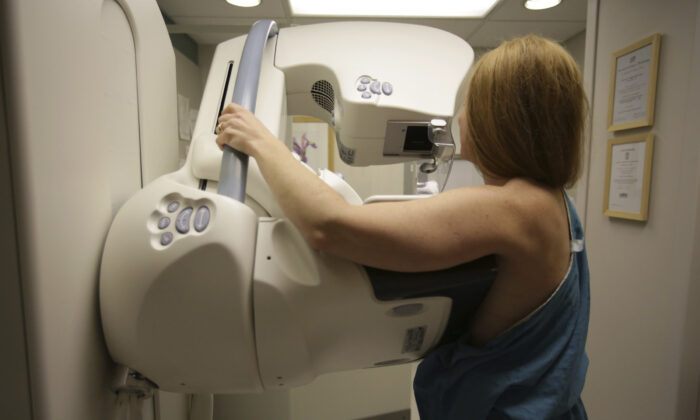 A woman gets a mammogram at the University of Michigan Cancer Center in Ann Arbor, Michigan, on May 22, 2015. (Kimberly P. Mitchell/Detroit Free Press via AP, File)
Health & Safety

Breast cancer is becoming the commonest cancer affecting females in the world. It accounted for 12.5 percent of cancers diagnosed in 2020 according to World Cancer Research Fund International. Knowing about breast masses and their treatment can be part of prevention before a mass becomes cancerous, doctors suggest.

An “Overview of Cancers in Hong Kong” report from the Hong Kong Hospital Authority (pdf) shows that breast cancer accounts for 27.4 percent of all diagnosed cancers in females. There were 4,761 cases in 2019, which is quadruple the 1,152 diagnosed in 1993.

The global survival rate of breast cancer patients, five or more years after diagnosis, varies from 44 to 90 percent, with the higher rates found in developed countries, according to the WHO.

Cancer experts suggest that mammography (MMG) screening, an X-ray technique, is effective for detecting asymptomatic and early-stage tumors, such as calcified spots, lumps, and abnormalities in the deeper part of the breast tissue, especially for women aged 44–69 years. The WHO recommends women aged 50–69 should have an MMG screening every two years.

In general, physicians recommend that women seek medical advice as soon as they find a breast mass or lump.

But there are still some misconceptions about breast cancer that need to be clarified, said Dr. Angela Wai Chung, a surgeon in Mong Kok, Hong Kong. She said that many women may think that a painful lump in the breast is a malignant tumor, while breast lump pains are probably incited by hormones or caffeine. The majority of malignant tumors do not produce pain.

In an interview with The Epoch Times, Dr. Chung said that a breast lump could be one of the benign tumor types that won’t become malignant. Young women, in particular, need to know that around 70 percent of breast tumors in women aged 20 to 50 are benign,

However, women above 50 have a higher risk of developing breast cancer.

According to Hong Kong’s Centre for Health Protection, risk factors for female breast cancer include never having had a child or never breastfeeding, family history of breast cancer, early menarche or late menopause, lengthy use of oral contraceptives, and obesity after menopause.

In addition, women should watch out for breast health if they fall into a dietary habit of high calories, high fat, and sugar consumption.

Non-proliferative lesions are commonly seen as breast cysts that are fluid-filled sacs or as a breast abscess. Normally, breast cysts are formed from breast fluid secretion. But if solid tissue is found inside, it is necessary to resort to syringe extraction checks. Breast abscess tends to occur during breastfeeding. It won’t increase the risk of cancer and regular follow-up checks are good practise.

Breast fibroadenoma, one of the most common proliferative benign tumors with a smooth appearance, is frequently found in females aged 20 to 35. If the lump’s diameter is larger than 2 centimeter (just under one inch), it is recommended that it be removed. If it is an intraductal papilloma (a benign tumor in a breast milk duct), with any nipple discharge other than milk, it should be removed as soon as possible because it may morph into cancer.

Another benign breast mass is proliferative lesions with atypia (cells that look and grow faster than normal). It may be a precursor to carcinoma in situ and should be removed even though it is painlessness, Dr. Chung said.

Although a benign tumor may not necessarily grow into a malignant tumor, Dr. Chung stressed that for prevention, “it must be monitored regularly by palpation and MMG screening [to see] how fast it grows, whether the edges are clear, and whether there is vascular growth.”

Using the concept of vacuum aspiration, a tumor smaller than 3 centimeters (slightly more than one inch) can be completely removed through a 0.3 centimeter incision under local anesthesia, and the wound is almost invisible after the surgery.

This procedure is currently only available for benign breast tumors and is not suitable for tumors larger than 5 centimeters (2 inches), Dr. Chung said.

Not exclusive to females, breast cancers, although rare, can occur in males even though they do not have breasts as they do have a small amount of breast tissue.

However, men have less fatty tissue in their breasts, and cancer cells are more likely to migrate to lymph nodes.

Dr. Shen said that if men feel an irregular lump near the nipple or in the underarm, or a lump that is growing larger, they should seek medical care for ultrasound examination, biopsy, and further evaluation as soon as possible.

If early breast cancer symptoms are neglected, the golden time for treatment will be missed, which will make follow-up treatment more difficult, Dr. Shen warned.