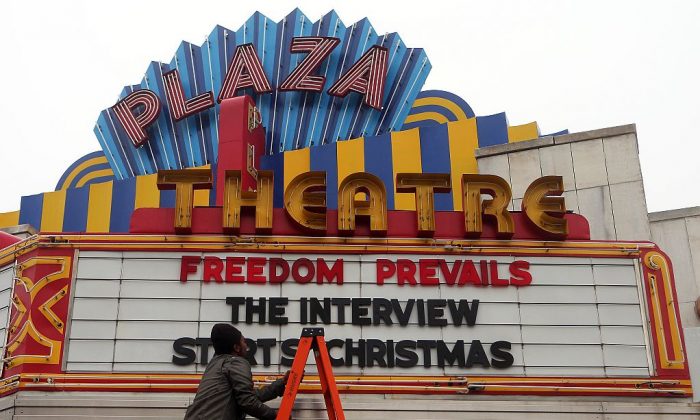 A man finishes hanging the marquis for “The Interview," at the Plaza Theatre in Atlanta, on Tuesday in which the theater will show on Christmas day. (AP Photo/Atlanta Journal-Constitution, Ben Gray)
US

Braving Threats, ‘The Interview’ to Show on Christmas Day in Some Theaters

Following Sony Pictures decision to ax “The Interview” after cybercriminals made threats against cinemas, the film will now be shown on Christmas Day at theaters that want to air it.

The two stars of the comedy, Seth Rogen and James Franco, confirmed Tuesday the decision to show the film.

“The people have spoken! Freedom has prevailed! Sony didn’t give up! The Interview will be shown at theaters willing to play it on Xmas day!” the two wrote on their respective Twitter accounts.

The Plaza Theatre in Atlanta was the first cinema that decided to become “one of the few theaters in the nation to open the film,” the company said on Facebook. It is a long-established art house.

Meanwhile, the Alamo Drafthouse cinema chain said it would start showing the movie on Thursday. The founder of the chain confirmed the decision on Thursday.

“Sony has authorized screenings of THE INTERVIEW on Christmas Day. We are making shows available within the hour,” tweeted Tim League, the founder.

Related Coverage
The Interview: The Most Successful Invisible Promo Campaign Ever

The move by Sony to shelve the comedy came after alleged North Korean hackers broke into the firm’s databases and started leaking confidential information about the movie’s plot as well as emails from executives. The satirical film’s plot is centered on assassinating the leader of North Korea, Kim Jong Un.

On Tuesday, when the news reached President Barack Obama, who criticized Sony last week, the White House praised Sony’s decision to release the film after all.

“The president applauds Sony’s decision to authorize screenings of the film. As the president made clear, we are a country that believes in free speech, and the right of artistic expression. The decision made by Sony and participating theaters allows people to make their own choices about the film, and we welcome that outcome,” said the White House in a statement.

A week ago, Obama described Sony’s decision to pull the movie as “a mistake.”

“We cannot have a society in which some dictator some place can start imposing censorship here in the United States,” he said, before adding: “I wish they had spoken to me first. I would have told them do not get into a pattern in which you’re intimidated by these kinds of criminal attacks.”

Some Republicans also wanted to see the film released in the United States, including Republican National Committee Chairman Reince Priebus.

He said in a statement, “Giving in to threats from the North Korean dictatorship is ceding our freedom to the whims of a totalitarian regime. We are setting a troubling example and a terrible precedent. Today, we’re talking about the movie industry. Tomorrow, we could be talking about energy, manufacturing, publishing, or even small businesses.”

Regal, AMC, Cinemark, Cineplex, and Carmike theaters, who between them operate tens of thousands of theaters across the United States, announced on Dec. 17 the decision to pull the movie.