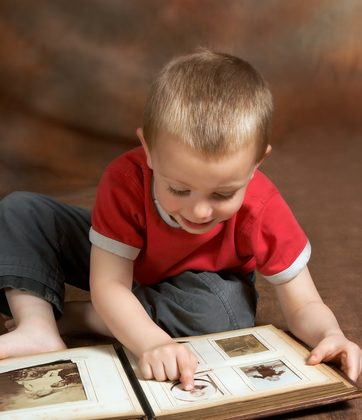 A file photo of a boy looking through an old photo album. A boy called Sam in case studies made some startling statements while looking through old family photos, cited as evidence along with numerous other cases of reincarnation. (Shutterstock*)
Beyond Science

A little boy referred to in case studies as “Sam,” showed convincing evidence that he is the reincarnation of his grandfather. Sam was 18 months old when his father was changing his diaper. Sam told his father, “When I was your age, I used to change your diaper.”

Dr. Jim B. Tucker at the Psychiatric Department of the University of Virginia explained Sam’s story in a video posted on the university website. Tucker has explored 2,500 cases of children remembering their past lives.

He explained that Sam made some startling statements while looking at an old photo album.

Sam was 4 years old when his grandmother died. His father brought an old photo album home from her house when he cleaned it out. To Sam’s parents’ knowledge, Sam had never seen a photo of his grandfather.

When they were looking through the album, Sam pointed to a photo of a car, and said “That’s my car.” It was his grandfather’s first car, one he’d been quite attached to.

Sam’s mother was skeptical—not predisposed to believe in reincarnation as a Baptist.

She corrected him and said, that’s your grandfather. “No, that’s me,” he replied.

Tucker said he looked at the photos and he would not have been able to tell which of the boys in the photo was the grandfather having seen other photos of the grandfather.

Testing it further, Sam’s mother asked if he remembered anything else from his past life. He said someone “turned my sister into a fish.”

The grandfather’s sister had been murdered and her corpse was dumped in a body of water. Sam’s father said the boy would not have heard this story.

Dr. Michael Shermer, publisher of Skeptic Magazine, asked in the video: “How do we know these things actually happened?”

He said Sam’s case and the thousands of similar cases are based on anecdotes told by the parents, and events can sometimes become distorted when told by an excited parent. Also, parents may influence the children in various ways.

Tucker took parental enthusiasm into account, however. He recorded the initial attitude of parents and found no correlation between that attitude and what the children reported.

Some children have given detailed reports of the locations they lived in previous lives. Visiting the sites, researchers have verified that people had recently died in the areas and that those people’s lives fit the descriptions given by the children.

RELATED: 10 Amazing Things Kids Have Said About Past Lives

*Image of boy looking through album via Shutterstock.