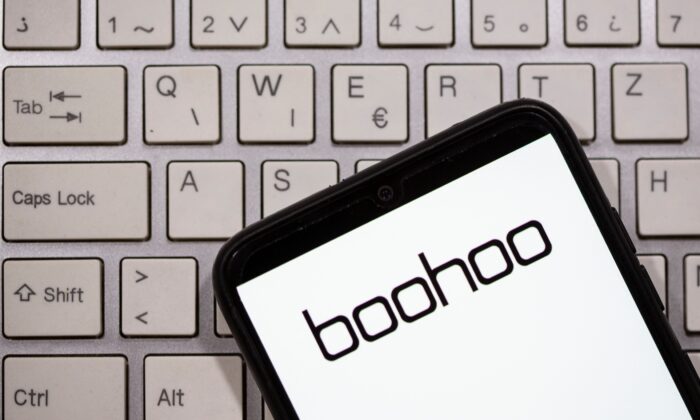 A smartphone with the Boohoo logo displayed is seen on a keyboard in this illustration taken on Sept. 30, 2020. (Dado Ruvic/Illustration/Reuters)
UK

LONDON—British online fashion retailer Boohoo warned on Thursday that full year profit margins will be lower than its previous guidance due to a rise in freight costs in its supply chain and higher wages for its distribution centre workers.

Shares in the group dropped 11 percent, extending year-on-year losses to 37 percent after it said full year 2021–22 adjusted Earnings Before Interest, Taxes, Depreciation, and Amortization (EBITDA) margins were now expected to be 9 percent to 9.5 percent, compared to 9.5 percent to 10 percent previously guided.

“Elevated short-term cost headwinds experienced in the first half are expected to continue in H2 alongside recent freight inflation in our supply chain and wage inflation within our distribution centres,” it said.

The group, which is seeking to improve its image after negative publicity over supply chain failings, also raised its guidance for full year capital expenditure to £275 million ($376.2 million) from up to £250 million ($342 million) previously.

It plans to open a new distribution centre in North America in 2023.

Boohoo made adjusted EBITDA of £85.1 million ($116.5 million) in the six months to Aug. 31, down 5 percent on the same period last year, reflecting £26 million ($35.6 million) of additional freight and logistics costs.

Boohoo said consumer demand had improved through both August and September.

Finance chief Neil Catto told Reuters the firm was in “fairly good shape” as regards seasonal workers for its distribution centres, though it still needed to recruit another 1,000 in Britain’s tight labour market.

“We’re attracting the staff with higher wages and potentially some bonuses,” he told Reuters.

He said Boohoo’s current season prices are “a few percent” higher year-on-year due to the elevated import costs.

On Wednesday Next warned labour shortages could impact Christmas deliveries.

In January, Boohoo purchased the Debenhams brand out of administration for £55 million ($75.3 million) and in February bought the Dorothy Perkins, Wallis, and Burton brands from the administrators of Arcadia for £25.2 million ($34.5 million).