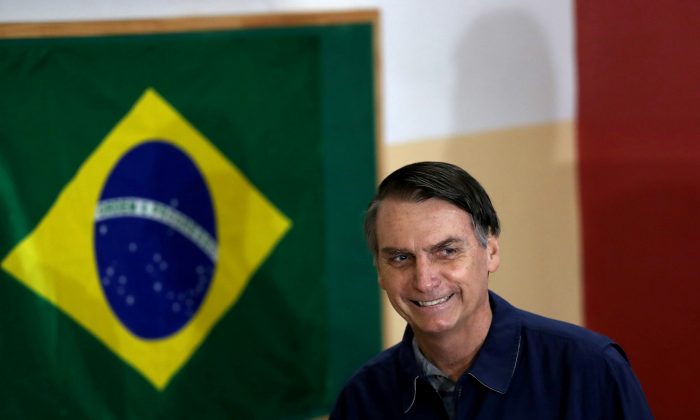 Bolsonaro’s Hardline Stance on China Has Beijing Nervous About Brazil

BRASILIA — The Chinese government is nervous about Brazil’s leading presidential candidate, Jair Bolsonaro, whose China-bashing threatens to chill a trading relationship that has benefited both countries.

Chinese diplomats based in Brasilia have met twice with top Bolsonaro advisors in recent weeks, according to participants in the meetings. Their aim is to highlight cooperation with Latin America’s largest country, whose grain and minerals have fueled China’s rise.

Bolsonaro has portrayed China, its largest trading partner, as a predator looking to dominate key sectors of its economy.

With its own economy slowing, China can’t afford to become embroiled in another costly trade war such as the one with the United States.

Two-way trade between China and Brazil totaled $75 billion last year, according to Brazilian government statistics. China has invested $124 billion in Brazil since 2003, mostly in the oil, mining and energy sectors, and is eager to bankroll railway, port, and other infrastructure projects to speed the transfer of Brazilian grain.

But the far-right Bolsonaro has criticized China repeatedly on the campaign trail, saying the Chinese shouldn’t be allowed to own Brazilian land or control key industries. Bolsonaro is expected to win a landslide victory in balloting on Oct. 28.

“The Chinese are not buying in Brazil. They are buying Brazil,” Bolsonaro has warned repeatedly.

Companies in the crosshairs include China Molybdenum Co., which bought a $1.7 billion niobium mine in 2016 that Bolsonaro says Brazil should develop itself. Niobium is used as an additive to steel to make it stronger and lighter. It is used in cars, buildings, jet engines, and a host of other applications. Brazil controls about 85 percent of the world’s supply and Bolsonaro wants his nation to reap the benefits.

Bolsonaro also is on record opposing a planned privatization of some assets of state-owned utility Centrais Eletricas Brasileiras SA (Eletrobras), because of concerns that Chinese buyers would win the bid.

Also, in July 2018, China’s state-owned National Petroleum Corp (CNPC) signed a letter of intent with Brazilian oil company Petrobras for the Comperj refinery project, an agreement that followed CNPC and Petrobras’ signing a contract in 2017 to co-develop Brazil’s offshore Marlim cluster, the biggest discovery of oil in the country.

Officials at China Molybdenum declined requests for comment. But six senior executives at Chinese companies operating in Brazil told Reuters they are watching Bolsonaro’s remarks with varying degrees of concern.

“He is on guard against China,” one Chinese infrastructure executive told Reuters.

Bolsonaro’s friendly leanings toward Taiwan are likewise vexing to Beijing, which considers Taiwan a renegade province. Bolsonaro in February became the first Brazilian presidential candidate to visit Taiwan since Brazil recognized Beijing as the sole Chinese government under the “One China” policy in the 1970s.

Bolsonaro’s combative stance is in stark contrast to the rest of Latin America, whose leaders have welcomed Chinese investment, loans, and commodities purchases without scrutiny.

Bolsonaro is content with China purchasing commodities. But the former Army captain is wary of the country’s recent shopping spree in Brazil’s energy and infrastructure sectors.

Brazil is now expected to put a number of government concessions and assets up for bid next year, including railways and state-held energy assets.

The outgoing administration of President Michel Temer has attempted to privatize state-controlled energy company Eletrobras, a move which requires congressional approval. Bolsonaro has said he is against selling Eletrobras generation assets because it would “leave Brazil in Chinese hands.”