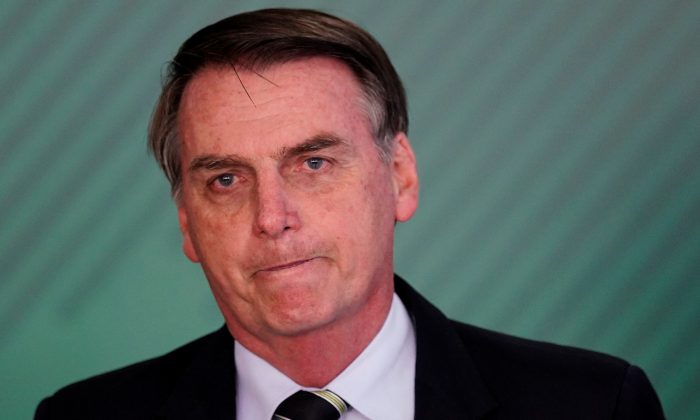 Brazil's President Jair Bolsonaro reacts during a signing ceremony of the decree which eases gun restrictions in Brazil, at the Planalto Palace in Brasilia, Brazil, Jan. 15, 2019. (Reuters/Ueslei Marcelino)
Americas

BRASILIA/RIO DE JANEIRO—Brazilian President Jair Bolsonaro signed a temporary decree on Jan. 15 making it easier for Brazilians to buy guns, delivering on a campaign promise to overturn strict regulations in a country suffering from a record wave of murders.

Bolsonaro won the presidency by running on a law-and-order platform, and often delighted supporters at campaign stops with his signature “guns up” hand gesture. His maverick presidential run energized a base of rural landowners, Christian conservatives, and free-market hawks who wanted a tougher response to years of rising violence and political graft.

The temporary decree, which will expire in 120 days unless ratified by Congress, is likely to thrill his supporters.

A former paratrooper who took office on Jan. 1, Bolsonaro eventually wants to overturn a 2003 law that effectively banned the civilian purchase of guns.

“To guarantee citizens their legitimate right to defense, I, as president, will use this weapon,” Bolsonaro said, holding up the pen he used to sign the decree.

Onyx Lorenzoni, Bolsonaro’s chief of staff, said the government is considering lowering taxes on guns and opening up Brazil’s small-arms market to foreign firms. The thornier question of granting more permits for citizens to carry guns outside their homes or personal businesses is also under study.

Shares of domestic gun maker Taurus Armas SA, which has a dominant share of the Brazilian market, dropped 16 percent in late trading on Jan. 15, as investors took profits. The stock has more than tripled in the last 12 months, as Bolsonaro promised to loosen gun controls.

However, Silva’s attempts to deepen gun control foundered in a 2005 referendum, when about 65 percent of Brazilians voted against a proposal to completely ban gun sales.

Bolsonaro’s executive order will remove the “discretionary” role that police have in approving civilians’ requests to buy guns. He has said decisions about who can carry weapons are subjective.

The measure will apply to people living in the countryside, those residing in urban areas where the homicide rate is above 10 deaths per 100,000 people, and to “collectors and hunters.”

Brazilians will be allowed to keep up to four guns in their homes or offices, though that number could rise on a case-by-case basis. Any home with a child or someone with certain mental illnesses must store the weapons in a safe.

Federal Police data shows that just over 646,000 legally-purchased arms are in circulation in Brazil. About half of those weapons are registered to private citizens. The rest are held by security personnel.

Accurate data on how many illegal firearms are in Brazil is hard to come by, but previous studies from the Justice Ministry suggest nearly 8 million guns are in the country illegally.

Lorenzoni said the decree restored the right of citizens to have a weapon for their legitimate defense.