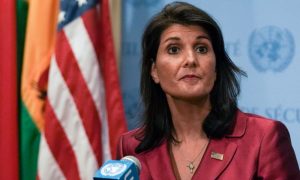 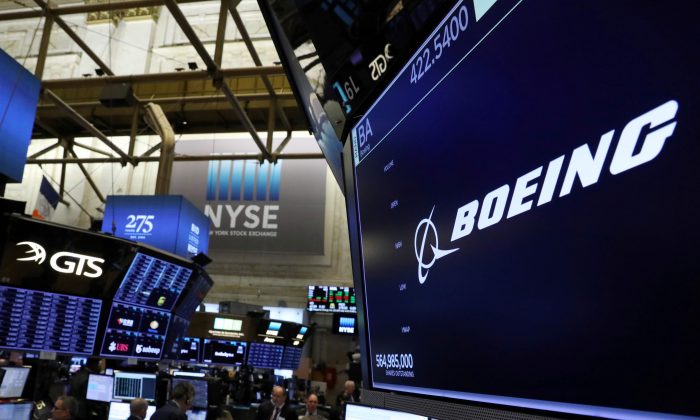 The company logo for Boeing is displayed on a screen on the floor of the New York Stock Exchange (NYSE) in New York City, on March 11, 2019. (Brendan McDermid/Reuters)
Investment

Boeing Shares Cheaper, but Are They a Buy?

NEW YORK—The fall in Boeing shares has made the stock’s valuation less expensive but that may not make it an obvious buy for investors.

The planemaker’s shares have fallen 11 percent this week after an Ethiopian Airlines crash on March 10 that killed 157 people prompted the grounding of Boeing’s global 737 MAX fleet. Boeing shares were down 0.5 percent $375.09 midday March 14.

The declines come after a run for Boeing shares that saw the price more than double over the past two years, making the company the largest U.S. industrial firm by market value.

This week’s slide means the stock as of March 13 was trading at about 18.2 times earnings estimates for the next 12 months, according to Refinitiv data. That valuation is in line with its average forward P/E ratio over the past five years and well below the 20.5 times the stock was trading at a week ago.

But whether that means the stock is actually cheap at these levels could depend on the extent of the financial fallout from the crash, which investors and analysts were still assessing.

For example, according to Refinitiv data, the consensus analyst estimate for Boeing’s earnings per share this year, which calls for 26 percent growth, has not changed this week amid the evolving fallout for the company.

Boeing 737 MAX 8 and 9 planes will remain grounded for “weeks” at a minimum until a software upgrade could be tested and installed in all of the planes, U.S. lawmakers said on March 14.

Nancy Tengler, chief investment strategist at Tengler Wealth Management in Phoenix, which bought shares more than three years ago and has since seen the stock climb, said she was neither selling nor buying the stock this week.

“It’s fully-valued, based on what we know,” Tengler said. “If people start yanking orders … then the valuation might be a little bit high.”

“This is going to be one of those restarts for the company,” she added.

Analysts were seeking to determine the bottom-line implications for Boeing, especially since this was the second such crash involving the planemaker’s flagship new model in six months.

The 737 MAX is Boeing’s largest contributor of product revenue and earnings before interest and taxes (EBIT), according to Goldman Sachs analyst Noah Poponak.

Poponak estimates the MAX jet will account for 45 percent of total Boeing EBIT over the next five years.

“We believe investors were pricing in very limited risk to the 737 ramp-up profile, which now has greater risk within the wide range of possible outcomes following these incidents,” Poponak said in a research note.

JP Morgan analyst Seth Seifman said the situation could hurt Boeing’s cash flow in three ways: compensation of airlines for grounded planes; delays of deliveries of the jet; and any modifications for the aircraft.

“The situation will hopefully move forward sooner rather than later, with a path back into service, though we do not know how long this will take,” Seifman said in a note.

Even with the latest uncertainty and declines, Boeing shares were up 16 percent in 2019 as of  March 14.

Through March 13, Boeing shares had contributed more to the 10.2-percent gain for the Dow Jones Industrial Average in 2019 than any of the other 30 components of the blue-chip index, according to Bespoke Investment Group.

“It seems like the worst is over for Boeing, and the fact that the U.S. fleet is grounded means they have time to come up with for a fix for this,” Ghriskey said.