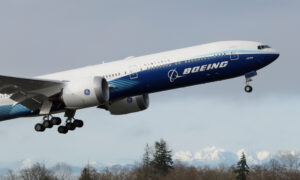 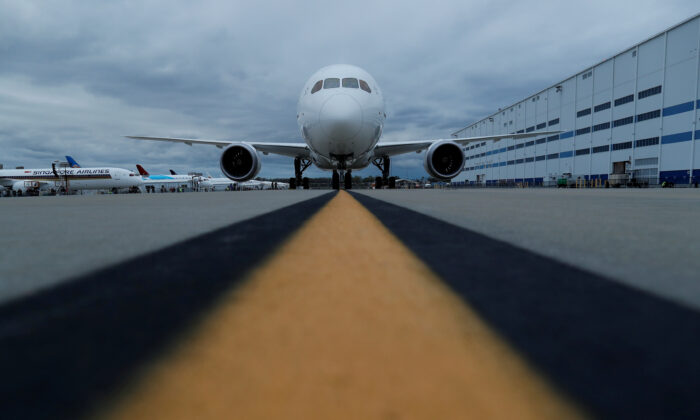 The Boeing 787-10 Dreamliner sits on the tarmac before a delivery ceremony to Singapore Airlines at the Boeing South Carolina Plant in North Charleston, S.C., on March 25, 2018. (Randall Hill/File Photo/Reuters)
Companies

SEATTLE—Boeing said on Tuesday it would cut its 787 production rate as it works through a new production-related structural defect in its troubled twin-aisle airliner program.

The company now forecasts delivering fewer than half of the lingering 100 or so 787s in its inventory this year—instead of the “vast majority” it had expected—as it continues forensic inspections and costly repairs to address quality flaws in the aircraft.

Boeing did not disclose a new production rate for the 787 program, but said it would shift temporarily below the current rate of five jets per month.

The latest new issue, first reported by Reuters on Monday, involved gaps where components are joined together in a forward pressure bulkhead, the U.S. Federal Aviation Administration said.

The FAA said late on Monday that Boeing, which spotted the problem, would fix it before the planes are delivered.

The U.S. planemaker’s 737 MAX and 787 have been afflicted by electrical defects and other issues since late last year, and it only resumed deliveries of the 787 in March after a five-month hiatus.

“We will continue to take the necessary time to ensure Boeing airplanes meet the highest quality prior to delivery,” Boeing said.

In June, Boeing booked 146 jet orders. That net figure takes into account instances in which the buyer converted an order to another model or canceled it entirely, including 71 737 MAX jets, the company said.

Boeing handed over 45 planes to customers in June, its highest monthly total since March 2019, when the second of two fatal 737 MAX crashes occurred.

Its June delivery tally includes 10 widebody aircraft, one of which was a 787-9 for Turkish Airlines, Boeing said.