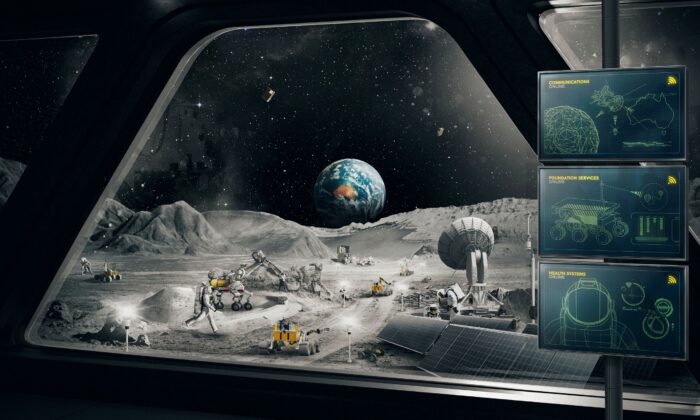 In this undated image, an imagined scene on the moon is depicted. (Australian Space Agency via AP)
Space

Blue Origin and Sierra Space have upped the space game with the announcement of a mixed-use business park, floating in low Earth orbit, slated to be launched sometime in the second half of this decade.

The 32,000-square-foot Orbital Reef space station is designed with multiple purposes, and will “provide anyone with the opportunity to establish their own address on orbit.” Flying over the planet in a “mid-inclination, 500-kilometer orbit,” the station offers space environment leases for “scientific research, exploration system development, invention and manufacture of new and unique products, media and advertising, or exotic hospitality.”

Boeing will be supplying the Starliner crew spacecraft and conducting maintenance operations on the space station. Redwire Space, based in Jacksonville, Florida, will be offering payload operation and support for micro-gravity research, among other expertise.

Genesis Engineering Solutions will provide individual spacecraft for external operations and tourist excursions, while Arizona University leads a global consortium of fourteen universities that will offer advisory services and outreach.

Orbital Reef is expected to take over from the International Space Station (ISS), sometime between 2028 and 2030. According to John Mulholland, Boeing VP and program manager for the ISS, the Orbital Reef goes one step ahead of ISS and can serve many different companies together with hosting non-specialist crews.

Mike Gold, Executive Vice President for Civil Space and External Affairs at Redwire, said that the micro-gravity environment on the space station enables entirely new scientific development leading to technologies that will improve life on Earth and provide a starting step for “humanity’s journey to the stars.”

Open to any country or individual, Blue Origin is attempting to offer end-to-end cost-effective services just like in a business park found on the surface of the planet.

Brent Sherwood, Senior Vice President of Advanced Development Programs for Blue Origin, said that while NASA provided the foundation, Orbital Reef will “expand access, lower the cost, and provide all the services and amenities needed to normalize space flight.”

“As a former NASA astronaut, I’ve been waiting for the moment where working and living in space is accessible to more people worldwide, and that moment has arrived,” said Dr. Janet Kavandi, Sierra Space president.

Blue Origin’s successful ventures include a suborbital tourist program that sends customers to the edge of space and back. The company has, till now, flown out eight people including its founder Jeff Bezos and actor William Shatner. The overall estimated cost for the outpost is somewhere near the $100 billion mark. Bezos has committed to spending $1 billion annually on the project.

Other space-faring nations are staking out their place in the frontier market as well. China, earlier this year, had launched the first module of its Tiangong space station. Tiangong can carry six astronauts and is scheduled to be completed in 2022.