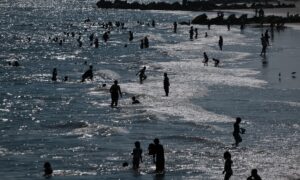 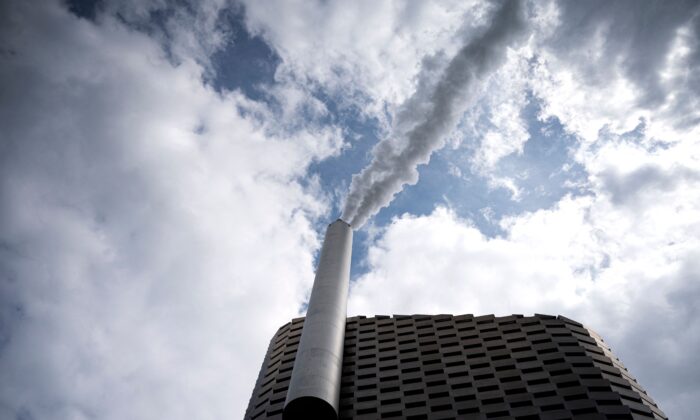 A detail of the pilot carbon dioxide capture plant is pictured at the Amager Bakke waste incinerator in Copenhagen, Denmark on June 24, 2021. (Ida Guldbaek Arentsen/Ritzau Scanpix/AFP via Getty Images)
Congress

If the driver of climate change is too much carbon dioxide, then one solution would be to remove that gas from the air. The $1.2 trillion bipartisan infrastructure bill passed by the Senate on Aug. 10 includes massive investments in direct air capture technologies to do just that.

These technologies have elicited interest from the private sector and other governments as well as continued skepticism from some quarters.

Alongside $2.5 billion to develop commercial carbon sequestration and transportation, as well as billions more in related spending, the bill allocates $3.5 billion from 2022 through 2026 to create four regional direct air capture hubs, which are intended to help curb greenhouse gases in the atmosphere by taking in air and removing carbon dioxide from it.

According to the bill, the hubs will be a network of air capture systems along with infrastructure for transporting and sequestering carbon dioxide, unspecified subsurface resources, and possible off-takers for carbon dioxide utilization.

Each network will be expected to capture and handle at least 1 million metric tons of atmospheric carbon dioxide per year. Additionally, the bill aims to locate at least two of the four regional direct air capture hubs in “economically distressed communities in the regions of the United States with high levels of coal, oil, or natural gas resources.”

In direct air capture systems, chemical solutions or solid fibers are used to capture carbon dioxide from the air. The captured carbon dioxide can then be stored deep underground or utilized in synthetic fuels and other products and processes.

Elon Musk, Bill Gates, BP, and Shell are among the individuals and companies to finance carbon capture, with Musk donating $100 million to fund his Carbon Removal XPRIZE.

Writing in June 2020, the International Energy Agency (IEA) claimed that the direct air capture of 10 million metric tons of carbon dioxide per year by 2030 is “within reach.” Reforestation, another carbon removal option highlighted by the IEA, may already be mitigating the impact of anthropogenic emissions, as the Earth has visibly “greened” over the past several decades.

The IEA’s report notes that direct air capture is still expensive and not yet demonstrated at a large scale. According to the agency, 15 existing air capture plants capture roughly 9,000 metric tons of carbon dioxide per year.

In 2018, a paper in the science journal Joule from the Canadian firm Carbon Capture outlined a design for a $1.1 billion cooling tower-based plant that they said could capture 1 million metric tons of carbon dioxide per year, at a cost of $94 to $232 per ton (they claimed capital costs for plants would decline to roughly $780 million from $1.1 billion over time).

They noted that “it is difficult to estimate the cost of a technology prior to its widespread deployment.”

In a June statement, Carbon Engineering and the British firm Storegga announced that they have started to engineer and design a plant to capture “between 500,000 and one million [metric tons] of carbon dioxide from the atmosphere annually,” which they claim could be operational by 2026.

Storegga CEO Nick Cooper stated that the project “follows our recent funding from the UK Government’s Department for Business, Energy and Industrial Strategy.”

Meanwhile, the Swiss firm Climeworks says that its new direct air capture and storage plant, Orca, will be launched on Sept. 8. The company claims the plant will capture 4,000 tons of carbon dioxide per year.

Direct air capture has met with some skepticism, in part because of the challenges involved in scaling it up. One study in Nature Communications estimated that direct air carbon capture and storage could cost up to 300 quintillion joules in energy input by 2100, equating to roughly a quarter of global energy at that point, according to their assumptions.

Researchers with the Center for Climate and Energy Solutions have also voiced concerns over the high costs of direct air capture, noting that “the high energy requirements for large-scale DAC facilities would also require an extraordinary increase in low-carbon energy capacity, beyond what will already be needed to decarbonize the energy system.”

Storrs Hall, an independent scientist and futurist, remains skeptical as well. In “Where Is My Flying Car? A Memoir of Future Past,” Hall speculates that advances in nanotechnology could vault humankind into a Second Atomic Age, in which pocket synthesizers, “the Second Atomic Age equivalent of the iPhone,” might actually deplete atmospheric carbon dioxide, potentially causing greater problems than too much atmospheric carbon dioxide.

Hall believes that several quintillion controllable nanoscale aerostats, equipped with mirrors and capable of orienting themselves in space, could be deployed to the stratosphere. By turning to either let sunlight through or send it back into space, they could function as what he calls a “programmable greenhouse gas,” overcoming concerns about man-made climate change.

“I would guess that ethanol mandates distort the larger economy in a way that a fairly self-contained [carbon dioxide] sequestration plant would not,” Hall added.