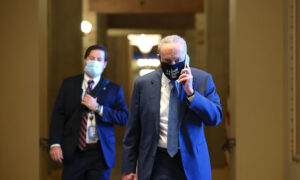 The dome of the U.S. Capitol is seen in Washington, on Aug. 8, 2021. (Mandel Ngan/AFP via Getty Images)
Congress

An Overview of the $1.2 Trillion Bipartisan Infrastructure Bill

The Senate passed the Infrastructure Investment and Jobs Act Tuesday morning after fierce debates over the bill in the House and Senate. The bill, at a $1.2 trillion price tag, is a far cry from the Democrats’ own $3.5 trillion plan. Still, some have criticized the bill for its content that goes beyond basic infrastructure improvement.

Some of the usual legislative items include around $250 billion allocated over 5 years for improvement of highways, plus an additional $3 billion toward the Tribal Transportation Program on Indian reservations. Another provision calls to invest around $30 billion into U.S. bridges, around $2.5 billion for metropolitan infrastructural improvement, the creation of safe routes to school for public school students, improving transportation access in rural areas, the development and renewal of recreational trails, and the improvement of evacuation routes in case of natural disasters or other emergencies.

Amtrak, the state-owned passenger train service, will receive $19.22 billion in grants for different rail lines across the country. An additional $1.32 billion was granted to the Federal Railroad Administration. Finally, the bill called for a $225 million investment into railroad research and development by the Federal Railroad Administration. The legislation also allocated $1.5 billion per year for five years, a total of $7.5 billion, toward the development of intercity railroads. In sum, the infrastructure bill allocates $28.05 billion over five years to railroad maintenance and development.

Under the idea that the internet is or should be a public utility, several sections of the bill focus on providing internet to poor and rural areas at huge expense. One of the largest allocations in the bill went toward this purpose, granting the FCC $14.2 billion toward the Affordable Connectivity Program, a program designed specifically to provide internet to U.S. students. On top of this, Congress set aside as much as $2 billion for Rural Utility Services like distance learning, telemedicine, and broadband internet. Even more was directed toward expanding internet access—as much as $42.5 billion dollars is to be directed toward the Broadband Equity, Access, and Deployment Program; along with an additional $2 billion specifically for the Broadband Connectivity Fund, and finally $2.8 billion for “Digital Equity.”

Several programs and allocations in the bill go toward efforts at combating climate change rather than specifically improving infrastructure. For example, it allots $50 million toward reducing truck emissions at port facilities. The bill also includes a $100 million grant toward reducing the surface temperature of inner-city streets, $13 billion toward improvement of air quality, investments in improving access to alternative fuels across the United States, and a carbon emissions reduction program.

Other provisions in the bill are less obviously related to infrastructure. For example, the bill calls for a “quantitative analysis of vulnerable road user fatalities and serious injuries” [which] “considers the demographics of the locations of fatalities and serious injuries, including race, ethnicity, age, income, and age.” The Denali Commision, a federal agency that focuses on the development of the state of Alaska, is granted $20 million per year for five years. The Central Utah Project, a water resource development program in Utah, receives $50 million toward the completion of the project. An additional $500 million is set to fund research and development of low- or zero-emission school buses.

Another $125 million will not go toward infrastructure at all, but will instead be directed over 5 years toward training and education.

The bill also creates new regulations for the automotive industry. One such provision calls for a mandate on auto manufacturers to include wildlife-collision prevention measures on all vehicles manufactured three years after the passage of the bill. It also requires that all vehicles manufactured after the same date be equipped with “advanced drunk and impaired driving prevention technology.” Whether this means that cars will have to come equipped with a breathalyzer or some other kind of technology is unclear. An especially odd section of the bill calls for federal research to be conducted on limousines.

One part of the bill calls for a “per-mile user fee”—a federal tax based on mileage driven by consumers. To collect this information, the bill calls for the use of third-party on-board diagnostic devices, smartphone apps, telemetric data collected by vehicle manufacturers, and data obtained by car insurance companies, among several other tools.

Another section focused on “disadvantaged business enterprises,” saying that “discrimination and related barriers continue to pose significant obstacles for minority- and women-owned businesses seeking to do business in Federally assisted surface transportation markets across the US.” It went on to make the bold claim that “Race- and gender-neutral efforts alone are insufficient to address the problem.” Thus, the bill requires that at least 10 percent of the allocations for small businesses be granted on the basis of race or sex.

One provision of the bill targets the cryptocurrency market, a move that attracted bipartisan criticism in the House and spurred the introduction of an amendment to change the rule that was shot down Monday afternoon.

This final version of the bill, which has been in negotiation for months, left many in Congress unhappy as progressives have pushed for a larger bill and libertarian elements have pushed for a smaller one. It is unclear whether the bill will pass the House in this setting.