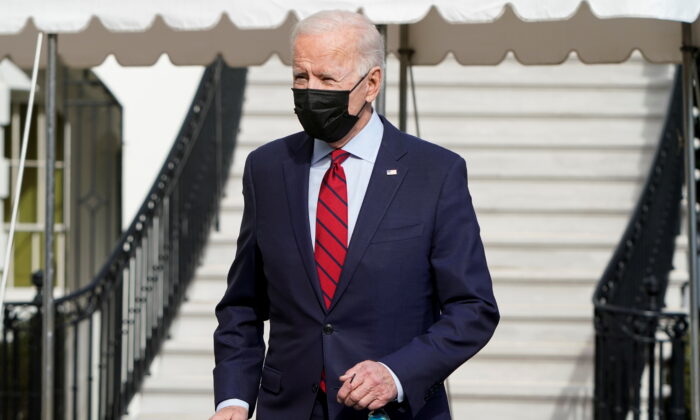 President Joe Biden speaks to the media as he departs for Wilmington, Delaware, from White House in Washington, on Feb. 27, 2021. (Joshua Roberts/Reuters)
Executive Branch

WASHINGTON—President Joe Biden defended workers’ rights to form unions and warned against intimidation of workers in a video posted on Twitter on Sunday night, as Amazon.com employees in Alabama vote on whether to unionize.

Biden didn’t mention Amazon, but specifically referenced “workers in Alabama” in the video and a tweet introducing it. He said every worker should have a free and fair choice to join a union, and no employer could take that away. “It’s your right … So make your voice heard,” he said.

“Unions lift up workers, both union and non-union, but especially black and brown workers,” Biden said in the video. “There should be no intimidation, no coercion, no threats, no anti-union propaganda. No supervisor should confront employees about their union preferences.”

Amazon, America’s second-biggest private employer, has no unionized labor in the United States, and workers at its fulfillment center in Bessemer, Alabama, would be the first if they vote in favor. Such a decision could encourage workers attempting to organize at other Amazon facilities.

A spokeswoman from the Retail, Wholesale & Department Store Union (RWDSU) said there had been many reports of various “various intimidation tactics used by Amazon on this campaign and during the voting period.”

Amazon, which has long avoided unionization, did not immediately respond to a request for comment.

The last attempt by Amazon workers to unionize was in 2014.

A top adviser to Biden and officials from the RWDSU discussed the union’s drive to organize Amazon workers at the Bessemer site after the inauguration, Reuters reported earlier this month.

On Sunday, RWDSU President Stuart Appelbaum welcomed what he called Biden’s “clear message of support” for the Amazon workers seeking to bring the first union to an Amazon warehouse.

“As President Biden points out, the best way for working people to protect themselves and their families is by organizing into unions. And that is why so many working women and men are fighting for a union at the Amazon facility in Bessemer, Alabama,” he said in a statement.

Richard Trumka, head of the AFL-CIO federation of unions, also hailed Biden’s tweet: “@POTUS is right: Every worker should have the free and fair choice to join a union.”

Biden has vowed to increase union membership in the United States after years of steady declines.

The Bureau of Labor Statistics reported the union membership rate in the private sector was around 6.2 percent in 2019, compared to around 20 percent in 1983.