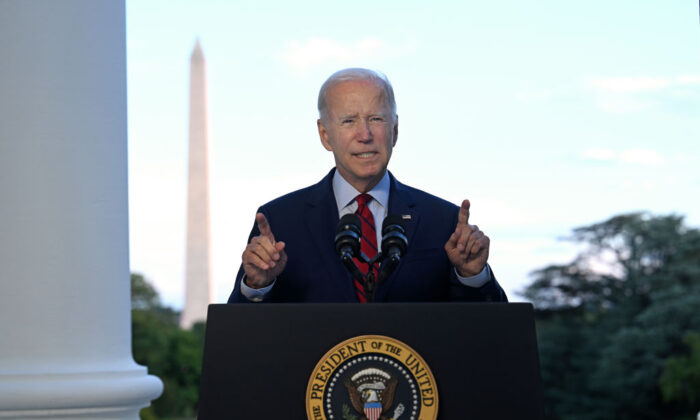 Biden Took Credit for the Strike on Al Qaeda, but Gets None

He leaves the bigger threats in Kabul, Islamabad, Moscow, and Beijing to wreak havoc

Zawahiri was a deputy to Osama Bin Laden and the most important planner of the 9/11 attacks. The drone found him on his balcony in Kabul, Afghanistan, which reflects badly on the Taliban’s promise not to provide safe haven to Al Qaeda.

In fact the Taliban knew about Zawahiri’s residence in Kabul, tried to cover it up after the strike by moving his family to another location, and then lambasted the United States for breaking international law.

Rather, the Taliban broke the law, by harboring one of the world’s most-wanted terrorists. The new Taliban is apparently the same as the old Taliban. Neither learned the lesson of September, 2001, that is, don’t support terrorism.

Given the thousands of American deaths that resulted from 9/11, including all those who died in Afghanistan, the Taliban is lucky that the United States sent a drone rather than the 101st Airborne to serve justice to Zawahiri.

The Taliban’s supreme leader, Mawlawi Haibatullah Akhundzada, may not be so lucky next time. He’s against America, and so, against freedom and democracy. He has proven his illiberality time and again, including through support for Haqqani and Al Qaeda terrorists, as well as his close relationship with the Chinese Communist Party (CCP). His leadership of the Taliban, the world’s most successful Islamic terrorist organization, is the ultimate proof.

The consequences for the Afghan people are horrific. Ninety-five percent are hungry. Some are selling their children and organs to survive.

This is not what America and allies, including from Muslim countries, wanted for Afghanistan. We worked hard, and our soldiers risked their lives, to bring democracy, human rights, development, and freedom to the country. The Taliban and their terrorist friends squelched the effort, including the bravery of Afghanistan’s best and brightest citizens. Full disclosure: the author worked for 1.5 years in Kabul as a U.S. Army civilian.

The U.S. concern with human rights was again evident in Monday’s strike in the Afghan capital. The planners were careful not to demolish Zawahiri’s house in the process of targeting him on the balcony, which saved his family from harm.

The Taliban, on the other hand, took many opportunities during the war to target their own Afghan civilians in schools and markets. They sought to strike fear into the population so that Afghans would reject the former, democratically-elected, government in Kabul.

While Biden does get credit for carrying forward the American tradition of minimizing deaths during conflict, he deserves little credit for the strike itself, which he reportedly put at risk through micro-management.

It took Biden almost a month to decide to order the strike, after plans for it were first presented to him on July 1. He only finally ordered it on July 25 when all his top advisors recommended going forward. That sounds like timidity.

We need someone in the White House who is more decisive when it comes to defeating America’s worst enemies.

Even if Biden did deserve credit, Zawahiri is not Osama bin-Laden, and the Al Qaeda of today is a shadow of its former self.

But the truth rarely matters to politicians. We can expect Biden to derive a wagon full of political hay from the recent strike on Zawahiri, not only for the 2024 elections, but in this year’s midterms. Voters, including Democrats in their next presidential primary choice, should look elsewhere.

Since the 1990s, Al Qaeda has pledged allegiance (bay’ah) to the Taliban. In turn, the Taliban are in debt to the Pakistani government for the latter’s years of support.

According to a 2001 Human Rights Watch report, “Pakistan is distinguished both by the sweep of its objectives and the scale of its efforts, which include soliciting funding for the Taliban, bankrolling Taliban operations, providing diplomatic support as the Taliban’s virtual emissaries abroad, arranging training for Taliban fighters, recruiting skilled and unskilled manpower to serve in Taliban armies, planning and directing offensives, providing and facilitating shipments of ammunition and fuel, and on several occasions apparently directly providing combat support.”

In turn, Pakistan is in debt to China for about $25 billion in Belt and Road funding. If Beijing’s operations elsewhere are any indication, hundreds of millions of dollars of that could have been paid in bribes to the country’s leadership.

So, if the CCP wanted Pakistan to cut its support to the Taliban during the war, all Beijing had to do was snap its fingers. Instead, it was one of its leading diplomatic supporters, and still is.

Zawahiri on his death was just a pawn compared to the bigger global threats in Beijing, Islamabad, and Moscow. Biden has little to crow over, given that at most he swatted a single terrorist on the rump of a dragon. There will be more terrorist leaders. Whack-a-mole is not a strategy, but a way to exhaust one’s own power while trying to look heroic.

In a fit of ineffectuality and weakness that extends back decades and across political parties, the United States and allies are leaving the more dangerous and powerful chain of command, through the Taliban, Islamabad, and Beijing regimes, untouched. As with Moscow, we have kicked these cans down the road, and as with Moscow, they will eventually come back to bite us in a far more costly way than had we defeated them in their infancies.