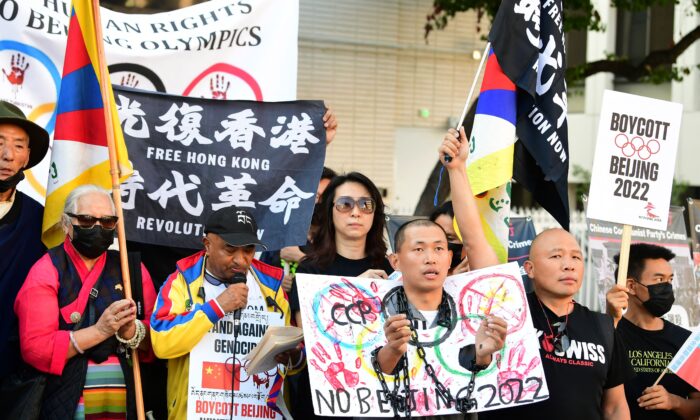 Activists rally in front of the Chinese Consulate, calling for a boycott of the 2022 Beijing Winter Olympics due to concerns over China's human rights record, in Los Angeles, Calif., on Nov. 3, 2021. (Frederic J. Brown/Getty Images)
Thinking About China

Beijing’s Religious Persecution Intensified Ahead of the Winter Olympics

Over the past year, leading up to the Winter Olympics, the Chinese regime has been intensifying its campaign against religion, particularly Islam, Tibetan Buddhism, Christianity, and Falun Gong.

“Don’t sportswash genocide,” read the signs held by Olympic protesters in London, who were enraged that the International Olympic Committee (IOC) had granted hosting rights to china, despite genocide being committed against Uyghur Muslims.

On Feb. 3, the day before the opening ceremony of the Games, Tibetans led a protest outside of the IOC headquarters in Switzerland.

In China, arrests of Falun Gong adherents increased ahead of the Olympics, especially in the three sites where the Games were held—Beijing, Yanqing (a rural district in Beijing), and Zhangjiakou in Hebei Province, according to Minghui.org, a U.S.-based website that tracks the persecution.

In its 2021 report on religious freedom in China, the U.S. Commission on International Religious Freedom (USCIRF) recommended that Washington “redesignate China as a country of particular concern … for engaging in systematic, ongoing, and egregious violations of religious freedom.”

Repression of religion has increased under Chinese leader Xi Jinping. Authorities in Qinghai Province announced on Jan. 20 that online Tibetan religious social media groups will be banned, starting on March 1.

The Chinese Communist Party (CCP) is promoting a new textbook, titled “The Principles of Scientific Atheism,” to be used by universities and Party members. The book contains the Party’s Religious Theory and Religious Policy, professing “the non-existence of God” and “the harmful effect of religion.”

The CCP, which maintains a belief of state atheism, requires its members to give up their religion. Wang Zuoan, director of the State Administration for Religious Affairs (SARA) wrote in a CCP Central Committee journal that Party cadres must be “unyielding Marxist atheists.”

Article 36 of China’s Constitution specifies that citizens have religious freedom. However, that freedom only extends to so-called “normal religious activities,” which limits participation to those religious organizations recognized by the CCP.

The Chinese Catholic Patriotic Association (CPA) is not allowed to recognize the Pope, and the bishops are appointed by the CCP. Some foreign observers estimate that there could be as many as 100 million Christians in China, with around 44 million worshiping in the state churches and about 56 million worshiping in underground churches. The underground Catholic churches tend to recognize the Pope.

The members and leaders of these underground churches are always in danger of being discovered and being jailed. Some have been charged with “illegal religious activities” or “disrupting social stability,” as well as charged under article 300 of the criminal code, which forbids using heretical organizations to “undermine the implementation of the law.”

For years, China has been carrying out a program of the sinicization of religion, infusing the religious liturgy with Communist Party slogans and images. Wang Zuoan, director of SARA, advised Party members to “guide religious groups and individuals with socialist core values and excellent traditional Chinese culture.”

Beijing also said that religious organizations must “spread the principles and policies” of the CCP. Consequently, both the Bible and the Quran are being rewritten.

As part of its attempts to control Tibetan Buddhism in 2007, the CCP instituted a law requiring a Reincarnation Application, which must be completed and approved for all lamas wishing to reincarnate. In 1995, the Dalai Lama recognized the 11th Panchen Lama, who was then a 6-year-old Tibetan boy, growing up under Chinese rule. The search team of China’s State Council rejected this recognition. The boy disappeared and an official story was released that he was being raised in anonymity in a Chinese home, doing well in school, and had no interest in religion.

Just before Christmas, on Dec. 23, 2021, President Joe Biden signed the Uyghur Forced Labor Prevention Act into law, in order to prevent the importation of products made with slave labor in Xinjiang.

Also in December, Beijing imposed sanctions on members of the USCIRF in retaliation for penalties that the U.S. government imposed on Chinese officials over human rights abuses in Xinjiang. In response, USCIRF issued a statement saying that it condemned the CCP’s sanctions and that it supported Washington’s diplomatic boycott of the Winter Olympics.

The Universal Declaration of Human Rights includes freedom of religion as a basic human right. The U.S. government also supports religious freedom in China and around the world.

Apart from trade, the America COMPETES Act, passed by the U.S. House of Representatives in February, provides additional support to Tibetan Buddhism, demanding the CCP not to interfere with the selection of religious leaders. It also calls for the creation of a Tibet desk at the U.S. Embassy in Beijing.