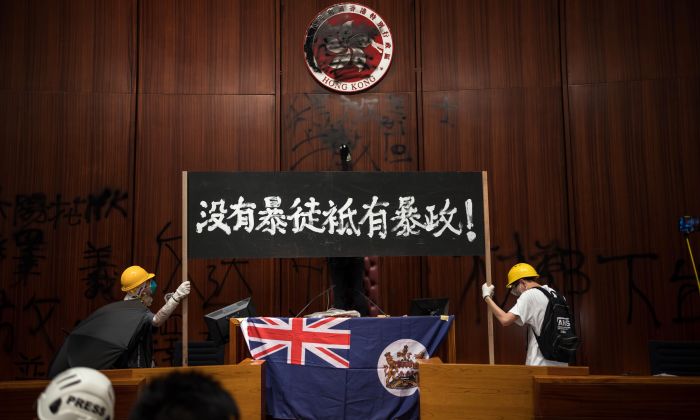 Protesters hold a banner with the words “No Rioters, Only Tyranny” at the Legislative Council to protest against the extradition bill in Hong Kong on July 1, 2019. (Billy H.C. Kwok/Getty Images)
Social Issues

The Chinese regime used harsh language to criticize Hong Kong protesters who broke into the Legislative Council (LegCo) building on July 1 as anger over a controversial extradition bill intensified.

Analysts say the incensed response from Beijing indicated that it was fearful of how such protests could jeopardize its rule.

In recent weeks, Hongkongers have staged mass protests against a bill that would allow the Chinese regime to seek extradition of criminal suspects, with many worried that the city government would be pressured to hand over individuals to face trial in China’s opaque legal system.

On July 1, after roughly 550,000 Hongkongers attended an annual march themed around protesting Beijing’s increased encroachment on local affairs since it reverted from British to Chinese rule in 1997.

But it was overshadowed by a group of young protesters who stormed the LegCo after breaking into the building by shattering the glass doors at around 9 p.m.

The day after, Chinese authorities expressed its anger in a tough tone.

State-run media Xinhua, stated in a July 2 commentary that the Hong Kong protesters who entered LegCo were “extreme radicals” whose “savage acts are a great provocation.”

Geng Shuang, spokesman for China’s Ministry of Foreign Affairs, also lashed out at foreign governments that expressed concerns about the extradition bill, during a July 2 daily press briefing.

UK foreign secretary Jeremy Hunt posted on Twitter on July 1: “No violence is acceptable but HK people MUST preserve right to peaceful protest exercised within the law, as hundreds of thousands of brave people showed today.”

In response to Hunt’s comments, Geng said: “Recently, the Chinese side has repeatedly told the United Kingdom about our position on Hong Kong… the UK ignored China’s concerns and frequently made irresponsible comments on Hong Kong affairs.”

U.S. President Donald Trump, when answering a reporter’s question about the Hong Kong protests at the White House on July 1, similarly voiced support for Hongkongers: “Well, they’re looking for democracy. And I think most people want democracy. Unfortunately, some governments don’t want democracy.”

Geng responded to Trump’s comments: “We once again warn other countries… don’t support the rioters in any way. Don’t send out any wrong signals.”

U.S.-based Chinese affairs commentator Tang Jingyuan told The Epoch Times on July 2 that mainland China has seen an increase in local protests, which has Beijing worried that “people inside China will do what Hongkongers did to protect their interests.”

Since the Hong Kong protests have surfaced, Beijing has tightened censorship: police in major cities have begun checking people’s phones to see if they have pictures or videos of Hong Kong protests. Keywords related to Hong Kong are banned on social media.

The city’s protests represent a challenge to Beijing’s rule; hence, the Chinese regime is worried, Tang said. “It can be described in this metaphor: dry wood has covered all of China, and the Hong Kong protests is a big fire. A spark from Hong Kong can burn the whole of China.”

On the other hand, Tang said, the Chinese regime cannot control the situation in Hong Kong, and wants to find an excuse for a tougher suppression.

“Now it calls the protesters rioters and extremists, then it has an excuse if it wants to use force in Hong Kong,” Tang said.