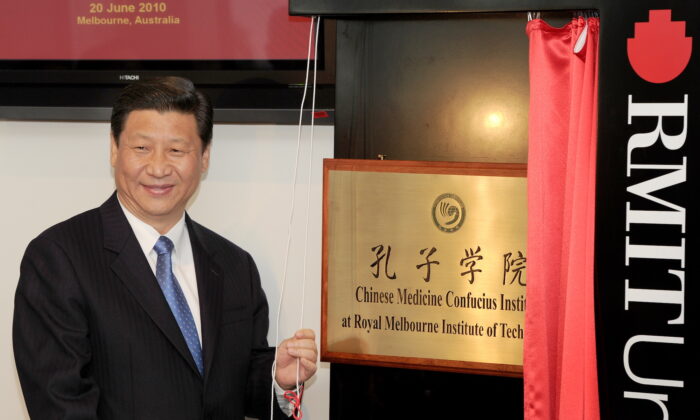 Australia’s taxpayer-funded university research sector has long been targeted by authoritarian regimes resulting in the transfer of sensitive research, with a new government report specifically identifying the Chinese regime as the largest, but not the only, culprit of foreign interference.

In the report, the Parliamentary Joint Committee on Intelligence and Security (PJCIS) found several instances where staff and students were subject to sustained campaigns of intimidation, harassment, and censorship when they were outspoken on campus.

“This resulted in the transfer of sensitive research to authoritarian regimes and their militaries and threats to the safety of domestic and international students,” Committee Chair Sen. James Paterson said.

The committee presented 27 unanimous and bipartisan recommendations to address the threats posed by foreign interference on the nation’s critical research institutions.

Paterson wrote in News Corp’s The Australian that universities needed to face the “ugly reality” that many academics and students, both domestic and international, were fearful of their safety on campus.

The committee said more needed to be done to protect students, academics, and safeguard sensitive research.

“We cannot allow Australian research and technology to be weaponised to surveil and oppress Uyghur and other minorities—as has tragically been the case,” Paterson said.

The committee recommended a risk-based audit for Australian Research Council grants approved over the past decade to determine any exposure associated with talent recruitment programs, of which the Thousand Talents Program is just “one amongst many.”

“Taxpayers should have confidence that Australian-funded research is not being unlawfully and unethically appropriated,” Paterson said.

“I come to Australia, and still I’m not free,” Lei Chen, a mainland student using a pseudonym for safety, told HRW.

“We look forward to working with Australian universities to ensure these recommendations are adopted and implemented as soon as possible and that students and staff feel a new sense of protection and freedom moving forward,” McNeill said.

The report also pointed out that the CCP-funded CIs were but one avenue the CCP used to spread influence in Australian universities through soft power.

“China sees the CI as its agent of soft power, an exporter of Chinese culture and influence, and an important element of the global Grand Propaganda strategy,” Chen said.

The committee called on Foreign Minister Marise Payne to exercise her powers granted through the Foreign Relations Act, under which she previously tore up the Victorian state government’s Belt and Road deal, to determine the national interest of the country’s 13 CIs.

Paterson noted that many European universities were closing their CIs after re-evaluating the compatibility of the institutes and their own national values.

“That’s why we’re calling on host universities and the foreign minister urgently to mitigate these threats by protecting academic freedom, free speech, and university autonomy,” he said.

Payne was also called on to determine whether the agreement between Monash University and COMAC (Commercial Aircraft Corporation of China) was in line with the national interest.

“COMAC already has been sanctioned by the U.S. government. Despite this, Monash University has refused to re-evaluate its relationship with it. If Monash is unwilling to do so, it falls to the foreign minister to scrutinise the arrangements in the national interest,” Paterson said.

The Group of Eight (Go8), comprised of universities that undertake 70 percent of Australia’s university research, said their commitment to Australia’s national security was unwavering.

Go8 Chief Executive Vicki Thompson said the geopolitical situation in Australia had changed significantly since the onset of the COVID-19 pandemic and noted several recommendations.

“We are committed to protecting that which must be protected and being proactive to any potential threats, while safeguarding our place as world research leaders,” she said.

“There remains significant work to be done to safeguard our research institutions as well as the thousands of students who benefit from studying at Australian universities every year,” he said.