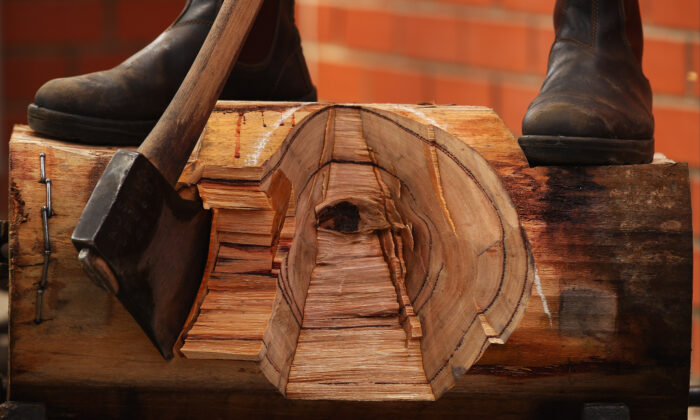 A competitor cuts a log in the Woodchop Stadium during the 2012 Sydney Royal Easter Show at the Sydney Showground on April 5, 2012 in Sydney, Australia. (Mark Kolbe/Getty Images)
Australia

The General Administration of Customs of China claimed it found live bark beetle (also known as the eastern five-spined engraver) in shipments from the state, after claiming the same pests were found in logs from Queensland.

The suspension was put in place on Nov. 11.

“There is concern around the effectiveness of fumigation treatments on shipments of bushfire affected logs for export,” Agriculture Minister David Littleproud told AAP on Nov. 12.

The department is working to address the concerns raised by the customs administrator and is boosting treatment and inspection measures.

The Australian Forest Products Association said it was aware of the suspension and was working to obtain more details from Chinese officials about the incident and how it can be addressed, according to a statement to The Epoch Times.

Victorian Premier Daniel Andrews said the state’s commissioner in Shanghai had stressed the importance of the Victoria-China trade relationship.

“We export the best products in the world of their kind,” Andrews’ told reporters.

“We wouldn’t want to see any barriers to us exporting, not just what we used to export but indeed new products and more of the same products, because that’s all about jobs.”

On Nov. 11, the Victorian opposition put forward a motion in Parliament for the Andrews’ government to request the Chinese Communist Party (CCP) reverse its trade blockade of key Victorian exports (including barley, wine, beef, and lobster), and to rebuke the CCP for its actions.

The motion did not pass, according to a statement.

“All the Labor and crossbench MPs who voted against this motion have let down Victorian farmers and exporters,” Opposition Leader in the Victorian Upper House David Davis said.

“Daniel Andrews refuses even to invoke the dispute resolution processes embedded in the dodgy Belt and Road deal he signed with the Chinese Communist Government.”

Andrews has been under increasing scrutiny over the last several months due to his decision to sign the state up for the Belt and Road Initiative with the CCP’s National Development and Reform Commission.

The latest action by Beijing expands an ever-growing list of Australian exports banned or suspended from entering the country.

The timing of the bans followed the Chinese Ambassador’s public displeasure at Foreign Minister Marise Payne’s calls for an inquiry into the origins of COVID-19.

Australia’s largest grain exporter, CBH Group, had its shipments suspended by the customs administrator in Sept. after again, finding “pests” in the shipment.