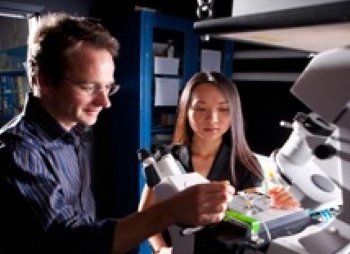 By Conan Milner
biggersmaller
Print
Imagine the power to remotely control the behavior of another being. It sounds like science fiction, but researchers at the University of Buffalo (UB) recently demonstrated that they can indeed stimulate cells to manipulate the movements of tiny worms.

Utilizing clusters of heated, magnetic nanoparticles, scientists targeted cell membranes which allowed them to remotely control ion channels, neurons, and even animal behavior. Their findings were published earlier this month in Nature Nanotechnology.

“By developing a method that allows us to use magnetic fields to stimulate cells both in vitro and in vivo, this research will help us unravel the signaling networks that control animal behavior,” said Arnd Pralle, PhD, assistant professor of physics in the UB College of Arts and Sciences and senior/corresponding author on the paper in a press release.

The method for control involves exposing a cell membrane to a radiofrequency magnetic field that researchers say is comparable to an MRI. The magnetic field heats the nanoparticles within the organism thus stimulating the cell. With these stimulated cells scientists discovered that the worms (they used small nematodes, C. elegans) reversed course once their temperature reached 93.2 degrees Fahrenheit—the same threshold that in nature provokes an avoidance response, according to Pralle.

Targeting nanoparticles near the mouth of the worms, researchers revealed evidence for their technique in a short video. At the beginning of the clip the worms are seen crawling around of their own volition. When the magnetic field is switched on, most of the worms immediately change course.

Precise temperature is an important factor in this experiment, and researchers admit that little is still known about heat conduction in tissue at the nanoscale.

UB researchers even developed a special fluorescent probe that could measure when nanoparticles were heated to the target temperature—93.2 degrees F.

“The fluorescence intensity indicates the change in temperature,” explained Pralle. “It’s kind of a nanoscale thermometer and could allow scientists to more easily measure temperature changes at the nanoscale.”

At just six nanometers these tiny nanoparticles can easily diffuse between cells. Once exposed to the magnetic field, researchers noted that the cells were activated uniformly across a large area. This is evidence that the method can also be used in whole body applications, according to the UB report.

Pralle believes that these whole-animal studies could produce innovative new pharmaceuticals to treat conditions such as neurological disorders resulting from insufficient neuro-stimulation.

Researchers say the next step is finding other behaviors that can be controlled in this way.

See a video of the experiment here: http://www.youtube.com/watch?v=u9MqrLcLaCk