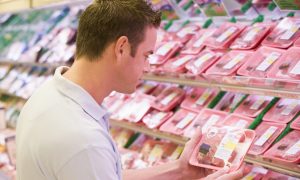 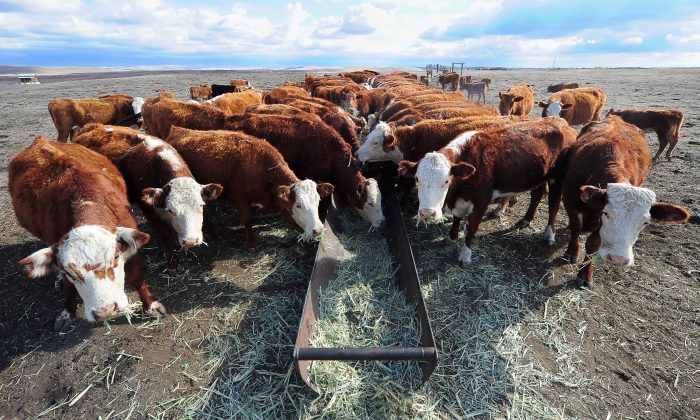 Beef prices in the United States, already at a historic high after rising nearly 20 percent over the last year, are projected to rise even more this year. (Frederic J. Brown/AFP/Getty Images)
Business

Beef prices in the United States, already at a historic high after rising nearly 20 percent over the last year, are projected to rise even more this year.

Prices for all cuts are projected to increase 5 to 6 percent this year, more than any other food product.

That’s the bad news. The good news? Prices should level off or even drop next year.

Unlike some rising food prices, the rising cost of beef has little to do with the California drought. Instead, a series of other weather events has spurred the rise. A big drought in the cornbelt several years ago caused prices to rise for corn and soybeans—grains that now primarily feed animals—while another drought in Texas, Oklahoma, Kansas, Colorado, and New Mexico directly impacted cow-calf herds. And a snowstorm on the northern plains killed thousands of cattle in December 2013.

Producers are now working on expanding their herds, holding back some cattle from the market to breed more. This leaves fewer cattle to turn into beef for buyers, which has helped spur the almost constant price increases. Projected production for 2015 is only 24 million pounds, a five-year low down from 26.3 million in 2010.

The method, though, will help rebuild the depleted herds across the nation, and should start paying off as early as next year. The difficulty with replenishing the beef supply, versus other meats, is the time it takes to raise a calf—roughly 16 to 18 months from birth until cattle are ready for market.

“We’ll see a little bit of a shortage over the summer,” said Brenda Boetel, professor of Agricultural Economics at the University of Wisconsin–River Falls. “I think beef prices will peak in the next couple weeks. It will go back up in the fall, but it probably won’t be as high as we’re seeing it, then next year the prices will be lower.”

Beef prices are projected to rise the most out of any core product people buy at grocery stores—up to 6 percent, compared to the typical food price increase of 2.6 percent, according to the U.S. Department of Agriculture’s Economic Research Service. Annamarie Kuhns, an economist with the service, said initial projections for next year will come out in July.

Cattle futures are a good indicator of prices in the future. Futures for finished beef for April 2016 are trading at $1.49 a pound, down from $2.15 per pound for August 2015, David Johnson, vice president of marketing for Equity Cooperative Livestock Sales Association told the Gazette Xtra. That’s another indication prices will drop next year.

While prices are set to rise more in the short term, the drop in prices for corn and soybean have also helped limit the increases and should help the cost next year as well.

Prices Force Some to Switch

Americans have gradually been buying less beef and more chicken since the peak of beef purchases in the mid ’70s. Americans bought 88.8 pounds of beef per person in 1976. That amount leveled out around 62 pounds from 1991 through 2007, but has since dropped again to 54.5 pounds in 2012, according to estimates from the U.S. Department of Agriculture.

Pork consumption dropped in 2011 to 42.3 pounds per person per year, the lowest level since 1978, but the fluctuation was fairly small. Overall, pork habits have stayed fairly consistent over the past 100 years. By contrast, chicken has steadily increased almost every year, from 10.4 pounds in 1909 to a high of 60.9 pounds per person in 2006, although it’s dropped slightly to 56.6 pounds per person per year as of 2012 according to the U.S. Department of Agriculture.

Beef has been the subject of more health scares than chicken, which has also contributed to the gradual decline in consumption.

Another factor plays into it is the evolution of food.

“When I was young you didn’t have chicken fingers, chicken nuggets, or anything like that. You bought a chicken and you cooked it and cut it up at the table,” Dunn said, noting he and his siblings were always fighting over the drumsticks.

“But then they started selling the pieces, so we could buy a pack of frozen drumsticks and cook that, we didn’t have to worry, and so that was kind of the intermediate stage. Now they debone chicken and make all kinds of things. It’s gotten a lot more user-friendly. With beef we’ve always had hamburger and things like that, so there hasn’t been the same advances to adjust to changes in lifestyles and things like family sizes.”

Some American consumers are still buying beef no matter how high the price goes, despite the growing gap between beef and pork—from $0.50 back in 2000 to over $2.00 now—and beef and chicken. When accounting for the price increases, spending per person on beef has actually remained about the same, around 47 percent of the dollars that people spend on meat, according to the National Cattlemen’s Beef Association.

Restaurant managers feel comfortable putting high-priced entrees on the menu such as steak right now, because the industry is doing well, as opposed to back during the recession when many establishments resorted to deals like two meals for $20 to entice people to dine out.

Out of 1,068 respondents to the National Cattlemen’s Beef Association 2014 Consumer Beef Index, 83 percent said ground beef is worth the price and 70 percent said steaks are worth the price. The 1,000 people surveyed online for Oklahoma State University’s Food Demand Survey for March 2015 said they’re willing to spend $7.89 for a pound of steak from a grocery store, up from $6.59 a year prior, and $4.61 for a pound of hamburger meat, up from $4.28 a year prior. At the same time, consumers also said they’re more willing to spend more for pork chops, chicken breast, and chicken wings.

Any time now, though, pork prices may drop since the meat has become more plentiful, which could attract some beef consumers.

In August 2014, Russia banned almost all imports from Western countries in response to sanctions imposed on Russia by the West, setting off a chain reaction. The ban prompted countries that normally send pork to Russia to look for other buyers, leading to increased competition for American products in places like Mexico and Japan. As a result, more American pork, in particular, is staying home.

Also, the strong dollar makes it more expensive for countries to purchase American products. Thus more U.S. pork is staying in the country rather than being exported, contributing to the greater price gap between beef and pork and beef and chicken.

“How long before consumers start pushing back and say ‘I’m not going to pay this high price of beef?’ I’ve been thinking it’s going to happen for a while but it hasn’t,” said Boetel. “But that’s the good thing, we have more pork, pork production’s up and we’re exporting less, so that means a whole lot more on the shelf in the United States.”

One factor has helped beef prices from going even higher—more imports.

While the United States is exporting less beef, it’s also been importing more, thanks to the strong dollar.

Imports reached a record high of 2.9 million pounds last year, and are projected to come in at 2.8 million pounds this year. Imports are usually grass-fed meat from places like Mexico, Canada, and Australia, which is mostly used as hamburger meat.

“As far as the better cuts, you don’t get them without feeding the animals grain,” Dunn noted.

Related Coverage
Grazin’ on Delectable Burgers, Straight From the Farm

“People are willing to pay more for grain-fed beef because of the difference in marbling,” Boetel said.

While exports are down, they’re still represent a large percentage of overall beef production—14 percent in 2014, up from 1.4 percent in 1984.

“A big reason export markets continue to expand are the strength of the U.S. dollar and the growing affluence in other countries, particularly Asia,” said Austin Arndt, president of the Wisconsin Cattlemen’s Association and partner in Arndt Farms. South Korea, Hong Kong, and Japan are three of the top five buyers of U.S. beef and veal.