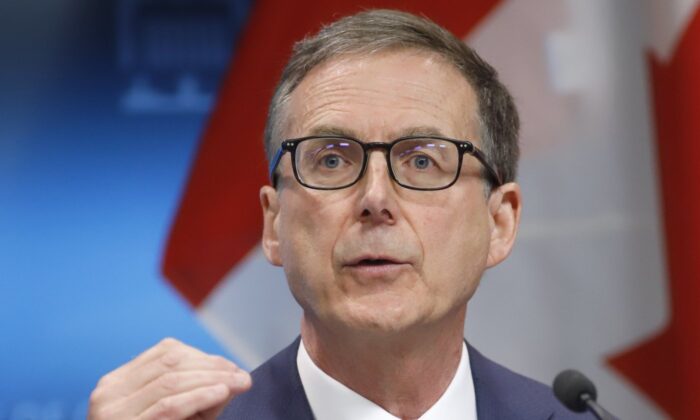 Governor of the Bank of Canada Tiff Macklem speaks at a press conference in Ottawa on June 9, 2022. (The Canadian Press/ Patrick Doyle)
Economy

More Hikes to Come After Bank of Canada Raises Rate by 0.75 Percent

Doubts about avoiding a recession grow stronger
By Rahul Vaidyanath

OTTAWA—As widely expected, the Bank of Canada raised its key rate by 75 basis points (0.75 percent) to 3.25 percent on Sept. 7 to continue dampening demand to fight inflation. Additionally, it signalled that more rate hikes are coming, which is leading some economists to forecast an impending recession and not the “soft landing” the central bank projected in July.

“The issue about whether it can pull off a soft landing, I think that issue is secondary now,” Jean-Paul Lam, economics professor at the University of Waterloo and former BoC assistant chief economist, told The Epoch Times.

He added that the BoC is not being explicit about causing “some pain” to businesses and households like U.S. Federal Reserve chair Jerome Powell did in his speech at Jackson Hole in late August.

“It is basically language that they would, come hell or high water, get inflation down to 2 percent even if that caused a lot of pain to people,” Lam said about the Bank of Canada statement.

This is the highest the central bank’s policy rate has been since April 2008, when it was 3.5 percent, just prior to the onset of the financial crisis.

The Bank of Canada previously said the neutral range for its overnight rate target–where the economy is neither being stimulated nor dampened–was estimated to be between 2 and 3 percent. At 3.25 percent, the interest rate is now in restrictive territory and will act to cool down the economy and inflation.

“The Governing Council still judges that the policy interest rate will need to rise further,” said the central bank in its official statement.

“We will be assessing how much higher interest rates need to go to return inflation to target.”

RBC senior economist Josh Nye said he expects a “mild recession in 2023,” while Tony Stillo, director of Canada Economics at Oxford Economics, said, “In our view, Canada is now likely to fall into a moderate recession by late 2022.”

Lam said that the BoC is not going to stop hiking rates until core inflation and short-term inflation expectations start coming down, but that he thinks we’re not very far from the end of rate increases.

Bank of Canada governor Tiff Macklem, in an Aug. 16 National Post editorial, said he believes inflation may have peaked. July inflation came in at 7.6 percent—down from June’s reading of 8.1 percent. However, the BoC’s three core measures of inflation have not peaked, and their average rose to above 5 percent in July.

The BoC attributed the small drop in inflation to gasoline prices but countered this development with the fact that “data indicate a further broadening of price pressures, particularly in services.”

Lam said the July inflation report was not a good one despite the slight drop in headline inflation.

The central bank said that short-term inflation expectations are still high and that “the longer this continues, the greater the risk that elevated inflation becomes entrenched.”

Lam said inflation expectations are “a really big concern,” since if they get out of hand, the bank’s job becomes “exponentially more difficult” to bring down inflation.

The BoC has now raised its policy rate by a full 3 percentage points since March, and signs that the economy is slowing are becoming more widespread. But certain segments of the economy remain robust.

The Canadian economy grew at an annual rate of 3.3 percent in the second quarter, which was weaker than the BoC’s projections. The preliminary estimate of July’s gross domestic product is for a drop of 0.1 percent.

The labour market lost jobs in June and July, and the BoC also noted that U.S. economic activity had moderated. The Fed has raised rates by 2.25 percent since March.

However, BMO chief economist Doug Porter noted on Aug. 31 that consumer spending was very strong in the second quarter—soaring at a 9.7 percent annualized clip—and that households still have “considerable spending firepower” based on their buildup of savings over the past 10 quarters.

The downside to this is that consumer confidence plunged in July. TD Securities said on Sept. 2, in its preview of the Bank of Canada rate decision, that this could cause a portion of the buildup of household savings to “become permanent.”

Some drivers of inflation are losing steam, but other factors are supporting it.

The U.S. benchmark West Texas Intermediate oil price has been below US$100 per barrel for over a month now. Global supply chain bottlenecks have been easing, and consumer demand for goods—notably for housing—is waning.

According to the Canadian Real Estate Association, national home sales were down 5.3 percent in July and the number of transactions fell 29.3 percent.

On the other hand, the Canadian dollar was trading below US$0.76 prior to the BoC announcement. A low currency causes prices of imports to rise, which boosts inflation.

And the central bank noted that while some commodity prices have fallen, natural gas prices have risen.

“The big headwinds that might be coming in the next few months are the energy crisis Europe might face, and that’s going to push energy prices up for everyone again,” Lam said.