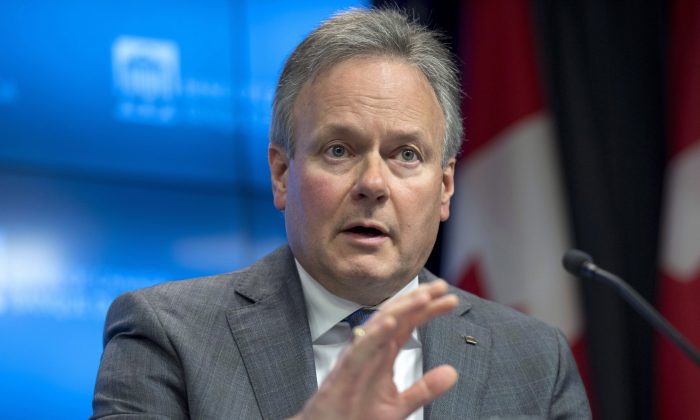 Bank of Canada Governor Stephen Poloz speaks to reporters during a press conference following the release of the Financial System Review in Ottawa on Nov. 28, 2017. The bank says policy measures are doing the job of reducing housing market vulnerabilities. (The Canadian Press/Justin Tang)
Economy

OTTAWA—Housing-related concerns remain the biggest threat to the financial system in Canada, but an improving economy, tighter lending standards, and higher interest rates are brightening the outlook, according to the Bank of Canada’s semiannual Financial System Review (FSR) published on Nov. 28.

The FSR summarizes the bank’s judgment on the main vulnerabilities and risks to financial stability.

A vulnerability in the financial system is a pre-existing condition that can magnify the impact of economic shocks. As has been the case since the June 2014 FSR, the two most important vulnerabilities are the elevated debt levels of Canadian households and imbalances in the housing market.

“The vulnerabilities remain elevated. … That is of concern to us,” Bank of Canada Governor Stephen Poloz said in the bank’s press conference.

However, the BoC emphasized that mortgage qualification stress tests are helping to eliminate some of the riskiest debt, thus gradually reducing the vulnerabilities. But given the large stock of outstanding debt, a significant decline in the vulnerability may be several years away.

Canadians hold about $1.70 in debt for every dollar of disposable income. Mortgages and home equity lines of credit (HELOCs) account for over 80 percent of household debt.

The bank highlights the risk with HELOCs as house prices rise. Households borrow from their new-found equity causing indebtedness to rise.

But the BoC says stress tests for high-ratio mortgages—those with loan-to-value ratios of more than 80 percent that require insurance—have been reducing the origination of these mortgages.

The proportion of highly indebted households (loan-to-income ratio greater than 450 percent) among new borrowers recently fell from 19 percent to 7 percent.

The Office of the Superintendent of Financial Institutions (OSFI) will require a stress test for low-ratio (uninsured) mortgages in the new year. Borrowers will have to qualify at a rate the greater of 2 percent over the contract rate or the BoC’s posted five-year rate. The BoC expects this change to have a comparable impact to what has been observed with high-ratio mortgages.

The industry has suggested that non-federally regulated lenders, such as provincially regulated credit unions, could see an increase in business when the rules go into effect.

The bank expects to see some migration of mortgages to credit unions due to OSFI’s policy, however it is unclear what the impact on aggregate indebtedness could be. The credit unions could adopt OSFI’s rule or borrowers could opt for smaller homes, make larger downpayments, or keep renting.

“I know that there are a lot of credit unions against it and the credit union default record backs it up [not implementing OSFI’s stress test],” said Rob McLister, founder of RateSpy.com, a Canadian mortgage comparison website, in a phone interview. “The problem is heavily skewed to housing markets with runaway home prices.”

In its analysis, the bank estimates that 10 percent ($15 billion) of low-ratio mortgages would not qualify under the new OSFI stress test.

“These rules that OSFI’s put out are reasonable things for people to think about on an individual level,” Poloz said. “Sometimes rules are actually a good idea from an individual point of view.

“This is not a bad way to self test.”

Poloz says he doesn’t expect the migration to credit unions to be large.

McLister says he wouldn’t be surprised if credit unions charge an extra 0.25 to 0.50 percent for borrowers who could not qualify at the federal stress test level.

Housing market imbalances—price increases primarily in the Toronto and Vancouver areas—arise from strong demand due to employment gains and net migration while supply is limited due to geography and land-use constraints.

The latest national monthly figures from the Canadian Real Estate Association (CREA) show prices climbed 9.7 percent year-over-year in October. However, monthly home sales are near their lowest levels in over two years.

The Greater Toronto Area (GTA) housing market has steadied and since June’s FSR, prices have fallen sharply, partly due to Ontario’s Fair Housing Plan. McLister has argued that the impending OSFI stress test is the biggest threat to Toronto’s housing market.

Price growth in Vancouver has risen since June due to condo prices as single-family homes remain highly unaffordable.

The central bank says that higher interest rates and housing-related policy measures will reduce the demand for homes and temper price increases going forward. This should mitigate the imbalances in the GTA and Vancouver.

“The probability of a negative external event has gone down,” said Senior Deputy Governor Carolyn Wilkins, citing the strong and synchronous global growth.

“If we were to experience that event given the level of household debt, [it] probably would be just as severe,” she added, saying that Canada’s financial system is well capitalized to withstand stress.

The second risk is a house price correction in overheated markets, which the GC judges to be moderate.