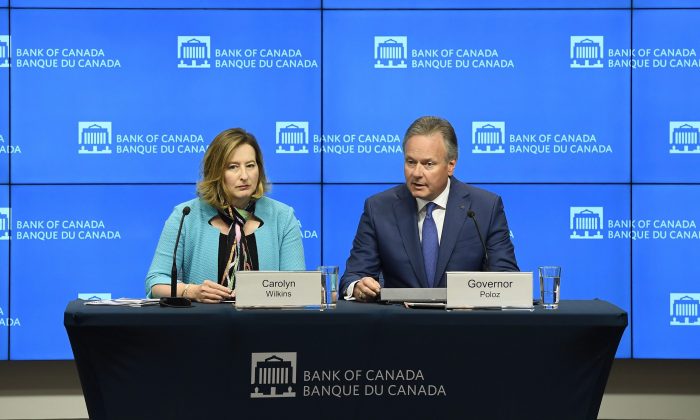 Governor of the Bank of Canada Stephen Poloz speaks as Senior Deputy Governor Carolyn Wilkins looks on after the central bank raised its overnight rate target to 1.5 percent in Ottawa on July 11, 2018. (The Canadian Press/Justin Tang)
Economy

OTTAWA—The Bank of Canada raised its key policy rate to 1.5 percent on July 11 as the economy keeps strengthening despite the onset of a potential trade war. U.S. tariffs on steel and aluminum as well as Ottawa’s July 1 retaliation on $16.6 billion of U.S. imports didn’t alter the bank’s outlook and intentions sufficiently, which led to the rate hike.

Economists had long been calling for a July rate hike and financial markets had it fully priced in. Bank of Canada Governor Stephen Poloz said his confidence in the economy has been growing over time.

Canada’s central bank reiterated that growth should average 2.0 percent from 2018 to 2020. But it cautions that if growing trade protectionism spills into auto manufacturing, it would be a significant threat to the economy. Also under threat are NAFTA renegotiations.

“The possibility of more trade protectionism is the most important threat to global prospects,” according to the bank’s July 11 press release.

Import tariffs are paid at the border and passed onto the consumer. The bank expects a very modest bump in inflation due to the already enacted measures and a subtraction of 2/3  percent from GDP cumulatively by the end of 2020—a significant loss of income to Canadians.

“Let me emphasize that monetary policy by itself could not undo the long-term damage to jobs and income that could result from rising protectionism,” said Poloz in the bank’s press conference.

But for now, the economy is operating at close to full capacity with GDP growth running slightly above its speed limit. Core inflation is close to 2 percent.

The BoC also raised the economy’s potential growth rate to 1.9 percent from 1.8 percent in April as business investment in the first quarter was stronger than expected, partially reflecting higher oil prices.

Trade tensions haven’t affected global growth, according to the BoC, and U.S. growth came in even stronger than projected in April’s Monetary Policy Report (MPR). The bank expects the U.S economy to expand by 3 percent in 2018 and 2.5 percent in 2019—well above potential.

Higher oil prices are leading to better sentiment and this is supportive of investment rising. The same applies to exports, however, the BoC pared back the anticipated rise in both due to the trade tensions by a cumulative total of 3.7 percent until the end of 2020; this is worse than in April.

The 25 percent tariff on steel and 10 percent on aluminum affect about 0.5 percent of Canadian GDP and about 35,000 jobs. The exports affected represent about 2.5 percent of the total.

The concern, of course, is whether the trade spat will spill into auto manufacturing, which makes up about 17 percent of Canadian exports. The Canadian Automobile Dealers Association (CADA) said more than 100,000 manufacturing jobs would be at immediate risk if a 25 percent tariff on automotive imports into the United States comes to fruition. CADA also said in its analysis that such a tariff could send the Canadian economy into a recession.

An escalation of trade tensions would impact growth, although the effect on inflation is two-sided: In the short-term, it would rise based on higher import costs, but in the longer term as the Canadian dollar depreciates, it would get buffeted higher.

Poloz said this scenario of slowing growth with rising inflation puts monetary policy in a difficult place. But The BoC is not going to enact monetary policy based on hypothetical scenarios, including further anticipated federal government support.

While trade uncertainty clouds the outlook, the reality is demand is strong and Canadian businesses face labour shortages and pressure to meet demand.

But there continues to be room for improvement in parts of the labour market as wage growth remains slow at 2.3 percent, long-term employment is elevated, and the youth participation rate is low. Employment in the energy sector remains a sore spot for the Canadian economy.

“Wages are a good indication of how the labour market is doing,” said Senior Deputy Governor Carolyn Wilkins.

Trade tensions and broad strength in the greenback are weighing on the Canadian dollar despite higher oil prices (roughly $10 higher than in April). The loonie is about two cents lower now than it was at the time of the BoC’s April projections (US$0.76 from US$0.78).

The TSX closed at an all-time high on July 10 so trade war uncertainty is not holding back equity gains. In fact, the bank’s Business Outlook Survey showed firms remained very positive; their upbeat business prospects seemed to outweigh any trade tensions, although the majority of the firms surveyed sell domestically. For those selling to the United States, the stronger growth there serves as somewhat of an offset to tariffs.

“Today’s relatively positive tone and unchanged tightening bias should reinforce market expectations that today’s rate hike won’t be the last this year,” said RBC economist Josh Nye in a note to clients. “The trade backdrop will of course remain key to the rates outlook, and the recent direction of global rhetoric suggests the BoC’s assumed impact of tariffs and trade uncertainty will remain fluid.”

At this stage, the bank has no reason to change its mantra that higher rates are warranted over time gradually.

For its part, RBC is calling for another 0.25 percent rate increase in the fourth quarter and two more in 2019.