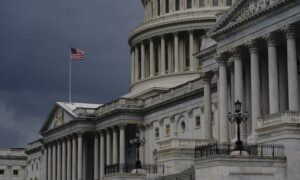 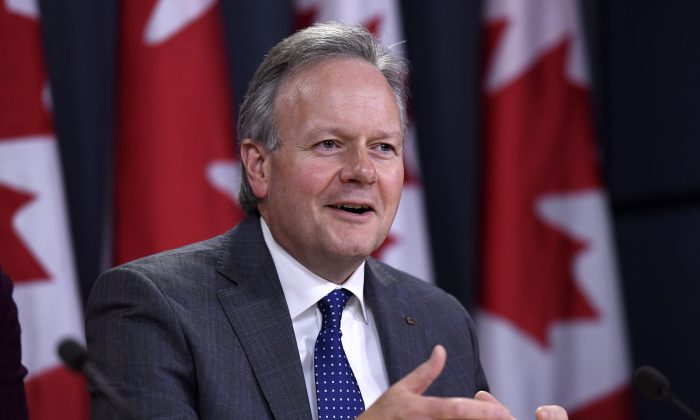 OTTAWA—The Bank of Canada painted a rosier picture of the Canadian economy on April 18, with higher growth and inflation forecasts, after a slowdown in the first quarter. It held its key policy rate at 1.25 percent, as most expected, but did not provide more clarity on future rate hikes.

“Our uncertainty is about how much and at what pace,” said Bank of Canada Governor Stephen Poloz in his press conference regarding future rate increases.

Poloz stressed that the central bank is very much data-dependent.

“The pace is a significant question mark for us given the data,” he said.

The Canadian economy is operating at close to capacity. As slack in various parts of the economy has been evaporating for the past three quarters while the BoC raised rates three times, inflation has been steadily rising to the 2 percent target.

The BoC repeated that “higher interest rates will be warranted over time,” although rates need to remain accommodative to keep inflation on target. There is still considerable stimulus in the economy given that the bank’s estimate for the neutral rate—the equilibrium rate for the economy operating at potential and with inflation at target—is still between 2.5 percent and 3.5 percent.

“The economy’s in a good place,” Poloz said. But he caveated that all is not quite normal and that without interest rates being so low, the economy wouldn’t be where it is today. Thus, the economy still needs considerable support from accommodative monetary policy.

This speaks to an ongoing gradual pace of rate hikes, an economy that still needs time to build capacity, and the particular Canadian situation of a high sensitivity to rising rates given elevated consumer debt levels.

“Everything is consistent with a gradual tightening path, which is what we’ve been expecting,” said Andrew Kelvin, senior rates strategist at TD Securities, in a phone interview.

Kelvin forecasts one more rate hike in 2018 and another in January 2019—similar to market expectations. He said markets are almost certain of a rate hike in July and are settling on closer to two rate increases a year as opposed to three.

Inflation in advanced economies—Canada’s included—has been below target for years despite extraordinarily low interest rates and government bond purchase programs in many jurisdictions.

Poloz said inflation has moved up from its trough last summer as the bank’s models predicted and that the issue was excess capacity being greater than originally measured.

“The fact is the [output] gap was bigger than we thought at the time,” Poloz said. “If you redefine potential output that would explain most of the problems.”

Every April, the bank updates its estimates for the economy’s potential growth rate. For 2018 to 2020, the BoC estimates it to be 1.8 percent. While it cautions that measuring the economy’s speed limit is “subject to considerable uncertainty,” the new estimate is an improvement over that of last April and stems from gains in labour productivity, owing to recent business investment spending.

She added that making those calls is very important so that central bankers don’t adjust policy when unnecessary.

Wage growth has also contributed to improving inflation, but it is not solely from recent minimum wage increases. The unemployment rate of 5.8 percent is the lowest since the mid-1970s, which is an indicator of slack in the labour market greatly diminishing. The BoC’s wage growth estimate of 2.7 percent is close to the 3 percent level, which it said has historically marked the point where there is no more labour market slack.

The bank reiterated that the impact of global and technological factors on inflation does not appear to be significant. Inflation has been firming as well in the United States, Japan, and Europe as the world economy exhibits synchronized growth.

But the first quarter of 2018 was weaker than the bank expected due to exports lagging and housing market activity being pulled into late 2017 to get ahead of tighter mortgage regulations that came into effect in 2018. This is seen as a temporary hiccup.

The bank’s estimate of first-quarter growth fell to 1.3 percent from 2.5 percent in January, but it forecasted a rebound in the second quarter resulting in 2 percent growth over the first half of 2018.

“We have seen data disappoint relative to the bank’s forecast,” Kelvin said, adding that the bank is more confident than he would have expected regarding a rebound in the second quarter.

Heightened Worry for Bank of Canada on Trade

The BoC expects the rebound to be spurred by housing resales recovering and the positive trend in investment spending. Imports data show a sharp rise in machinery and equipment spending.

Outside of the energy sector, which accounts for about 20 percent of business investment in Canada, the trend in capital spending is positive. The bank’s spring 2018 Business Outlook Survey showed positive sentiment among businesses despite tax and regulatory challenges.

The biggest risk for the Canadian economy remains trade-related. A shift to more protectionism could result in lower confidence and slower growth.

But for now, the BoC assumes that NAFTA remains in force. The tariffs announced by the United States and China will be factored into the forecast if and when they come into effect.

Financial markets interpreted the bank’s latest news as dovish—the BoC being more cautious about raising rates—with the Canadian dollar falling sharply after the announcement before recovering some of its losses.