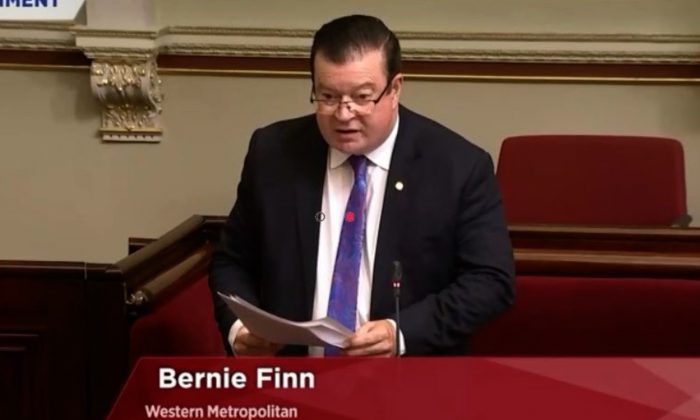 MELBOURNE, Australia—Victorian Member of Parliament, Bernie Finn, has called on the attorney general to cooperate with the federal government to stop the practice of human organ trafficking.

In a speech before the Victorian Parliament on Feb. 21, Finn, a Liberal Party member who is also part of Victorian Legislative Council, said that 3 of the 12 recommendations from a report by the Human Rights Sub-Committee for the inquiry into Human Organ Trafficking and Organ Transplant Tourism could be applied in Victoria.

“[T]his might not seem like a state matter at all, but in fact it does have state implications … of the 12 recommendations that the subcommittee made, three of those have very strong state implications,” Finn said.

The report, entitled “Compassion, Not Commerce: An inquiry into human organ trafficking and organ transplant tourism” was released on Dec. 3, 2018 and considered whether Australia’s organ trafficking laws should be extended to prohibit citizens from travelling overseas for unethical transplants, and whether Australia should accede to the Council of Europe Convention against Trafficking in Human Organs, that went into force March 1, 2018.

International Human Rights are not “Internal Affairs” – DAFOH
China’s 20 year history of #forced organ harvesting has been described as a Cold Genocide. The broader scope of this genocide continues to receive international attention. #medicinehttps://t.co/NMgPKiEFCT pic.twitter.com/71ZIrTdBAT

Recommendation five is related to mandatory reporting protocols by medical doctors who care for patients suspected to have received a commercial transplant.

Recommendation six is related to criminal proceedings, under the Council of Europe Convention against Trafficking in Human Organs, against the illegal removal of human organs from living or deceased donors.

Recommendation 12, is related to the commercial display of human tissue where “verifiable documentation of the consent of a donor person or their next of kin” must be produced.

The report acknowledged experts’ concerns that organs used in transplants in China were allegedly sourced from political prisoners, prisoners of conscience, and executed prisoners.

“I have been worried about and have expressed opposition to for quite some years, and that is the practice of the Government of China, to have a forcible organ harvesting, followed by human organs trafficking, and organs tourism,” Finn said.

During the inquiry that began in 2017, experts gave evidence of cases of transplant abuse that have been reportedly occurring in China as well as across the Asia-Pacific region.

The committee said they were not in the position to decide on the truth of the allegations against the Chinese regime but were “inclined to conclude that organ trafficking has occurred in China and may continue to occur, albeit on a lesser scale.” Given the Chinese Embassy’s silence on the allegations, the sub-committee recommended that the Australian government monitor and express concern about the Chinese Communist Party’s (CCP) transplantation practices.

According to in-depth investigations by former Canadian Secretary of State, David Kilgour, and human rights lawyer, David Matas, China has been harvesting organs from prisoners of conscience on a mass scale—mainly Falun Dafa practitioners—fuelling a multi-billion-dollar business that benefits CCP officials. Falun Dafa, or Falun Gong, is a traditional spiritual meditation practice that is heavily persecuted in China.

“[T]he onus is on the Chinese authorities to demonstrate to the world that they are not overseeing or permitting the practice of harvesting organs from executed prisoners without their knowledge and free consent. In the absence of such a demonstration by the Chinese authorities, the world is entitled to question assertions of claims to the contrary,” the Australian report stated.

Spokesperson for Doctors Against Forced Organ Harvesting (DAFOH)—an organisation founded by medical doctors that provides objective findings of unethical and illegal organ harvesting—Dr. Liza Lau, said that Finn’s speech in the Victorian Parliament was an important first step in addressing the issue of forced organ harvesting by the CCP.

“We have good reason to believe that the Chinese government’s [practice of forced organ harvesting] is continuing to occur, and it would be really important for the state government to take action based on the recently the released summary recommendation from human rights sub committee.

“I feel that people who can’t speak for themselves are finally going to get a voice from people like Bernie Finn speaking up for them,” Lau said.

The report also recommended that Australia should accede to the Council of Europe convention.

“Australia has an obligation to demonstrate leadership as a notable organ-importing jurisdiction, and now has the opportunity to do so through accession to the convention,” it said.

Finn noted that the significant section of the report would have to be carried out by the states.

“So what I am asking the attorney general to do is to cooperate with the federal government in its attempts to crackdown on human organ transplants, and human organ trafficking, and ensure that Victoria plays its role in stopping what is a pretty loathsome and despicable practice.”