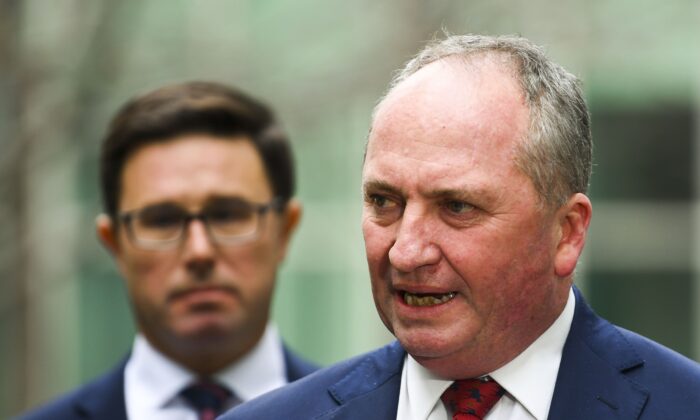 Net-zero and leadership will be two issues discussed by the Nationals party room on the weekend after the regional party successfully withstood the electoral onslaught on May 21 that saw its Coalition partner, the Liberal Party, lose 19 seats.

After every election, the Nationals hold a party room meeting to decide their future policy platform and leader. One major issue of contention, between moderate and conservative MPs, has been whether to continue supporting a net-zero emissions target by 2050 for Australia.

Queensland Senator Matt Canavan has been vocal in his opposition to the policy saying that “when we surrender to the left on these issues, we lose.”

“At the 2019 election, we dumped the National Energy Guarantee, we fought against radical climate action, and we won the election. In 2022, we did the polar opposite, we adopted net-zero, tried give ourselves a ‘green-wash’ and we had catastrophic losses,” he told Sky News Australia on May 24.

Last year, then-Prime Minister Scott Morrison set a net-zero target for Australia after sustained pressure from the media. The move, however, failed to win over inner-city and younger voters, who decided to bank their vote with the “teal” independents and Australian Greens—both are promising more aggressive climate change policies.

The teals are pledging a 60 percent emissions cut by 2030, compared to the existing target of 26-28 percent under the previous government. Such policies will force individuals and companies to completely reconfigure the power grid so that it can sustainably power the economy, businesses, and even homes 24-7.

Yet the Coalition’s defeat, largely to the teals and Greens, has been interpreted by some MPs as a failure by the outgoing government to take climate change action seriously.

“Some of the language around net-zero was damaging,” Nationals MP for the division of Riverina, Michael McCormack told AAP on May 24. “In the midst of an election campaign that was already very closely contested, I know it didn’t help.”

Victorian state Nationals leader Peter Walsh has also come out saying he did not support “watering down” the climate targets.

“We believe that continuing to take action now will secure a more prosperous, productive and profitable future for our farmers and those businesses along the supply chain that rely on a thriving agriculture sector to survive,” he said in a statement on May 24.

While Darren Chester, the federal member for Gippsland in Victoria, said that the election result proved that the Nationals needed to keep to a climate change target or else put the electoral chances of its Coalition and state National branches at risk.

“We need to take some responsibility for the Liberal losses in the city with the more extreme views of some colleagues undoubtedly hurting the chances of our city cousins,” he wrote on Facebook on May 23.

“When the wealth-belt is prepared to toss out a moderate, experienced, and capable treasurer, for an unproven activist, you need to listen to the message, regardless of how unpalatable it is,” he said in reference to the ousting of former federal Treasurer Josh Frydenberg by teal independent Dr. Monique Ryan.

Current leader Barnaby Joyce has stated while he was happy to stay committed to net-zero he would leave it to the party to decide.

“If other people want to discuss it, that’s their right. My intent is to stick to the deal that I made,” he told the Australian Broadcasting Corporation on May 24.

Meanwhile, former deputy prime minister and Nationals elder John Anderson has hinted that support for net-zero from younger voters was because the debate on climate change had been over-simplified.

“We’re not confronting the real limitations of what we can do, as well as all the real possibilities of what we can do,” he told Sky News Australia on May 23. “We can help feed a world that’s facing a global food crisis, but it means we must be realistic about the fact that we need a lot of fossil fuel energy to do it. That’s a moral cause.”

“This is one of the great problems of the 30-second grab, which has now morphed into an addiction to social media where the spontaneous, clever wit, and nastiness—outweigh considered proper debate—and the nation is the loser.”