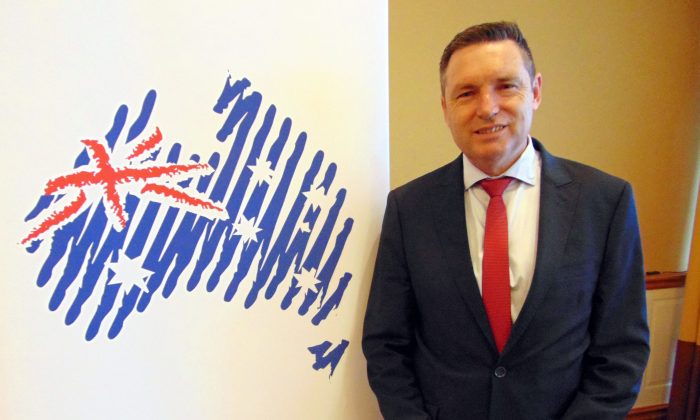 GOLD COAST, Australia—A candidate running for public office in Australia’s general election on May 18 is backing calls by the Australian Conservatives Party to hold a public inquiry into foreign influence from communist China.

The former Toowoomba city councillor, who served two terms in 2000 and 2004, described the current level of foreign influence from communist China as a “real worry,” saying that Australia cannot afford to ignore the espionage any longer.

“We are very worried as a party about the influence Chinese organisations that seem to be arms of the state are having in our universities,” he told the Epoch Times at the Australian Conservatives’s April 30 campaign launch at the Surfers Paradise Marriott Resort on the Gold Coast. They’re also trying to “influence the political process,” he said.

Shelton is particularly concerned about Confucius Institutes (CIs), which are advertised by the Chinese Communist Party’s (CCP’s) Office of Chinese Language Council International, also known as HanBan, as educational organisations to promote Chinese culture and language. Western intelligence agencies warn that the institutes, which are hosted by 12 universities across Australia, are actually used as part of the Chinese regime’s apparatus to gain influence abroad.

CIs are funded by the CCP through HanBan and have been documented to be involved in organising protests against topics the CCP considers to be a threat to the stability of its rule, according to a staff report by the U.S.-China Economic and Security Review Commission (pdf). The report also gave examples of the “soft power” influence of CIs that repeat Beijing’s lines on sensitive issues. For example, CIs will host speakers who parrot the CCP’s propaganda points about issues like Tibet and follow the CCP’s distortion of history, such as blaming the United States for drawing China into the Korean War by bombing villages.

“I am very worried about them [CIs],” he said. “This is why we need a royal commission because these CIs don’t seem to be what they purport to be and we need to know the extent of the Chinese government’s influence on them.”

As previously reported by The Epoch Times, the council-funded City of Gold Coast Libraries, which operates 13 branches and a mobile library service, revealed it no longer has any plans to engage with Griffith University’s Tourism Confucius Institute (TCI) after an event advertised as a seminar on Chinese culture turned into a pro-CCP geopolitics lecture on why those who criticize Beijing are wrong.

“I can confirm that we have no further sessions booked with the [Tourism Confucius] Institute and no intention to engage them in future,” Acting Manager City Libraries Alison Kemp said in a written statement.

Shelton believes some leftist ideologies the Chinese regime promotes are a threat to freedom, since communism is a totalitarian style of rule that dominates and controls people.

“Communism is an evil ideology … Any totalitarian system that subjugates people and does not allow freedom of speech and freedom of religion is, in my view, something that needs to be resisted and opposed,” he said. “It is very alarming that [CCP Founder] Mao Zedong’s photograph sits above Tiananmen Square. He killed 60 million Chinese people in the bloody Cultural Revolution, and yet he is venerated as some kind of a modern hero in China.”

He said he is “very concerned” after reading an analysis by John Garnaut, a senior China adviser to former Prime Minister Malcolm Turnbull, that the Chinese regime is openly pursuing the Stalinist policies that were adopted by the former Soviet regime.

The communist regime takes control of people by attacking their fundamental values about family, beliefs, and free speech, Shelton said.

“[Communist Revolutionist Karl] Marx said the family is something that needed to be dismantled … the patriarchy, [the] idea of fathers and mothers having control of their children,” he said. “With religion, it takes away the freedom to practice your religion and we have never seen religion under so much pressure.”

Shelton added that with the culture of political correctness in the West, human rights commissions and anti-discrimination tribunals now function “very much like totalitarian regimes under communism” in which they “try and force and compel people to think and speak a certain way or else they cop sanction from the state.”

Shelton said he recognises that China has made many achievements in the past several decades, and believes that there is still much work to be done.

“I think modern China has done many great things … but China needs to continue its reform and make sure there is freedom of religion, freedom of speech, and proper democracy, and that is the way forward for China … not pursuing the Stalinist policies of the past and controlling totalitarianism of its people,” he said. “I think it is a very dangerous road, not just for China but also the world.”

He said that economies benefit from decentralisation. “Less regulation allows business to flourish and to employ more people and to make money. Obviously, there are going to be [some] parameters [for] regulation of any activity in society, but that should be [kept] at a minimum level.

“At the moment, there is too much red tape and green tape, which stops businesses from being able to flourish … to get ahead and to employ more people, and to generate more wealth and prosperity.”

Shelton said that Australia has missed out on the economic boom enjoyed by America because the left-leaning Labor opposition blocked former Australian Prime Minister Malcolm Turnbull from legislating tax breaks for big business.

“Turnbull’s proposed tax cuts to the big end of town would have created more jobs. I think there should be tax cuts right across the board. I am not against tax cuts for the so-called ‘big end of town,'” he said. “The big end of town employs millions of Australians. People rely on corporations to be prosperous, so they can have jobs for themselves and their families … we certainly supported the taxes for those larger corporations. The more you can get the government out of people’s lives, the better our society will be, and the more money that is in their pockets.”

Shelton believes that Australia’s politicians need to make a stand against the political system in mainland China, which is increasing its military might and using “debt diplomacy” to make countries signed up to its One Belt One Road infrastructure project “subservient.”

“It is militarising the South China Sea, it is pushing its weight around, it is trying to make countries subservient to it through debt diplomacy in the South Pacific. This is a real, real worry,” he said.

“We need to stand up to China and not allow it to simply bully its way around our region and bully its way with the expat community here in Australia.

“We want to be friends with China and obviously have no quarrel with the Chinese people, but the system of government [in China] is not one which is welcome and not one, which is conducive of the freedom of its citizens or for the freedom of the world, and for the peace and good order of the world.”