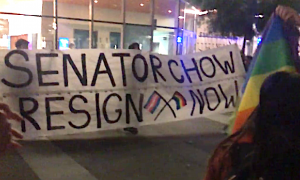 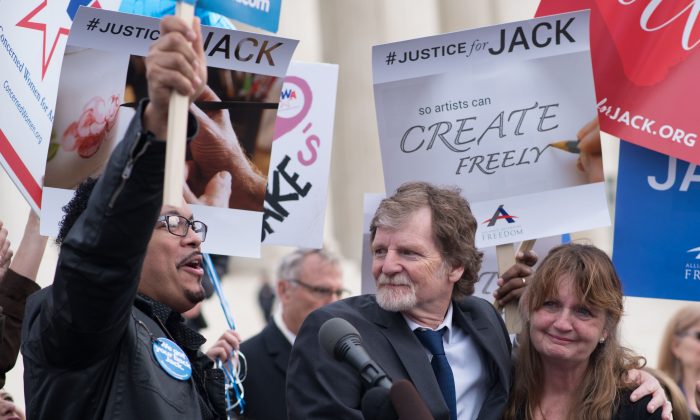 Jack Phillips, owner of Masterpiece Cake in Colorado, stands with supporters outside the US Supreme Court after Masterpiece Cakeshop vs. Colorado Civil Rights Commission were heard on December 5, 2017 in Washington, DC. MARI MATSURI/AFP/Getty Images)
Viewpoints

The Demonization of Religion

Why do they hate us? Eastern Orthodox writer Frederica Mathewes-Green, in a recent essay, considers the question—not about the severe persecution faced by hundreds of millions of Christians worldwide, but rather the particular kind of hatred encountered by Christians in the United States.

She discusses her own youthful experience in the world of hippies, where every kind of religion was explored and experimented with except Christianity, which, in those days, she herself would delight in ridiculing.

She concludes that it was the virtue of purity, espoused by Christians in a hostile climate of sexual liberation, that particularly enraged her and her friends. It was not any particular repressive or discriminatory action of the Christians that outraged them. The very idea of chastity seemed like an affront.

Unrestrained sexual self-expression was not only a personal choice and a right, but also something to be honored and celebrated more or less without regard to the form it took. Failure to accord it such public honor was, in the language of modern legal progressives, an intolerable form of dignitary harm.

In the intervening years, such thinking, and the accompanying intolerance toward believing Christians, has spread to the cultural mainstream, and not only on college campuses. There’s also a concerted effort on the part of LGBT activists to “punish the wicked,” that is, to use the power of the state, its courts, and regulatory agencies to put out of business bakers, florists, photographers, and other small-business proprietors who decline to act against their consciences by celebrating events they consider wrong. And to intimidate the rest.

In an important decision in 2018, the U.S. Supreme Court ruled against the Colorado Civil Rights Commission, which had ordered a cake artist, Jack Phillips of Masterpiece Cakeshop, either to act against his conscience and violate his faith by designing custom wedding cakes that celebrate same-sex marriages, or to stop designing wedding cakes altogether. The Supreme Court ruled that the commission had acted with clear and impermissible bias against Phillips.

Justice Anthony Kennedy cited a statement by one of the commissioners, Diann Rice, that called Phillips’s faith a “despicable piece of rhetoric” and that freedom of religion had been used as justification for the Holocaust or slavery. Rice’s sentiment, said Kennedy in his majority opinion, “is inappropriate for a commission charged with the solemn responsibility of fair and neutral enforcement of Colorado’s antidiscrimination law.”

The commission’s decision against Phillips had been infected by religious animus, the court determined. It violated the religious neutrality required by the Constitution, and must be set aside.

But the Supreme Court’s rebuke was not enough for the commissioners. Even after the court’s ruling, two other members of the seven-person commission publicly supported Rice’s offensive comments, the ones that had persuaded the court of the commission’s bias.

Progressives have long since dropped all pretense of “live and let live” and embraced the use of state power to harass and to burden the consciences of dissenters from the new state orthodoxy. But the openness of the commissioners’ hostility and bias in this case is extraordinary. They were willing to openly defy the Supreme Court in order to prevent Christians from following the dictates of their conscience.

With the new evidence of progressive anti-Christian bigotry emerging from the commissioners’ own statements after the Supreme Court’s decision, and with Phillips’s suit against them, calling for the state to cease its crusade against him and for compensatory and punitive damages, the commission finally decided on March 5 to dismiss its pending case against Phillips, and he dropped his federal lawsuit.

The six-and-a-half-year campaign against Phillips was one episode, but a revealing one, in the secularist war on religion, or rather its attempt to substitute its own faith as the official state orthodoxy that brooks no dissent, with no “live and let live” accommodation. Two aspects of this long campaign to drive religion, and Christianity in particular, from public life are apparent in this case.

One is the demonizing of Christians, who are subject to relentless harassment and vitriol. In this case, the persecution took not only the usual form of hate mail, death threats, and nasty phone calls, but also vilification by public officials constitutionally bound to observe religious neutrality in the exercise of their power.

The other aspect, also common but startling when expressed so openly by public officials, is the dismissal of religion itself, at least in its Christian form. In this case, the hostility goes beyond trivializing religion as a personal, private preference. (Such a partiality, in that view, is of no more legal significance than fondness for a particular kind of music and dislike for another.)

Now we see religion itself demonized, denounced as an excuse, a mere “rhetorical” cover for horrors like slavery, the Holocaust, or refusal to use one’s art to celebrate a gay wedding.

The constitutional right to religious freedom, enshrined in the First Amendment, is dismissed as “code for discrimination” and subordinated—as by the Colorado Civil Rights Commission as well as by former President Barack Obama’s chair of the U.S. Commission on Civil Rights and many other officials charged with enforcing civil rights—to other kinds of anti-discrimination law, especially in the area of “sexual orientation and gender identity.”

They see the civil right to freedom from religious discrimination as itself a target for attack. Their view is the opposite of what Kennedy called a “solemn responsibility of fair and neutral enforcement of Colorado’s antidiscrimination law.”

Such officials banish religion from their concerns because they do not take it as seriously involving claims to truth and obligations to follow one’s conscience. They’re no less contemptuous than the late-adolescent hippies Mathewes-Green recalls from her youth, and are even more powerful and relentless in their hostility toward Christians.