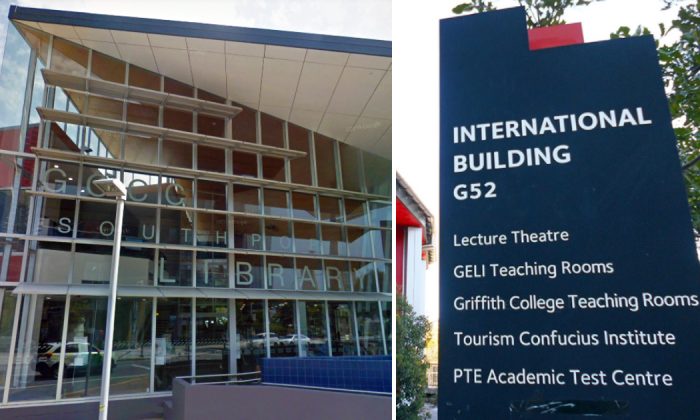 After Controversial Event, Gold Coast Library Has No Plans to Engage with Confucius Institute in Future

The council-funded City of Gold Coast Libraries, which operates 13 branches and a mobile library service, has no plans to engage in future with the Tourism Confucius Institute (TCI) based at Griffith University.

“I can confirm that we have no further sessions booked with the [Tourism Confucius] Institute and no intention to engage them in future,” Acting Manager City Libraries Alison Kemp said in a written statement.

The decision came just weeks after an earlier Epoch Times report revealed that a free “reading community activity” at Southport Library that was advertised as a seminar about Chinese culture, seemed to focus much more on how China is rising in the world and why those who criticize Beijing are wrong.

Emeritus professor Colin Mackerras, a Sinologist and honorary director of TCI, gave an 80-minute presentation on Nov. 30 of which only 15 minutes were devoted to Chinese language and culture. Mackerras spent much of the remaining time speaking about geopolitics.

He talked about the rise of China and political affairs surrounding China, which included his views on what he called U.S. Vice President Mike Pence’s “extremely hostile” speech last year about China as well as his criticism of then-Australian Prime Minister Malcolm Turnbull’s strong words on China’s attempt to influence Australian politics. He also touched on which political party he thought was going to win Australia’s next federal election and how they have been “more positive” towards China.

“China’s rise is important to the world and should be welcome to Australia,” he told the audience, as a security guard stood next to the meeting room door.

Mackerras’ remarks appeared to be at odds with a council committee recommendation, which was formally resolved back in 2009 and 2010, stating political groups should be excluded from using meeting rooms at city public libraries.

Kemp confirmed library spaces are supposed to stay politically neutral, a condition of use TCI may have breached with Mackerras’ talk.

“Libraries are very keen to remain politically neutral and so it is disappointing to hear that the presenter had gone off topic,” she said.

Confucius Institutes (CIs) are advertised by the Chinese Communist Party’s (CCP) Office of Chinese Language Council International, also known as HanBan, as educational organizations to promote Chinese culture and language. However, western intelligence agencies have warned that the institutes are used as part of the Chinese regime’s apparatus to gain influence abroad.

CIs are funded by the CCP through HanBan and documented to be involved in organizing protests against topics the CCP considers to be a threat to the stability of its rule, according to a staff report by the U.S.-China Economic and Security Review Commission (pdf). The report also gave examples of the “soft power” influence of CIs that repeat Beijing’s lines on sensitive issues. For example, CIs will host speakers who parrot the CCP’s propaganda points about issues like Tibet and follow the CCP’s distortion of history such as blaming the United States for drawing China into the Korean War by bombing villages.

TCI has delivered a number of activities in previous years on the Gold Coast according to Kemp.

For example, TCI and the Griffith Institute of Tourism (GIFT) hosted the First East-West Dialogue on Tourism and the Chinese Dream in November 2014, ahead of the G20 Leaders Summit in Brisbane.

The high-level, bilateral discussions attracted “more than 100 representatives of Australian and Chinese government, education and research institutions, and the tourism industry,” said minutes from a council Economic Development and Tourism Committee Meeting on March 20, 2014.

The mayor openly admitted to taking up Chinese language lessons at TCI, hoping he could record a video of his mayor’s message in Chinese.

“I’m currently undertaking Chinese language lessons with Mr. Frank Fang from the Griffith University Confucius Institute,” Tate said in council meeting minutes dated Nov. 13, 2018. “We will be able to do a similar message in Chinese. It will then be able to put up on Youtube and WeChat, and be distributed to Destination Gold Coast and Study Gold Coast.”

The Epoch Times contacted the mayor’s office to confirm whether Tate paid the tuition fee of A$350 (US$249.50) per class from his own money or through taxpayer funds but there was no response at the time of publication.

Mackerras has also been highly critical of the Foreign Influence Transparency Scheme, which Turnbull championed and passed in parliament last year. Mirroring similar laws in the United States, the scheme broadens the definition of espionage and requires people working for foreign countries to register as foreign agents or face criminal prosecution if found to be meddling in national affairs.

Turnbull said in December 2017 the new laws were necessary to fight the “rapidly escalating” threat of foreign interference and the “disturbing reports” that the CCP had interfered with the nation’s media coverage, universities, and the decisions of Australia’s elected representatives.

According to the Attorney-General’s Department which is responsible for enforcing the new laws, CIs in Australia have been directly contacted by the government notifying them of the new legislation.

The deadline to register as a foreign agent was originally Dec. 10 and a grace period was offered until March 10, 2019. However, a quick inspection of the publicly available register shows none of the 12 CIs at Australian universities have registered, including the TCI at Griffith.

The university hosting TCI defended the decision not to register, saying Griffith had already obtained legal advice on the institute’s behalf.

“Griffith University has sought legal advice to confirm that the TCI is not registrable under the Foreign Influence Transparency Scheme. The university understands this is consistent with other universities in Australia,” Griffith Vice President Global Professor Sarah Todd said in a written statement. “Griffith University will comply with all elements of the Foreign Influence Transparency Scheme Act 2018.”

The university also claimed TCI had never received any correspondence from the Australian Attorney General’s Department about the scheme.

However, the Attorney-General’s Department said this is not the case.

“In December 2018, the Attorney-General’s Department wrote to over 700 stakeholders to alert them to the commencement of the Foreign Influence Transparency Scheme,” a department spokesperson said. “This included all Confucius Institutes within Australia, including the institute based at Griffith University.”

The department said TCI and other CIs are responsible for deciding whether they need to register for the scheme, namely “foreign influence activities directed at Australia’s federal political or governmental systems and processes.”

“The department cannot comment on whether or not registration obligations may exist for Griffith University’s Tourism Confucius Institute,” the spokesperson said. “An individual or entity will only be required to register under the scheme if they are undertaking registrable activities on behalf of a foreign principal for a relevant purpose, and no exemptions apply.”

If an organization or individual is found to conduct an activity on behalf of a foreign entity to exert political influence without registration, they could face a maximum penalty of imprisonment for five years, the spokesperson added.

No Difference Between Culture, Politics in China

Emeritus Professor John Fitzgerald from the Swinburne University of Technology’s Centre for Social Impact described the universities as “disingenuous” for not registering their CIs.

“They are not fools, they know that culture and politics go hand in hand in China and that if they allow anything that offends Beijing to occur on their watch there could be consequences for their student recruitment or research pipelines,” he said in an opinion article published by Fairfax Media. “In declining to list CIs under the foreign influence transparency scheme, Australia’s university leaders are then telling us something else—that political censorship of academic activities is something they do willingly on their own account.”

Fitzgerald believes universities have already registered their respective American studies centers that receive funding from Washington since they engage in political discussion.

“If CIs have not been registered, despite being substantially funded from Beijing, it may be because they are thought to confine their activities to ‘culture and language,’ no politics,” he said. “There is no boundary between politics and what passes for culture in contemporary China. The Cultural Revolution … was not called a ‘cultural’ revolution for nothing. The Cultural Revolution may be over but the politics of controlling what can be said in the media and taught in universities has returned with a vengeance.”

CCP Lurks Behind the Scenes

“The Chinese government, which means the CCP, funds CIs, appoints its directors, sets the curriculum, and closely monitors their adherence to official guidelines,” he said in an email. “They have no independence from the Chinese government. By any reasonable criteria they should be registered as foreign agents. In the United States, this is understood. In Australia, many university executives are still mesmerised by the money.”

Human Rights Watch Australia Director Elaine Pearson said the CCP has been very open about describing the CIs as a propaganda outlet.

Pearson said there was one case where Victoria University in Melbourne cancelled a screening of the award-winning documentary In the Name of Confucius after the university’s own CI complained. She believes Australian universities should consider shutting them down.

“In the United States several universities have closed or announced the closure of CIs, in part, because of concerns about academic freedom,” she said. “The 13 Australian universities with CIs should seriously consider following suit.”