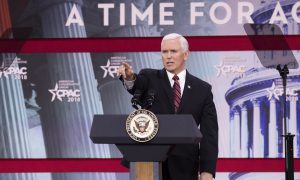 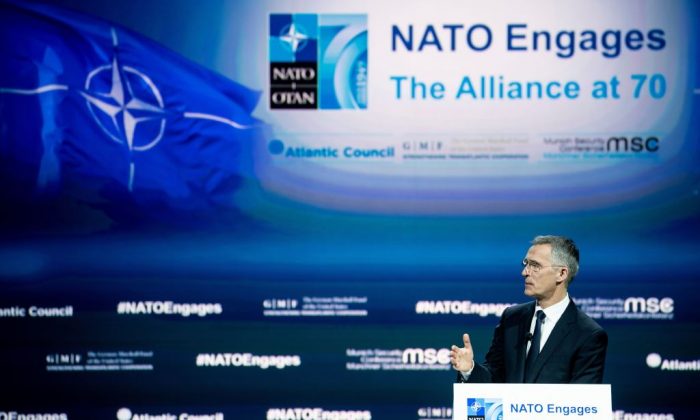 At NATO Meeting, Members Consider How to Counter China Threat

Chinese investment in Europe and the potential for security threats to the region are under scrutiny following a recent meeting to mark the 70th anniversary of the North Atlantic Treaty Organization (NATO), held in Washington.

At the meeting, U.S. Vice President Mike Pence said that the rise of China is the “greatest challenge NATO will face in the coming decade.” He added that this means the United States will need to devote more attention and resources to address the challenge.

He also called on European allies to do their part in being vigilant on China.

Pence made the remarks during the two-day NATO Engages event in Washington, when member nations’ foreign ministers convened to commemorate the organization’s 70th anniversary.

“One Belt, One Road” (OBOR, also known as Belt and Road) is an investment initiative announced by Beijing in 2013 that aims to build up trade routes in Asia, Europe, and Africa through Chinese-financed infrastructure projects.

The U.S. administration has criticized the initiative for putting developing countries into a “debt trap.” In Sri Lanka and the Maldives, for example, local governments could not pay off Chinese loans, leading them to hand off control of key infrastructure to China. Meanwhile, U.S. officials and experts have expressed concern that OBOR projects could be used to strengthen China’s military influence, or to spread technologies capable of spying on Western interests.

Recently, Italy joined OBOR, signing a number of investment deals with China, despite concerns from European and U.S. officials, as well as lawmakers within Italy’s ruling coalition.

Pence’s concerns about China was echoed in a speech on April 4 by German Foreign Minister Heiko Maas, who said, “China is a challenge on almost every topic, and we must gain the better understanding what that implies for NATO.”

Pence’s comments about Chinese 5G technology are a veiled reference to Chinese tech giant Huawei and its close ties to Beijing.

The next-generation wireless mobile communications technology is said to have the power to revolutionize many industries due to the increased network speed. Under 5G, it would only take 3.6 seconds to download a two-hour movie, compared to about six minutes on a 4G network and 26 hours with 3G, according to the Consumer Technology Association, a trade association headquartered in Virginia.

U.S. Sen. Chris Murphy (D-Conn.), in a speech given at the NATO event on April 3, also raised concerns about Huawei. “The idea that a company that is so directly connected and affiliated with the Chinese government could switch on and off our data is something that should cause all of us to lose sleep,” he said.

Meanwhile, the NATO Cooperative Cyber Defence Centre of Excellence (CCDCOE), an international military organization based in Estonia with the mission to enhance defense cooperation and information sharing among NATO members, recently issued a security threat report on Huawei.

“The fear remains that adopting 5G technology from Huawei would introduce a reliance on equipment that can be controlled by the Chinese intelligence services and the military in both peacetime and crisis,” the report warned, adding that Chinese companies are required by law to cooperate with Beijing in support of Chinese national interests.

The report pointed out that any security risks posed by using Huawei products in the critical infrastructure of NATO member states could carry over to the NATO alliance as a whole, since the latter may use a host nation’s civilian infrastructure.

NATO Secretary General Jens Stoltenberg, days before he became the first head of NATO to address a joint meeting of U.S. Congress on April 3, affirmed that the carry-over risk is an important issue in an interview with German weekly magazine Der Spiegel.

“Some NATO member states, including the U.S., are very concerned about Huawei setting up the networks of NATO members, and have expressed their views accordingly within NATO. We take these concerns very seriously,” he said.

A new initiative in the Black Sea region was also announced by U.S. Ambassador to NATO Kay Bailey Hutchison during her news briefings on April 1 and April 2.

“We must make sure that all of the NATO countries that live in the Black Sea and around the Black Sea are also under our security umbrella,” Hutchison said. She explained that the initiative will likely include NATO nations’ air surveillance and ships going into the Black Sea to protect Ukraine’s interests.

Hutchison added that NATO is also assessing China’s presence in the region, especially as Chinese assets have been buying up rights to seaports around the world.

While this initiative is more intended to address “Russian meddling,” according to Hutchison, U.S. officials have previously warned of Chinese activities in the region.

He added: “The 16+1 and Belt/Road initiatives aim to create alternatives to Western influence. Through its money, China offers countries a kind of mortgage on their future.”

Beijing rolled out the 16+1 platform in 2012 to increase economic investments in 11 European member states and five Balkan nations.

In a December 2018 report, the Foreign Policy Research Institute, a think tank based in Philadelphia, warned that Beijing’s ultimate goal in the Black Sea region was to put countries in a “pro-Beijing axis”—a political agenda that was about more than just building roads and bridges.

Among the key findings in the report was that Beijing has hosted more than 200 conferences, summits, and other official gatherings since 2012 for participants from countries in Central and Eastern Europe under the 16+1 platform, to “identify and groom pro-Chinese voices within the political, business, and journalist community.”

For example, in Romania, which is a NATO member, China’s state-run China General Nuclear Power Group has been in talks to build two reactors at the Cernavoda Nuclear Power Plant. Beijing also is negotiating to build a trade corridor linking China to the Romanian Port of Constanta.