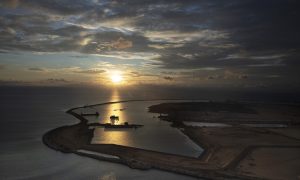 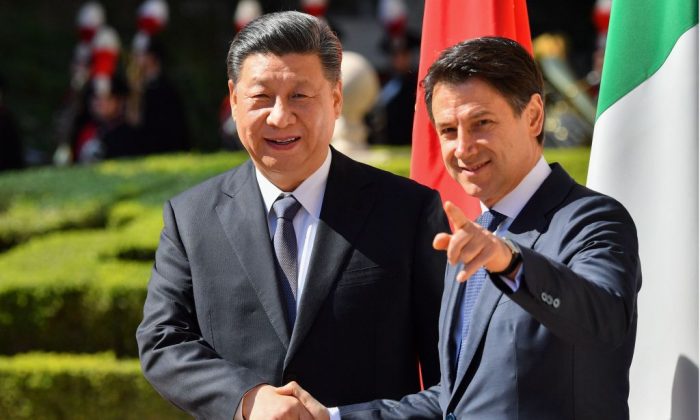 Italy Joins China’s ‘One Belt, One Road’ Initiative Amid Concerns

Italy signed on to China’s controversial “One Belt, One Road” infrastructure plan on March 23, despite concern within the country’s government, as well as those from the United States and the European Union.

The two countries sealed the deal through a memorandum of understanding signed at a ceremony attended by visiting Chinese leader Xi Jinping and Italian Prime Minister Giuseppe Conte.

Italy is the first Group of Seven industrialized country to join the initiative, and only the second major Western European state after Portugal.

“One Belt, One Road” (OBOR, also known as “Belt and Road”) is an investment initiative announced by Beijing in 2013, which plans to build trade routes in Asia, Europe, and Africa through Chinese-financed infrastructure projects.

Critics have said the initiative saddles developing countries with large debt burdens that they can’t pay off, while Washington worries that the plan is designed to strengthen China’s military influence, and could be used to spread technologies capable of spying on Western interests.

Around 30 other accords were also signed during the ceremony. The total value of these deals is initially placed at 2.5 billion euros ($2.5 million), with the potential to reach 20 billion euros ($22.6 billion), according to Italian Deputy Prime Minister Luigi Di Maio, who also leads the populist Five Star Movement, the larger party in Italy’s ruling coalition.

Many of these deals involved Italian firms and their Chinese counterparts. For example, Italian state lender Cassa Depositi e Prestiti signed an agreement with China’s state-run Bank of China to let it sell “Panda” bonds—yuan-denominated debt issued by foreign entities to investors in mainland China.

In Genoa, the Chinese will be involved in developing the seaport, according to Italian wire service ANSA, while in Trieste, the CCCC will develop rail links connecting the port to central and eastern Europe.

Despite the fanfare accompanying the signing ceremonies, there was clear dissent within Italy’s ruling coalition over the country joining OBOR.

Matteo Salvini, Italian Deputy Prime Minister and Minister of Interior, who heads Italy’s right-wing party League, was notably absent from both the state dinner with Xi at the Quirinal Palace on March 22, and the signing ceremony a day later.

Salvini has previously said that Italy would be “no-one’s colony,” AFP reported. And recently, while speaking at a local economic conference, Salvini openly pointed out that free market doesn’t exist in China, according to Italian news site News Mondo.

“We want to be cautious when it comes to national security, our data and, our energy, if we bring our entrepreneurs to China,” Salvini said.

Guglielmo Picchi, Italy’s under-secretary for foreign affairs, also voiced concerns about OBOR on Twitter on March 9, calling for deeper scrutiny of the deals.

German daily newspaper Der Tagesspiegel, in an editorial published following the signing ceremony, said that all of those accords “do not really correspond to the ‘Italy-first’ policy pursued by the [Italian] government.”

Lucrezia Poggetti, a researcher with the Berlin-based Mercator Institute for China Studies, doubted that any government would receive economic support from Beijing simply because the Chinese government was pleased, in a reference to how Xi enjoyed an “imperial reception” in Italy, in an interview with Der Tagesspiegel.

Italy is also breaking with its historic partners, such as France and Germany, who are skeptical of OBOR, according to Poggetti.

On March 12, the European Commission, the executive arm of the European Union, called Beijing a “systematic rival” in a report on EU-China relations. The report pointed out that EU companies must overcome “onerous requirements” as a prerequisite to access the Chinese market, such as transferring key technologies to Chinese counterparts in joint ventures.

In the lead-up to the signing, both French President Emmanuel Macron and German Chancellor Angela Merkel voiced concern that the deal could jeopardize Italy’s national security.

Macron said he recognized there was a divergence of views in the bloc but that letting Chinese companies buy up EU infrastructure such as ports had been a “strategic error.”

“The period of European naivety is over,” Macron told a news conference on March 22.

“The relationship between EU and China must not be first and foremost a trading one, but a geopolitical and strategic relationship,” he said.

EU leaders are currently considering stronger action against the Chinese regime over its unfair trade and investment practices, ahead of the EU-China summit on April 9, after years of granting China almost unfettered access to EU markets.