Exported Tyranny: Telecom Role in the CCP’s One Belt, One Road 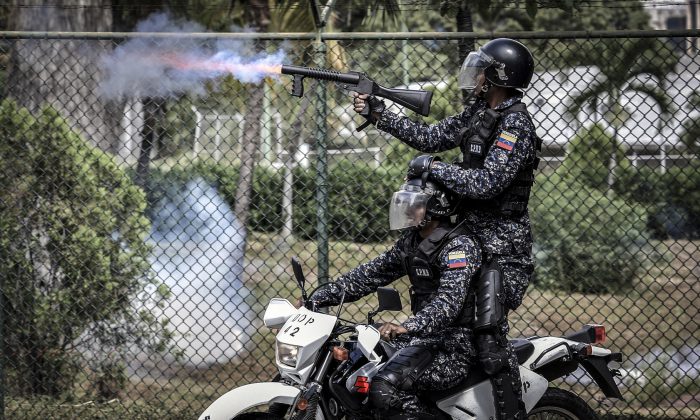 The CCP has built a vast, high-technology system to surveil the Chinese people, and it is exporting this system as part of its One Belt, One Road initiative. Two of the primary players in this push are the companies ZTE and Huawei.

Recently, Sens. Marco Rubio (R-Fla.) and Chris Van Hollen (D-Md.) warned the Trump administration that ZTE was helping China export surveillance tactics to the Nicolás Maduro regime. The Chinese telecommunications giant, which has been penalized for violating trade sanctions on Iran and North Korea, may acquire additional U.S. sanctions as the company’s business with the Venezuelan government faces new scrutiny.

Rubio and Van Hollen sent a letter to the U.S. secretaries of state, the treasury, and commerce, urging an investigation into company’s activities.

“Huawei and ZTE are two sides of the same coin,” Van Hollen said in a statement, adding that Chinese telecom companies represent a “fundamental risk” to U.S. national security.

In the letter, the senators referred to a recent Reuters report stating that the Chinese telecom firm assisted the Venezuelan government in establishing control over its citizens. According to the Reuters report, ZTE helped the Maduro regime to build a database that enables the monitoring and tracking of Venezuelan citizens and, since 2016, to centralize video surveillance.

“We are concerned that ZTE, by building this database for the Venezuelan government, may have violated U.S. export controls and sanctions laws, as well as the terms of the Commerce Department’s June 2018 superseding settlement agreement with ZTE,” the senators said in the letter.

ZTE has a history of breaching U.S. government sanctions. In April, the Commerce Department found ZTE had violated a settlement reached in 2017, and blocked the company from buying crucial components and software from American technology companies. ZTE is highly dependent on U.S. suppliers like Qualcomm, Google, and Corning to manufacture its cellphones and telecom equipment.

The ban nearly brought the company to the brink of bankruptcy, prompting a rare intervention by Chinese leader Xi Jinping.

In June, ZTE reached a settlement with U.S. authorities, agreeing to pay a total of $1.4 billion in fines and to overhaul its board of directors and senior management ranks. In exchange, the United States lifted the ban.

“The Venezuelan government hired ZTE to build a database and develop a mobile payment system for a smart ID card,” the lawmakers wrote.

The project was inspired by China’s national identity card program that tracks the social, political, and economic behavior of its citizens. The program enables the government to monitor everything from a person’s personal finances to medical history and voting activity.

The system in Venezuela was built using components from Dell Technologies in the United States, which alarmed the senators.

“ZTE installed data storage units built by Dell Technologies,” the letter stated. “Though Dell’s transaction appears to have been with ZTE in China, we are concerned that ZTE may have violated U.S. export controls by misidentifying the end-user or purpose of the end use.”

ZTE is China’s second-largest telecom equipment maker. The company is publicly traded, but its largest shareholder is still a Chinese state-controlled enterprise.

A spokesperson for the Commerce Department confirmed that it had received the senators’ letter.

“The Department of Commerce will remain vigilant against any threat to U.S. national security and continues to diligently implement the settlement agreement with ZTE. We have no further comment at this time,” stated the spokesperson in an email.

As part of the settlement deal in June, ZTE has allowed the U.S. Commerce Department to monitor the company’s behavior.

Both Rubio and Van Hollen have been vocal about ZTE’s potential violations and about retaining sanctions on the firm.

“We have not received a response to our letter at this point,” stated a spokesperson for Van Hollen.

Van Hollen co-sponsored a bill introduced in September called the ZTE Enforcement Review and Oversight (ZERO) Act. The legislation requires the Commerce Department to put ZTE out of business if it violates the current agreement with the United States.

On Dec. 1, as part of a U.S. probe, Canada arrested Meng Wanzhou, the chief financial officer of Huawei, another Chinese telecom company.

The United States was pursuing Meng, the daughter of Huawei’s founder, in a criminal probe related to the violation of sanctions against Iran.

“While the Commerce Department focused its attention on ZTE, this news highlights that Huawei is also violating U.S. law,” Van Hollen said in the statement. “We need a comprehensive plan to hold the Chinese and their state-sponsored entities accountable for gross violations of the law and threats to our security.”

A Push Into Panama

China’s top telecom firms are also making inroads in Panama. R. Evan Ellis, a professor of Latin American studies at the U.S. Army War College Strategic Studies Institute, predicts that Huawei and ZTE will be the dominant providers of telecom infrastructure and services in Latin America and the Caribbean, with a “near-monopoly status” eclipsing local providers by 2050.

Such dominance, according to Ellis, would give China “virtually limitless capability to collect business intelligence or appropriate technologies to give an unfair position to PRC-based companies,” he said for a report published by U.S. think tank Center for Strategic and International Studies on Nov. 21.

The two firms’ dominance could also compromise “virtually any military, government, or business leader in the region, to obtain from them valuable political and military intelligence,” he said.

Huawei was even recently awarded a contract for installing a street-level surveillance system with facial recognition cameras linked to a data network based in the city of Colón—allowing the Panama government to mimic China’s mass surveillance system, in which millions of cameras currently monitor citizens throughout the country and have been used to snuff out dissidents. Panama’s system would also be wired to the government offices of defense, migration, fire department, and ambulance service.

Many governments around the world, including in the United States and Australia, have raised concerns about equipment and phones made by Huawei and ZTE. The Pentagon issued an order in May to remove all phones from these two companies sold at stores on U.S. military bases, out of concern that those devices could be used to spy on U.S. forces.

China and Panama signed multiple cooperation deals after Chinese leader Xi Jinping’s recent visit to the Central American country. However, experts are voicing concerns that the closer relationship between the two countries could be damaging to Panama’s interests, as well as those of the United States.

Xi arrived in Panama on Dec. 2 for a 24-hour visit, during which he met with Panamanian President Juan Carlos Varela. The two leaders signed 19 cooperation agreements for trade, infrastructure, banking, education, and tourism, according to Reuters. One of the agreements calls for China to provide non-reimbursable aid to Panama for carrying out the different projects; the amount wasn’t disclosed.

Additionally, Varela expressed support for Panama’s continued participation in projects under Beijing’s “One Belt, One Road” (OBOR, also known as Belt and Road) initiative, according to China’s state-run media Global Times. Beijing first announced OBOR, a bid to build up geopolitical influence through trade networks, in 2013. The initiative includes billions of dollars’ worth of investments in countries throughout Asia, Europe, Africa, and Latin America.

Panamanian economist Eddie Tapiero raised concerns about the relationship with China, while speaking at a news program run by Panamanian broadcaster TVN.

“It calls us to be more demanding in areas of transparency, corruption, and the law. If that doesn’t happen, the initiative [with Chinese investment] would not work out” because the money would be squandered, Tapiero said, and efforts “to boost Panama would not happen.”

While Tapiero didn’t elaborate on how corruption might take place, China’s OBOR has been known to foster corruption in countries with weak institutions, while benefiting the Chinese regime and harming local interests. One example involves Malaysia, whose newly elected Prime Minister Mahathir Mohamad canceled some $23 billion worth of OBOR infrastructure projects in August after his predecessor was charged with corruption and money laundering in relation to funding for the projects.

Similar transparency concerns were voiced by Miguel Antonio Bernal, a law professor and a candidate running in Panama’s 2019 presidential election, who said, “[China has] a colonization plan and we don’t have the professional capacity to resist it. We are like an ant wanting to be friends with an elephant,” according to a Dec. 2 article by U.S.-based Spanish-language cable news channel Univision.

Chinese companies have invested heavily in Panama in recent years. For example, in May 2017, China’s Landbridge Group, under the OBOR initiative, was awarded the contract to expand Panama’s largest port, the Colón Container Port, for about $1 billion. The firm began construction in June 2017, according to China’s state-run media.

In July 2018, China’s state-run China Communication Construction and its subsidiary China Harbor Engineering won the bid to construct a new bridge over the Panama Canal, with a $1.42 billion contract.

In an article published Sept. 21, Global Americans, a nonprofit platform that provides news and analysis on Latin America, pointed out several cases of Chinese companies being awarded public contracts under dubious circumstances.

China Harbor Engineering, for example, was awarded the bridge contract following the “unexplained withdrawal of one of the competitors from the bidding process.” Additionally, the company’s final design closely resembled one submitted by the competitor that lost the bid.

The U.S. congressional committee China Economic and Security Review Commission (USCC), issued a report in October on China’s engagement in Latin America and the Caribbean, warning of the challenges posed by China’s investment in the region. The report concludes that Chinese investment would reduce the United States’ strategic influence in the region, diminish U.S. regional security relationships, and undermine U.S. promotion of international norms such as democracy and fair labor practices.

China is currently constructing port facilities at both ends of the Panama Canal: Port Balboa and the Amado Cruise Terminal near the entrance connecting to the Pacific Ocean; and Panama Colón Container Port at the Atlantic Ocean entrance.

The USCC report questions the economic feasibility of some of the Chinese projects, including the $167 million Amado Cruise Terminal, which is “not along any major cruise ship routes.”