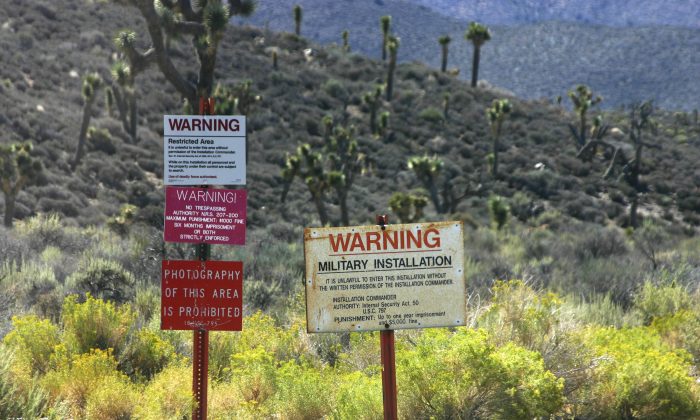 The warning signs on the road leading into Groom Lake, aka Area 51. (LPETTET/iStock)
Entertainment News

Assault on Area 51 Event Will be Livestreamed by ‘Area15’

As the movement to storm the secretive Area 51 military facility gains steam, a company called Area15 has announced plans to livestream the raid.

The company, which operates a shopping mall in Nevada, said in a statement on social media, “‘We’re going to live stream the ‘event’ here at #AREA15 to watch what goes down. And, of course, costumes and tin foil hats are required.”

No announcement has been made as to where Area15’s livestream of the Area 51 raid will be available to view online.  A channel named Lefty has launched a livestream on YouTube saying, “if I get to 100,000 subscribers, I will go to area 51 on September 20th 2019.”

At the time of reporting, more than 1.2 million people had signed up to the “Storm Area 51” event as interest mounts in what appears to be a satirical ploy to raid the secretive military facility and “see them aliens.”

Another 1 million people have expressed interest in this event.

Actor Danny Trejo has jumped on the “Storm Area 51” bandwagon by posting an image of himself holding a glowing machete on social media with the caption, “After leaving Area 51.”

Trejo, whose film credits include “Grindhouse,” “Machete,” and “Machete Kills,” took to Facebook and Twitter on Monday to share a screenshot of himself from his upcoming movie “Machete Kills in Space,” with a caption saying that this would be him after leaving Area 51.

People weighed in with comments, including musings whether the “Storm Area 51” event might be a promo for Trejo’s new film, directed by Robert Rodriguez.

“Y’all, what if this whole thing was really an opening event for the movie???”

Another person commented, “THIS HAS GONE TOO FAR!!! Now please keep going.”

“One of two things will happen,” someone else commented, adding: “1) The biggest massacre of our age, 2) Nothing, because they’ll find Area 51 totally empty and abandoned. No secret elevators, no alien evidence, no nothing.”

Area 51, the mysterious United States military base nestled between mountain ranges north of Las Vegas, Nevada, has for decades been a lightning rod for UFO buffs and believers in government-led alien coverups. While in 2013, the U.S. government admitted to the existence of Area 51 in a declassified CIA history of its U-2 spy plane program, no acknowledgment was made of interstellar spaceships or little green men.

Access to the facility remains highly restricted. According to inverse.com, the closest place interested parties can get to Area 51 across land is by way of Tikaboo Peak, around 26 miles away. But now, the hundreds of thousands of “Storm Area 51, They Can’t Stop All of Us” participants appear to want to get closer.

The assembly point for the Area 51 raiders is the Area 51 Alien Center, a restaurant and souvenir shop located near the intersection of US-95 and Nevada State Route 373 in Amargosa Valley. It’s got 3.5 stars out of 5 on Trip Advisor and such glowing reviews on Google as “Such a cute stop in the middle of nowhere!” and “the restrooms are clean & neat” and “had one of those put your head on/in alien figure for photo things.”