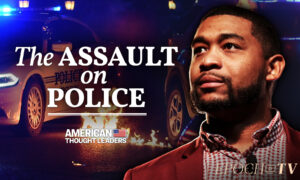 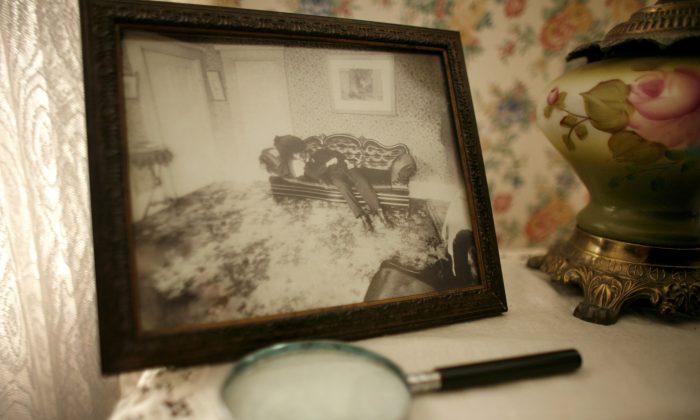 A crime scene photograph of Lizzie Borden's father Andrew Borden appears in the room of the former family home where he was killed in the infamous 1892 double murder, in Fall River, Mass., Wednesday, Aug. 20, 2008. (AP Photo/Steven Senne)
US

A Maine painter says several photographs she took in the infamous Lizzie Borden house in Fall River, Massachusetts turned out to have the outline of a person in them.

The pictures, which Joanne Parent shared on Facebook, show a mirror in the corner on a table, along with several framed photographs.

But on closer inspection, the mirror appears to show something.

“You can clearly see the outline of something, like the form of a woman wearing a hood,” Parent told the PenBay Pilot. “I showed them to my sister and her husband. I was like ‘Oh My God,’ look at this.”

Parent had posted the photo to Facebook, but has since made her profile private so it’s not longer publicly available. However, the photo can still be seen on the PenBay Pilot.

Parent took the pictures by reaching around the door and snapping them, unwilling to go into the actual room where Borden allegedly murdered her father Andrew and her stepmother Abby in 1892.

Parent also says the black bar in the mirror seemed to appear later after the photos were taken.

“It’s an old, old mirror. People think they see stuff in it all of the time,” said Lee-Ann Wilber, who co-owns the bed and breakfast at the home.

“Depending on how you’re standing, you won’t see any anomalies in the mirror unless you take the picture from an angle. We’ve had plenty of pictures that were taken several years ago that can’t be explained, however, by a gentlemen by the name of Glenn Teza, a psychic and spiritual healing teacher from New Jersey. His photos show a mist figure and were taken with Instant Poloroid film and there is absolutely no way to mess with that film.”