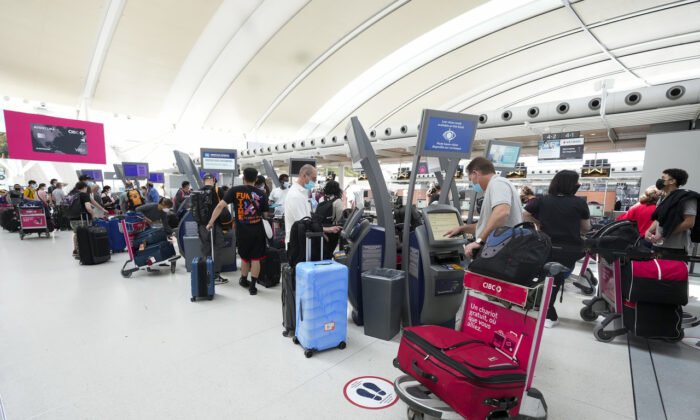 People wait in line to check in at Pearson International Airport in Toronto on May 12, 2022. (Nathan Denette/The Canadian Press)
Canada

Fully vaccinated travellers entering Canada who properly used the mandatory ArriveCan app were mistakenly told to quarantine this week due to a technical glitch that potentially affected thousands of users, the Canada Border Services Agency (CBSA) has confirmed.

CBSA told The Epoch Times that it became aware earlier this week of a “notification glitch” with the ArriveCan app.

“Some travellers, despite having submitted all the required information and their proof of vaccination using the ArriveCAN app, have received automated quarantine notifications when they should not,” CBSA spokesperson Rebecca Purdy said in a July 21 email.

Purdy says the glitch affected less than 3 percent of users and was linked to Apple devices.

Purdy declined to respond to a follow-up question asking how many total users were affected and if they were contacted by the government.

Sandra Boudreau, also a CBSA spokesperson, told The Epoch Times that in the week of July 11 to 17, nearly 1.4 million travellers successfully submitted their travel plans and personal health information through ArriveCan.

Purdy says the CBSA glitch was fixed on the evening of July 20, which means ArriveCan was potentially not functioning properly for three days, from at least July 18 to July 20.

Purdy says that affected users should still answer any phone calls from the government and follow recommendations from the official.

She said users who believe they shouldn’t have to follow these requirements can fill out a form on the government’s ArriveCan website.

The Epoch Times reported earlier this week that a librarian from a small Vermont border town spends much of her time helping seniors fill out ArriveCan after they were refused entry at the Canadian border.

“This situation is out of hand for me, as all I do all day is help people turned around by CBSA,” said Sharon Ellingwood White, who expressed concerns about the elderly’s disadvantage in using the technology.

CBSA responded that it’s “working hard … all the time” to make the service easier to use.

“We want to thank and recognize all those who have been helping, like the librarian from Vermont,” Boudreau said.

CBSA claims a high completion rate for use of the service. Boudreau says for the week ending July 17, over 99 percent successfully filled the form in air and marine mode and 90 percent in land mode.

But testimonies from Ellingwood White and the union representing border guards have painted a different picture.

“To complete [the app], essentially our officers now largely work as IT consultants—you have land borders that have essentially become parking lots for us to help people complete the app,” said Mark Weber, national president of the Customs and Immigration Union, while testifying before a House of Commons committee on June 15.

Before help is provided, Weber put the completion rate at around 60 percent for land mode in certain areas like Quebec’s Eastern Townships that connect to Vermont.

ArriveCan is managed by CBSA and the Public Health Agency of Canada (PHAC). PHAC quarantine officers are authorized to hand out $5,000 fines, plus a surcharge, when a traveller does not comply with the ArriveCan requirement.