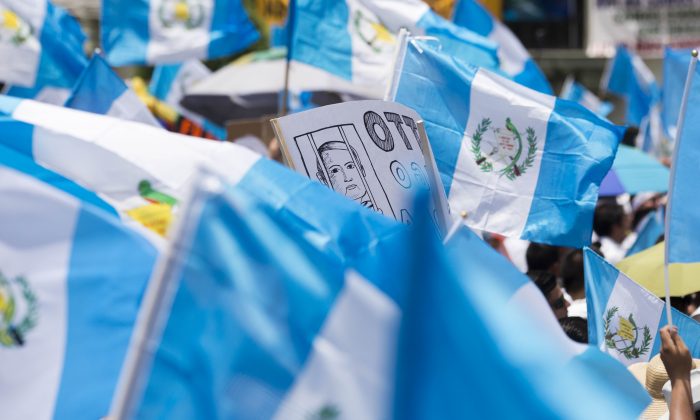 A poster with a caricature of Guatemalan President Otto Perez Molina, drawn behind bars, juts out from a sea of national flags, during a concentration of thousands calling for his resignation, gathered in front of the National Palace, in Guatemala City, on Aug. 27, 2015. (Moises Castillo/AP)
Opinion

Popular discontent has been simmering away in parts of Central America for some time, and now it’s finally boiling over. Lurid public corruption scandals that shook Guatemala and Honduras this summer have provoked massive protests. Days before the first round of Guatemala’s presidential elections was held on Sept. 6, President Otto Pérez Molina resigned from office after a judge issued a detention order against him.

But it’s not just Pérez Molina; Guatemala’s entire political establishment has taken a huge hit. With first-round results tallied, outsider candidate Jimmy Morales was in the lead—though he fell far short of the 50 percent needed to avoid a second round, which will now take place in late October.

Central America remains a key drug trafficking hub with gang violence still rife, and people’s patience with the corruption that accompanies the disorder is at an all-time low.

This has all been a long time coming. Central America remains a key drug trafficking hub with gang violence still rife, and people’s patience with the corruption that accompanies the disorder is at an all-time low. Commentators have started to draw parallels with the uprisings that swept across the Middle East and North Africa in 2011, suggesting this could be the start of a “Central American spring.”

Now that a Guatemalan president has actually been forced out of office, there are indeed signs that the country has reached a tipping point.

Impunity has been a major problem in Guatemala for many years. Indeed, in 2007, a dedicated U.N.-backed body—the Commission Against Impunity in Guatemala (CICIG)—was established to tackle it.

The CICIG’s mandate has been extended repeatedly, and the commission played a big role in exposing an alleged corruption network linked to the national customs agency.

Along with Pérez Molina, Vice-President Roxana Baldetti has resigned and been imprisoned. The ruling Patriotic Party (PP) presidential candidate, Alejandro Sinaboldi, has stepped down as well. A total of eight ministers have been forced out, and overall, the scandal has seen more than 30 people imprisoned.

As a result, the scandal dominated the campaign for the first round of presidential elections. Sinaboldi’s resignation torpedoed the PP’s hopes of winning. At first, this strengthened the frontrunner, the Renewed Democratic Freedom Party’s Manuel Baldizón—but then, in a separate case, the CICIG accused his vice-presidential nominee, Edgar Barquín Durán, of money laundering.

With the political elite thoroughly discredited, a strong anti-establishment force emerged in the form of the apparently victorious Morales, an actor and comedian who rose rapidly up the opinion polls.

Molina’s departure also fueled to a last minute boost for Sandra Torres, a former first lady running for the left of center National Union of Hope (UNE). While the CICIG had implicated figures close to her, she has challenged strongly for second place, capturing votes from those who no longer support Baldizón, but are rattled by Morales’s anti-system stance.

The upheaval is not confined to Guatemala. Honduras’s president, Juan Orlando Hernández, is set to serve out his term until 2017, but has also faced mass protests and calls to resign.

These were provoked by allegations that his National Party diverted substantial funds from the Honduran Social Security Institute (IHSS). Hernández himself is accused of having accepted some of this to finance his election campaign in 2013.

Hernández now faces calls to set up a Commission Against Impunity in Honduras (CICIH), modeled on Guatemala’s CICIG. Hernández initially opposed any such commission, arguing that the scandal in Guatemala was evidence that the CICIG had not been successful. Instead, he merely proposed a national dialogue.

But the recent protests have forced Hernández to change tack, and he now recognizes the need for international support. He now seems more willing to consider a commission, which could only be set up after a referendum and potentially constitutional reform.

Still, other senior figures in the National Party remain hostile. And even if they were persuaded, a two-thirds congressional majority would be needed to amend the constitution. That process would take several years, and could easily be derailed.

The uprisings in both countries have been met with high expectations, but they will probably disappoint their excitable onlookers.

In Guatemala, Pérez Molina’s resignation will not necessarily lead to fundamental change. Even if Morales wins, Guatemala’s problems are too deeply entrenched for any quick fix. Still, the CICIG’s mandate will probably be strengthened, and there will at last be a meaningful debate about electoral reform—particularly to the murky workings of campaign finance.

In Honduras, Hernández looks likely to ride out the current scandal, thanks to his party’s relatively strong position in congress. Nonetheless, he will be under huge pressure to fix Honduras’s institutions and combat graft, making constitutional reform increasingly likely. This will also reopen debate over the country’s law banning presidents from seeking second terms, which was recently struck down in a controversial Supreme Court decision.

All in all, the parallels being drawn with the Arab Spring are rather lazy.

All in all, the parallels being drawn with the Arab Spring are rather lazy. The protests have yet to spread to the other Central American countries, which all have quite different political climates. Unlike the Middle Eastern countries most affected by the Arab Spring, Central America is host to democratically elected governments rather than autocracies. And despite Pérez Molina’s spectacular departure, calling this moment a “Central American spring” exaggerates the potential for fundamental change.

Nonetheless, corruption and violence (political and otherwise) are still serious problems in all the countries of Central America, and there’s mounting popular pressure on governments to do something about it, especially in El Salvador and Costa Rica. With Latin America’s commodity-driven boom running out of steam, its people’s patience cannot last forever.

Neil Pyper is a senior lecturer in business/management at Coventry University in the U.K. This article was previously published on TheConversation.com