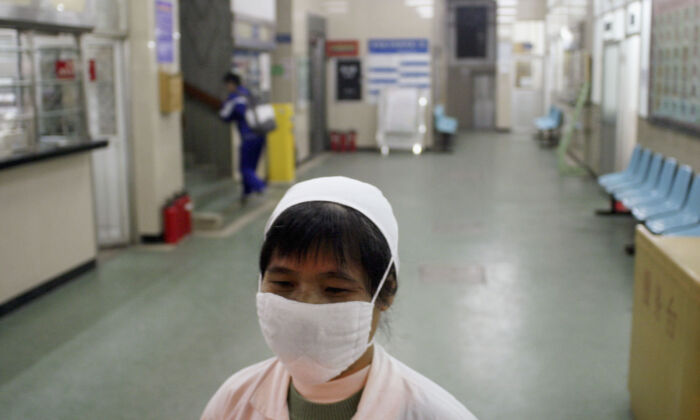 A nurse wearing a face mask, walks in a hallway of a hospital in Guangzhou, China on Jan. 13, 2004. (Getty Images)
By Nicole Hao

Thailand authorities said a visiting Chinese tourist has been diagnosed with a new strain of pneumonia that’s the first confirmed case outside of Wuhan City, China.

Meanwhile, in southern China’s Shenzhen City, a patient has been hospitalized for another mysterious type of severe pneumonia.

Chinese authorities on Jan. 11 publicly released the complete genetic sequence of the coronavirus that causes the respiratory illness, allowing public health professionals to detect whether a patient has the same illness that was first confirmed by Wuhan health authorities on Dec. 31, 2019.

“WHO reiterates that it is essential that investigations continue in China to identify the source of this outbreak and any animal reservoirs or intermediate hosts,” the World Health Organization (WHO) said in a statement Jan. 13, in response to the Thailand case.

Chinese authorities haven’t yet identified the cause of the illness, although they say several patients had visited or worked at a seafood market in Wuhan that also sells wild game.

Hong Kong, Singapore, Taiwan, and South Korea all have identified people with pneumonia-like symptoms who recently traveled to Wuhan and have quarantined them in hospitals.

Thailand’s public health ministry said on Jan. 13 that the patient is a woman from the central Chinese city of Wuhan. After she was found with pneumonia-like symptoms on Jan. 8, Thailand authorities quarantined her at the Bamrasnaradura Infectious Diseases Institute, in Nonthaburi.

The ministry added that the Chinese tourist has recovered from the illness and can fly back to Wuhan.

The Nanshan District People’s Hospital in Shenzhen City reported that a patient has been admitted for severe pneumonia, according to a Jan. 12 statement published by Chinese state-run media.

The hospital statement said the patient is a 41-year-old Indian national and a teacher in Shenzhen. She didn’t travel to other Chinese cities in recent months.

She developed a cough after the new year and had a fever for about two days, but didn’t visit a doctor or report being ill.

On Jan. 11, she went to the Shekou People’s Hospital in Nanshan district. Soon after, the patient experienced severe respiratory failure, and was transferred to the Nanshan District People’s Hospital.

Sean Lin, a U.S.-based expert in microbiology and former virology researcher for the U.S. Army, said it’s highly unusual for a hospital to rule out the Wuhan coronavirus within 24 hours of a patient being admitted.

He said testing for coronaviruses usually takes more than a day. Common viruses only take several hours to test, but it’s unlikely that the hospital would need to make a statement regarding an illness caused by a common virus.

“I believe the conclusion was premature,” he said.

He also found it unusual that while other Asian countries and regions have suspected cases, neither Wuhan or other Chinese cities have reported new suspected cases.

“It’s not like the only traffic out of Wuhan is through flights,” he said, adding that it’s irresponsible of Chinese authorities to not issue alerts, nor provide public information via press conferences or media interviews.

Since the outbreak, Wuhan authorities have heavily censored discussions about the illness. Eight Wuhan residents were detained after sharing information on social media.