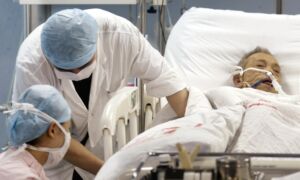 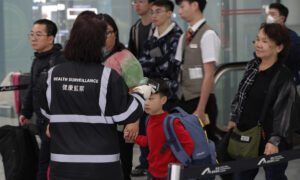 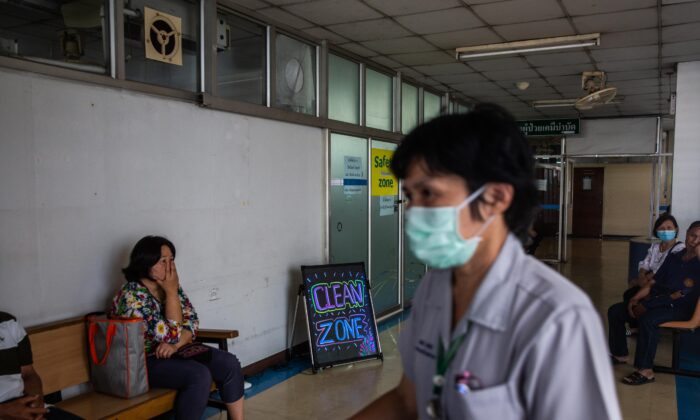 A nurse walks past a "clean zone," a room with purified air for respiratory illness patients, at the Suan Dok Hospital in Chiang Mai, Thailand on April 22, 2019. (Lauren DeCicca/Getty Images)
Asia & Pacific

BANGKOK—A Chinese woman has been quarantined in Thailand with a mystery strain of coronavirus just days ahead of the Lunar New Year, when Chinese tourists flock to Thailand, authorities said on Jan. 13.

Thai authorities are stepping up monitoring at airports ahead of the Lunar New Year holiday when hundreds of thousands of Chinese tourists are expected to visit.

A 61-year-old man has died from pneumonia in the central Chinese city of Wuhan after an outbreak of the yet to be identified virus while seven were in critical condition, Wuhan health authorities said on Saturday.

Preliminary lab tests cited by Chinese state media show that the pneumonia could be from a new type of coronavirus.

Coronaviruses are a large family of viruses that can cause infections ranging from the common cold to SARS. Some of the virus types cause less serious disease, while some like the one that causes MERS, are far more severe.

Of 12 passengers quarantined since Jan. 3, lab results show that a 61-year-old Chinese woman carried a strain of the coronavirus, the Thai Health Ministry said on Monday.

The woman, who was quarantined on Wednesday, had received treatment and was well enough to return home, the ministry said.

“Being able to identify a patient shows that there is efficiency in our monitoring system. We are confident that we can manage the situation,” Public Health Minister Anutin Charnvirakul told reporters.

The Chinese outbreak of pneumonia appeared to be linked to a single seafood market in Wuhan and had not so far spread beyond there, the World Health Organization said on Sunday.

WHO Director-General Tedros Adhanom Ghebreyesus will consult with international experts to assess the public health risks of outbreaks and decide whether an emergency meeting is needed, it said.

WHO officials in Thailand were not immediately available for comment on Monday.

Countries and regions across Asia, such as Hong Kong, Taiwan, South Korea, and Thailand have stepped up screening measures for travelers in order to prevent the disease from spreading.

Some public health experts are concerned that the Chinese regime’s lack of transparency regarding the new virus could lead to a public health crisis akin to the SARS epidemic.