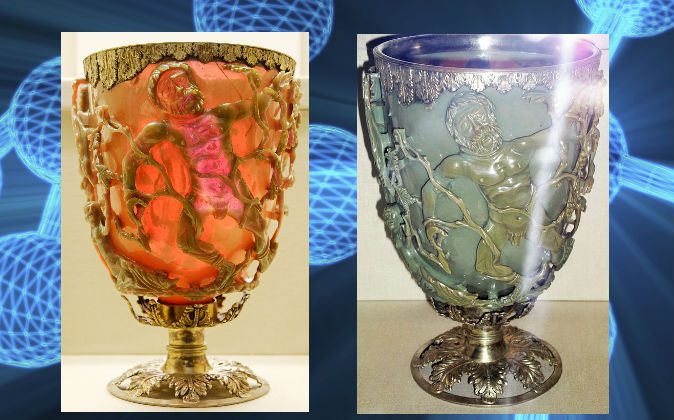 The Lycurgus Cup, as it is known due to its depiction of a scene involving King Lycurgus of Thrace, is a 1,600-year-old jade green Roman chalice that changes colour depending on the direction of the light upon it. It baffled scientists ever since the glass chalice was acquired by the British Museum in the 1950s, as they could not work out why the cup appeared jade green when lit from the front but blood red when lit from behind.

Later research confirmed the effect was caused by interference produced by the interaction of light with metallic nanoparticles. Now the same technology used to produce the unique features of the Lycurgus cup are being used to create holograms made of tiny particles of silver that could double the amount of information that can be stored in digital optical devices, such as sensors, displays and medical imaging devices.

According to a new study published in the Proceedings of the National Academy of Sciences of the United States of America, the interference produced by the interaction of light with nanoparticles allows holograms to go beyond the normal limits of diffraction, or the way in which waves spread or bend when they encounter an opening or obstacle.

When metallic particles have dimensions on the nanoscale, they display iridescent colours. The first known example of this phenomenon is the Lycurgus cup, a 4th century chalice made of glass impregnated with particles of silver and gold, ground down until they were as small as 50 nanometres in diameter, less than one-thousandth the size of a grain of table salt. This produced the optical phenomenon, known as dichroism, which occurs when the colour of the cup changes from green to red according to the position of the light source.

Scientists say the Roman artisans created the dichromic effect in the magnificent Lycurgus chalice by accident, however, others have argued that their work was so precise that it is ridiculous to assert that the outcome was accidental.  In fact, the exact mixture of the previous metals suggests that the Romans had perfected the use of nanoparticles – “an amazing feat,” according to archaeologist Ian Freestone of University College London.

Only in the last 20 years have scientists begun to understand the phenomenon observed in the Lycurgus Cup, but until now, they have not been able to utilise its effects in currently-available technology.

To apply this phenomenon in modern optics, an interdisciplinary team of researchers have created nanoscale metallic nanoparticle arrays that mimic the colour effects of the Lycurgus cup, to form multi-colour holograms. This breakthrough could lead to the shrinkage of standard bulky optical devices.

“This technology will lead to a new range of applications in the area of photonics, as conventional optical components simply cannot achieve this kind of functionality,” said Yunuen Montelongo, a PhD student from the Department of Engineering, who led the research. “The potential of this technology will be realised when they are mass produced and integrated into the next generation of ultra-thin consumer electronics.”

Using a single thin layer of silver, Montelongo and his colleagues patterned colourful holograms containing 16 million nanoparticles per square millimetre. Each nanoparticle, approximately 1000 times smaller than the width of a human hair, scatters light into different colours depending on its particular size and shape. The scattered light from each of the nanoparticles interacts and combines with all of the others to produce an image.

The device can display different images when illuminated with a different colour light, a property not seen before in a device of this type. Furthermore, when multiple light sources are shone simultaneously, a multi-colour image is projected.

“This hologram may find a wide range of applications in the area of displays, optical data storage, and sensors,” said PhD student Calum Williams, a co-author of the paper. “However, scalable approaches are needed to fulfil the potential of this technology.”

Isn’t it ironic that scientists now turn to the works of our so-called ‘primitive’ ancestors for help in developing new technologies?