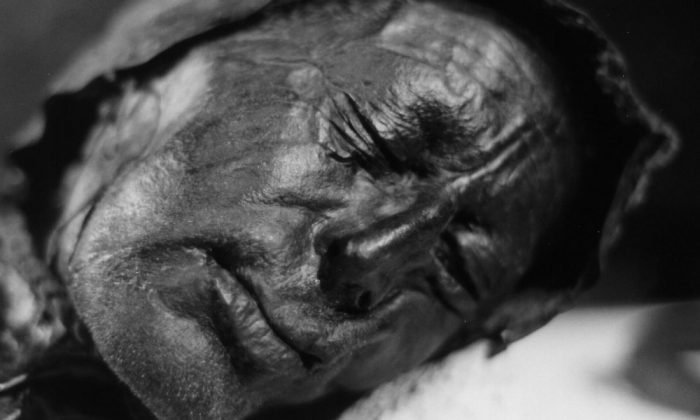 Head of the bog body known as Tollund Man, found in Tollund, Silkebjorg, Denmark, in 1950 and dated to approximately 375-210 B.C. (Sven Rosborn via Wikimedia Commons)
Science

Over the past centuries, the remains of more than 500 men, women, and children have been unearthed during peat cutting activities in northwestern Europe, especially in Ireland, Great Britain, the Netherlands, northern Germany, and Denmark.  Known as “bog bodies,” most date to the Iron Age, between 800 BC and 200 AD, and show a remarkable degree of preservation thanks to the acidic, oxygen-poor conditions of peat bogs, which are made up of accumulated layers of dead moss.

No one knows for sure who these people were and how they ended up in the bogs, but it seems that most bodies are not just the remains of unlucky people who fell in after losing their way as many of them display signs of violent deaths. Now, thanks to new research reported in the National Geographic, new clues are coming to light regarding the centuries-old mystery of their origins.

Around 30 bog bodies are housed in museums in Denmark, where scientists have worked for decades trying to unravel the mystery of who these people were, how they died, and why. Funerary customs of the time and region involved cremation of the bodies, so the fact that some were found intentionally placed in the peat bog, suggest that these were not normal burials and may even indicate sacrifice. For instance, Tollund Man, the name given to a 4th century BC bog body found in Denmark, was found with a noose still around his neck but with no other injuries and it appears he had been carefully placed in the bog – his eyes and mouth had been closed and his body placed in a sleeping position – something that wouldn’t have happened if he were a common criminal.

However, new research conducted by a team of scientists in Denmark has added a few more pieces to the puzzle. Chemical analyses conducted on two Danish bog bodies – Huldremose Woman and Haraldskær Woman – show that they had both lived in far-away lands before their deaths, and both appear to have been high-status members of their society.

Karin Margarita Frei, a research scientist at the National Museum of Denmark, and her team, conducted strontium isotope analysis of the leather cape, woollen scarf and skirt of Huldremose Woman and found that the plant fibres taken from the threads grew on terrains typical of northern Scandinavia, such as Norway or Sweden.  Frei also did an analysis of strontium isotopes in Huldremose Woman’s skin, which revealed that her body contained strontium atoms from locales outside Denmark—showing she had travelled abroad before she ended up in the bog, or may have originally come from that location.

The clothing worn by Huldremose Woman was originally dyed blue and red, a sign of wealth, and a ridge in one of her fingers indicated it once bore a gold ring. “We think she’s a very fine lady with expensive jewellery and expensive clothes and underwear,” said Frei.

The research team followed up this research by carrying out the same tests on Haraldskær Woman, a bog body found in Denmark in 1835. Preliminary results of the strontium analysis mirror the findings for Huldremose Woman—Haraldskær Woman had lived elsewhere before her death. Frei and colleagues are now running analyses on the skin of Tollund Man to see where he had been before his death.

Heather Gill-Frerking, a mummy researcher for the museum-exhibit company American Exhibitions, told National Geographic that the new findings support her theory that bog bodies belonged to geographic outsiders, who may have married into Danish communities. She further suggests that these individuals were found buried in the bog, not as a result of sacrifice or as part of a religious rite, but because they came from communities that may have had different funerary customs.

However, other researchers have said the findings do not conflict with the view that the individuals had been sacrificed. Niels Lynnerup, a forensic anthropologist at the University of Copenhagen believes that they may have been sacrificed because they came from abroad and therefore had a special status.

“You sacrifice something that is meaningful and has a lot of value,” said Frei. “So maybe people who [had] travelled had a lot of value.”

The archaeologists acknowledged that, while the new research provides new insights into the bog bodies, there are still many more questions than answers. As Lotte Hedeager, an expert in Iron Age archaeology at the University of Oslo in Norway, said: “We will never be able to uncover the perception of life and death of those individuals 2,000 years ago. That remains a true secret of the bogs.”