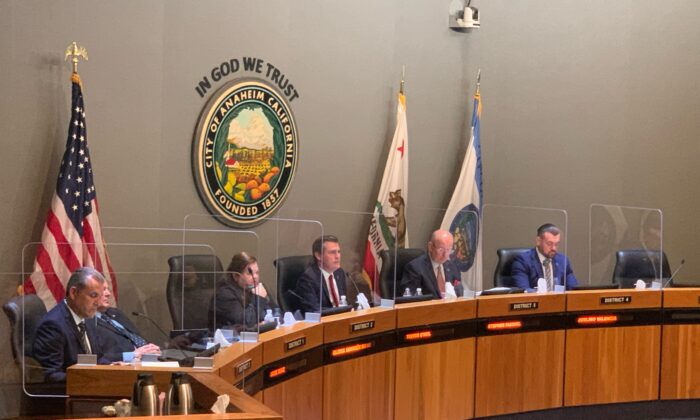 The City of Anaheim will respond this week to a grand jury report that found the city’s handling of the $320 million Angel Stadium deal was rushed, lacked transparency, and betrayed constituents.

A 4–2 vote by the city council Aug. 23 gave staff the approval it needed to send a letter (pdf) to the Orange County Grand Jury addressing recommendations made in “The Big A Lack of Transparency,” a reference to the stadium’s nickname, report released in June.

In Anaheim’s response, City Manager James Vanderpool pushed back against several findings about transparency and the alleged violation of state land act regulations.

The multi-year negotiations to buy the stadium and surrounding land for $320 million were fraught with controversies and fell apart in May. The Anaheim City Council voided the sale after allegations of possible back-door dealings surfaced in an FBI affidavit.

According to the affidavit, former Anaheim Mayor Harry Sidhu was accused of giving insider information to the baseball team in an effort to earn a substantial campaign donation. Sidhu resigned as mayor in April and has not been charged with a crime.

And this week, Angels baseball team owner Arte Moreno announced he was exploring a sale of the team.

In its response to the grand jury report, Anaheim disagreed that it violated the “spirit” of California’s Brown Act, an open meeting law that addresses, among other actions, how city councils can discuss real estate negotiations and payments.

“The City met all Brown Act requirements for the regularly scheduled 2013 meeting,” the city manager wrote. The city also said that the actions of an entirely different city council and staff made nearly a decade ago had no bearing on the recent sale agreement with the Angels.

Anaheim also disagreed with the grand jury’s finding that appointing Sidhu to the team negotiating the stadium deal was unusual. The Brown Act allows them to appoint elected officials to real estate negotiations, according to the letter.

Vanderpool said he also found it “unusual” for the grand jury to suggest the city should appoint more than one council representative to any negotiating committee. Adding more elected officials would further politicize the matter.

The city agreed, however, that more briefings with the city council would have provided more awareness to the public about some of the details and progress of the stadium sale negotiations.

A two-week notice was issued about a special city council meeting to consider an agreement for the stadium sale and made the draft agreement available for public review, Vanderpool wrote.

The city disagreed with a report finding that said it failed to proactively promote public participation by not conducting community workshops or other opportunities to engage the community. The city held two informational meetings about the sale, according to Vanderpool’s letter.

Anaheim also disagreed with allegations about violating the state’s Surplus Land Act that requires the land to first be offered to affordable housing developers. The state’s Department of Housing and Community Development issued a notice of violation to city attorneys in December 2021 but reached a settlement with the city this year.

“The truth is that [Housing and Community Development] and the City had a dispute as to whether the [Surplus Land Act] was violated or not. And rather than fight that battle in court, HCD and the City were able to reach a compromised settlement,” Vanderpool wrote.

Anaheim will require that affordable housing remain a part of any future redevelopment of the stadium property and a 15 percent set-aside of affordable housing units for very low-, low- and moderate-income households, according to the response.

The city will also make any future transactions regarding the stadium public for at least 30 days before the city council takes action.

City councilmen Jose Moreno and Avelino Valencia declined to support the response. Moreno said he did not agree with the wording in the response and Valencia said he had reservations because he was not on the council when the events occurred.

“I respect the role of the Orange County Grand Jury, but I also respect the time city staff put into the response,” Diaz said. “This is not a political statement. This is just a response to the grand jury.”