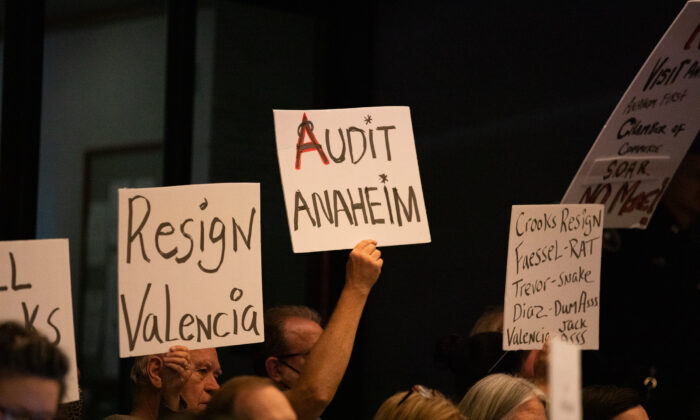 “Due to the actions outlined in the FBI investigation affidavit, this deal, in my opinion, just can’t move forward,” Councilman Avelino Valencia said.

City Attorney Robert Fabela said the city should expect the team to file a lawsuit seeking damages for at least $5 million or possibly more following the action. Angels representatives issued a letter last week to the city setting a deadline for the deal’s approval.

Mayor Harry Sidhu resigned on the day of the council meeting, amid allegations of corruption, leaving six councilors to discuss the future of the stadium deal.

City Council chambers were filled to capacity with about 100 people attending the meeting.

Audience members cheered about the mayor’s resignation at the meeting, with most hailing Councilman Jose Moreno for his persistence in opposing the stadium deal, saying the recent FBI probe unveiled a “pandemic of corruption” in Anaheim.

“This is a painful and challenging moment for Anaheim,” Mayor Pro Tem Trevor O’Neil said during the meeting. “The continued public outrage is not only understandable for part of the recovery process for our residents.”

During public comment, speakers at the meeting asked the council not to approve the stadium deal.

A member of The People’s Homeless Task Force Orange County—a homeless housing advocacy group that lost a lawsuit against the city last year claiming the city violated open meeting laws during the stadium sale negotiations—told the council she wasn’t done going after councilors.

Ashleigh Aitken, who nearly defeated Sidhu in her run for mayor in 2018, is running for the seat again this year. She told councilors the city needed to pursue campaign finance reform, including banning councilors from voting on issues brought forward by their campaign supporters.

“We need to think about anti-kickback reform, which bars city council members from accepting gifts, employment, or campaign donations from donors where a member has bestowed a beneficial public benefit,” Aitken said.

Moreno, the councilman, announced his intention to put the issue on a future agenda, and city councilors agreed.

A letter was read to the council on behalf of Sen. Tom Umberg (D-Santa Ana), Assemblyman Tom Daly (D-Santa Ana), and Rep. Lou Correa (D-Calif.), calling for an immediate investigation into current and past city councilors identified in the federal investigation and said the sale of the stadium must be canceled.

“I can say with relative certainty, I am elected official 3 in one of the phone conversations,” O’Neil said.

Councilman Stephen Faessel, who O’Neil said was “Elected Official 4” in the investigation, said the deal should be reconsidered in the future.

“If we want to continue to try to sell this thing, maybe it’s better done in the distant future,” Faessel said.

Prior to the meeting, the stadium sale was put on hold for 60 days starting May 17 by the Orange County Superior Court at the request of the state’s Attorney General’s Office and Department of Housing and Community Development.

Sidhu resigned after allegedly leaking secret information to the baseball team’s owner during negotiations of the stadium sale in hopes of later receiving a political campaign contribution, according to an FBI affidavit. Sidhu has not been charged or indicted.

The city said the selection of a new mayor may be up to voters in November.

O’Neil, the mayor pro tem, was mentioned in a lengthy FBI affidavit filed May 16. The court filing detailed a seedy scheme involving cannabis business consultant and political consultant Melahat Rafiei, who was then a representative of the Democratic National Committee and secretary of the California Democratic Party.

According to the filing, O’Neil and Faessel were considered as possibly being “loyal to the team,” by former Anaheim Chamber of Commerce CEO Todd Ament, who was arrested last week on charges of illegal financial dealings.

The affidavit, written by FBI Agent Brian C. Adkins, describes an alleged scheme hatched by Rafiei and Ament and an unnamed political consultant who is widely believed to be Jeff Flint.

Adkins detailed a conversation between the political consultant and Ament which describes the insiders as a “cabal.” The two allegedly debated whether to include O’Neil and Faessel, along with other elected officials who remain unnamed, should be included in their cabal.

Flint has not been charged or named in the investigation.

Rafiei resigned from her posts last week after publicly admitting she was a cooperating witness in the investigation, following an arrest in 2019 for “theft or bribery” involving federal funds related to the cannabis industry.

Rafiei cooperated with the investigation for three years, at one point wearing a wire to record conversations. Charges against Rafiei were dismissed without prejudice, meaning they can be resurrected at any time. She has denied the allegations.

The Angels baseball team is still operating under a lease agreement that ends in 2038.