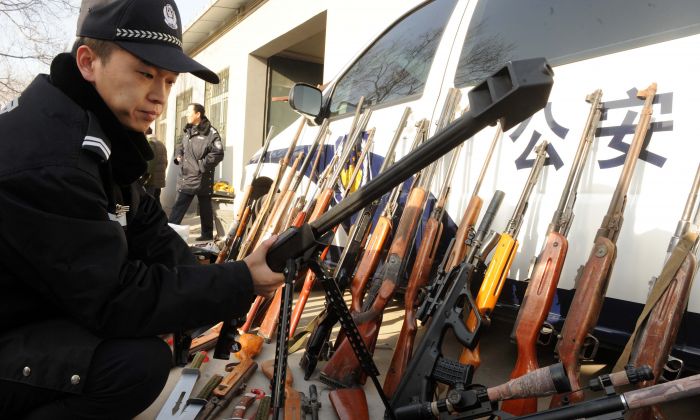 Chinese police prepare to destroy some 900 firearms and ammunition seized over the last nine months in Beijing on December 16, 2010. (STR/AFP/Getty Images)
Chinese Regime

The Chinese regime has announced it will begin a nationwide 100-day campaign to crack down on illegal weapons, as it tightens social control in the leadup to the 70th anniversary of the Communist Party’s rule in the country.

The campaign, which is to run from late April to the end of July, will target firearms and explosives, including underground markets and online selling channels.

The crackdown was initiated “to create a safe and stable social environment for the 70th anniversary of [the communist] China,” Sun Lijun, China’s deputy minister for public security, said at a ministerial meeting on April 10.

Sun also told the country’s police force to enforce the law against illegal manufacturers of guns and explosives.

The Chinese Communist Party will celebrate its 70 years of rule on Oct. 1. This year is also the 30th anniversary of the authorities’ crackdown on student protesters during the Tiananmen Square massacre, and the 20th anniversary of the regime’s persecution of the spiritual group Falun Gong.

Tightening controls on guns and explosives is the Chinese regime’s latest attempt to prevent any protests against its rule.

The Chinese communist regime has strict gun laws, prohibiting the ownership of firearms for private use, except for certain authorized purposes, including licensed hunting and research. Individuals and companies are barred from buying or selling firearms, and may be jailed for up to seven years if found guilty, according to China’s criminal law.

Most illegal firearms are sold on the black market and smuggled from foreign countries.

But corrupt officials can easily get their hands on firearms.

In several cases of corrupt officials who were later sacked, the Party’s announcement of their crimes included mentions of them owning illegal guns, including Cai Zongze, former mayor of Shantou City of Guangdong Province; Yu Mayue, former director of a regional Party committee in charge of the rubber-stamp legislature in Yunnan Province; and Chen Wenku, former minister of the United Front Work Department in Wuhai City of Inner Mongolia. The United Front oversees operations on foreign soil that further the Party’s agenda.

Chinese authorities have recently stepped up surveillance of dissidents. In early April, during the traditional Chinese holiday for visiting ancestral tombs and paying respects to the dead, Chinese authorities kept watch over Chinese activists to prevent them from visiting the tombs of those who died during the Tiananmen Square massacre.

April 15 was also the death anniversary of reform-minded Party leader Hu Yaobang. Hu’s death in 1989 propelled many students to take to the streets calling for democracy in China. While his death anniversary wasn’t officially commemorated, more than 300 Chinese citizens gathered for a memorial service in Jiangxi Province on April 15, according to a South China Morning Post report.