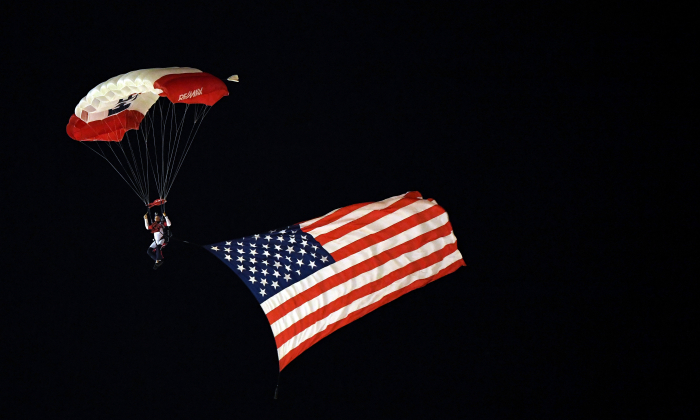 A skydiver flies with the American flag prior to the NASCAR Camping World Truck Series JAG Metals 350 at Texas Motor Speedway on Nov. 2, 2018 in Fort Worth, Texas. (Josh Hedges/Getty Images)
US News

Americans are more optimistic about their finances than they have been in 16 years, with 69 percent expecting their financial situation to improve in the next year, according to a survey released by Gallup on Feb. 11.

The optimism level is just two points off a peak reached in 1998, when 71 percent were optimistic about their finances in the year ahead.

During the Great Recession in 2007, only 23 percent of Americans said their financial situation improved compared to the year before.

After President Donald Trump took office in 2017, unemployment numbers dipped below 1998 levels, prompting a surge of confidence among Americans about their financial well-being. During the recession in 2007, 54 percent said they were worse off. That number has now fallen by more than half to 26 percent, according to Gallup.

“Only once in 114 polls going back to 1977 have Americans been more optimistic about their personal finances in the coming year than they are today,” Gallup stated in an article accompanying the survey results.

For decades, Americans have been more optimistic about the year ahead than the one that just passed. Gallup has tracked this trend in every one of 105 polls conducted since 1977.

Partisanship appears to have a significant impact on the perception people have on how well they are doing.

Republicans have an entirely opposite view to Democrats, with 68 percent saying they are better off and just 10 percent saying they were worse off. Among groups that are more likely to vote for Republicans, optimism is also high. Sixty-six percent for conservatives, 57 percent of those with a household income of over $100,000, and 56 percent of men said they are better off this year compared to last.

Both Republicans and Democrats changed the perception of their financial well-being around the time Trump replaced President Barack Obama.

In an inverse trend, Democrats were much more optimistic about their finances before Trump was elected. Fifty-eight percent said they were better off in the 2015-2016 polls conducted before Trump’s election. That number dropped to 35 percent in the 2018-2019 polls.

“The United States brought in the new year with a partial government shutdown that stretched through most of January and a growing sense of pessimism about the nation’s economy,” Gallup stated.

“But in spite of the negative turn in the public’s views about the national economic picture, Americans are more upbeat now about their own finances than they have been in years,” it said.

The U.S. economy started the new year with a bang, adding 300,000 jobs in January, beating forecasts from economists by around 130,000 jobs. The unemployment rate ticked up slightly but remained healthy at 4 percent, a level considered as full employment.

Economists cooled their views of the jobs market by assuming that the partial government shutdown, which started in late 2017, would affect the employment numbers. But the Bureau of Labor Statistics did not count federal employees who were furloughed during the shutdown toward the jobs report total.

The healthy economy is likely contributing toward Americans’ view of Trump. On the morning of the Gallup survey release, Rasmussen Reports, the pollster that most accurately predicted the likelihood of a Trump victory in 2016, pegged the president’s approval rating at 52 percent, the highest since March 2017.