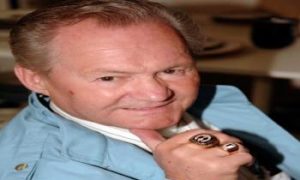 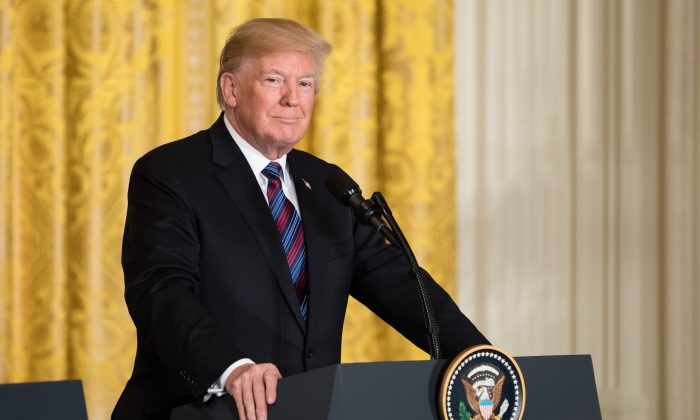 President Donald Trump at a Joint Press Conference with the Baltic States Heads of Government in the East Room of the White House in Washington on April 3, 2018. (Samira Bouaou/The Epoch Times)
Viewpoints

American Renewal: Secretariat and the Speed of Trump

Super Bowl week. You might think it would be the week to celebrate the incredible run of Bill Belichick, Tom Brady, and the Patriots. After all, they just joined the Steelers in having an NFL-leading sixth Super Bowl championship. It’s hard to overlook that.

Well, maybe the kneelers did. Or the executives of the NFL, the ones who were stupid enough to think the kneeling was okay. Or maybe the half-time show. Or the $10 million ad for and by The Washington Post claiming they check facts so well, and that America won’t die in darkness (oh, the humor!). Or maybe the game was boring. Whatever. I’m leaving the Super Bowl for the past.

Having recently watched the movie “Secretariat” for the second time, I’m going to have some fun with sports analogies.

“Secretariat,” like with most “historical” movies, took some liberties, but overall, it represented what happened quite well. Secretariat was a champion of champions, a racehorse with an incredible combination of speed and endurance. He had the strength and talent to be one of the world’s few winners of the prestigious, and elusive, Triple Crown of horse racing.

In 1973, he won the Kentucky Derby, The Preakness, and the Belmont Stakes, and holds the course record in each of those races—records held now for close to 50 years. He’s considered one of the greatest athletes in any sport; his record speaks for itself. He was the penultimate winner. Apologies to Brady, who is considered by many the greatest in his sport, but holding records for all your major events for that long? Only Secretariat did that.

Now, there’s a contact sport that’s not so sporting in the United States. It’s called politics, and as they say, it ain’t beanbag. Yes, I’m mixing in all these sporting phrases, because normally we don’t have Super Bowl Sunday and the State of the Union speech happen just days apart. Besides, a little fun is important.

The Speed of Trump

There is a phrase, “The speed of Trump.” Hint: It’s not about being a fast runner. But it’s a phrase used to describe Trump’s White House. It’s heard as a positive phrase by those who actually work in the White House for his agenda, by those who like his agenda, or by those who observe Trump’s actual accomplishments. And of course, it’s sometimes used negatively by our wonderful, unbiased, left-leaning, “fact-checking” media.

One thing’s for certain, we have never heard of working hours like those kept by Trump for any other president. Don’t buy their reports of unstructured “executive time” as if he is Chauncey Gardiner. The truth: He sometimes sleeps as much as four hours per night, which must chill the blood of his opponents, because, for him, that’s normal.

With 20/20 hindsight, we’ve never seen a president with so many diverse talents and accomplishments, nor his stamina. A few presidents had some prior business experience, but none with the business acumen of Trump, or his success. The electorate had been trained to think of “experience” as meaning time spent in government, perhaps as a senator or governor of a state.

When you think back on it, it should have been clear to the media, and to his opponents, that they were running against a thoroughbred, not a joke as many claimed he was. I expected him to win, and was not surprised at all. When he did win, I pulled out the fictitious early-morning speech of Secretariat’s groom from the movie. “Hey, Kentucky! Big old Red done ate his breakfast this morning! And you about to see something that you ain’t never even seen before!”

Hey America! The big-haired man from Queens is ready to make America great again! And you’re about to see something you ain’t never seen before! The speed of Trump.

It’s now been more than two years and they still don’t get it. His accomplishments during those first two years have been chronicled by a lot of people. They are legion. Astonishing. In my opinion, his first two years saw him surpass the 16 years of the two prior presidents. It’s simply a fact to be reckoned with, which ought to scare the living daylights out of his opponents. But they’re too busy looking in the mirror to realize what’s about to happen.

Before, during, and since the government shutdown, Trump has positioned himself well. His opponents have been busy preening about how well-groomed they are, or how much faster than Trump they are.

In the State of the Union speech, I’m predicting the unexpected, meaning Trump will not only nail it, but he’s also going to push the America-first agenda with vigor. He’s going to highlight the American dream and American exceptionalism. He will blow by his opposition like they’re standing in the gate, or just trotting around the track.

The speed of Trump. He’s about to hit another gear, with the State of the Union speech likely marking the beginning. He’s going to get the wall built—it’s already being built. He’s going to tackle the illegal immigration crisis, while his opponents pretend there is no crisis, and he doesn’t have the American public on his side.

He’ll continue to fight the Chinese, and win, while his opponents point to the idiotic, foolish, nothing-burger ridiculous Russian narrative. His economic miracle will continue and jobs will be at an all-time high—for Hispanics, African-Americans, and women—for everyone. While his opponents mock what’s happening, America knows. It’s great again.

While the Democratic media complex is flexing its muscles in the mirror, Trump is going to run the race before him. He’s going to leave them behind. He’s about to show them some speed, and as per usual, show them something they ain’t never seen before.

And as mentioned, he is positioned well. On issues, he’s winning the support of America, while the left descends into a murky abyss of their own making. They seem obsessed with simply going further to the left, with each Democrat who declares they are running for president.

The show will go on. The State of the Union speech will be great. It will be broadcast far and received well by America. But it won’t go well for those opposing American renewal or American exceptionalism, much like how it went for the opponents of Secretariat at the Belmont, where he took the lead early—and kept going harder. What looked like a great race between Secretariat and Sham at the halfway point turned into a rout.

From the actual footage of the race: “Secretariat is all alone.”

He won by 31 lengths, leaving the announcer and the world in disbelief. So, as we leave behind the celebration by Belichick, Brady, and the Patriots’ organization and fans, the country will pivot to what’s important.