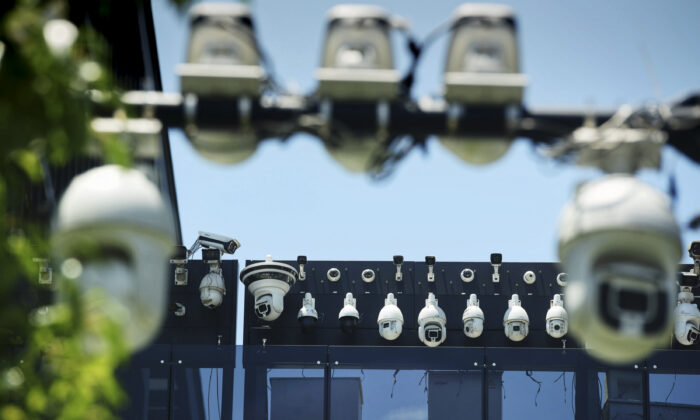 Surveillance cameras in Hangzhou, in east China's Zhejiang province on May 29, 2019. (STR/AFP via Getty Images)
By Eva Fu

U.S. companies should know what values they stand for and stop supplying technologies to an authoritarian Chinese regime that is increasingly using surveillance to suppress religions, Gary Bauer, commissioner at the U.S. Commission on International Religious Freedom, told The Epoch Times.

“Tech companies need to remember that they are American tech companies. And they should be sensitive to the values that we stand for,” he said in an interview. “When we see some of these companies willing to cooperate with a communist authority, it’s not acceptable.”

A popular underground church in Beijing was shut down for refusing to install security cameras inside. In Tibet, people have been arrested for sharing photos of the Tibetan Buddhist spiritual leader Dalai Lama on social media. Most recently, the regime has imposed a national security law on Hong Kong, which empowers officials to censor online content and intercept communications, prompting fears among local faith groups of mainland-style persecution.

“No authoritarian state has leveraged digital technologies more successfully than modern China,” said Chris Meserole of Washington-based think tank Brookings Institution during the hearing. “For religious groups targeted by the CCP [Chinese Communist Party], the result has been as devastating as it is tragic.”

Some U.S. companies have played a part in fueling the regime’s surveillance industry or complying with its censorship.

Apple, for instance, has removed or rejected thousands of apps from the Chinese version of its App Store at the behest of the Chinese regime, despite the company’s recent call for a “more just world for everyone,” noted Lobsang Sither, a Tibetan-in-exile who heads the digital security program at the Tibet Action Institute, a human rights advocacy group.

Tech giants such as Intel and Nvidia have sold artificial-intelligence chips to surveillance equipment maker Hikvision, one of nearly 50 Chinese companies on a U.S. sanctions list for their involvement in human rights violations in China’s far-western region of Xinjiang, according to a November 2019 report by the Congressional-Executive Commission on China. Chinese authorities have detained an estimated 1 million Uyghurs and other Muslim minorities inside concentration camps, under the banner of combating “religious extremism.”

The California State Teachers’ Retirement System, the second-largest pension fund in the United States, owned about $24.4 million worth of shares in Hikvision as of June 30, 2018.

In a July 16 speech highlighting communist regime’s threat to U.S. freedoms, Attorney General William Barr had similarly called out corporate America for “kowtowing” to Beijing, saying Hollywood and U.S. tech firms have been too eager to access the Chinese market and thus “allowed themselves to become pawns of Chinese influence.”

“For the sake of short-term profits, American companies have succumbed to [Chinese] influence, even at the expense of freedom and openness in the United States,” he said.

For multinational companies that are already facing scrutiny, it’s time to step back and reassess their stakes in China, said Bauer.

“If they’re concerned about their brand, they need to understand that if it becomes obvious that they’re cooperating with the Chinese communists to oppress, discriminate against people, that that is going to hurt their brand and their profits a lot more than if they irritate the Chinese Communist government,” he said.

The proliferation of China’s intrusive surveillance technology—already used in over 80 countries worldwide—has become difficult to ignore during the current virus pandemic, as Beijing began actively exporting its “health surveillance” software in the name of tracing virus patients, said Sheena Greitens, an associate professor in public affairs at the University of Texas at Austin.

Global regulations on the use and export of Chinese-manufactured surveillance tools are sparse, if any, with Chinese companies largely writing the rules, said Greitens. Left unchecked, such developments could further bolster global reliance on Chinese technology and normalize mass high-tech monitoring, especially in countries where civil liberties are already at risk, she added.

On July 21, the U.S. Senate Foreign Relations Committee issued a report decrying Beijing’s concerted campaign to export its “digital authoritarianism,” which, according to UC Berkeley researcher Xiao Qiang, has “created systemic competition with the United States and other democracies.”

“At its core, this competition is over the value of basic human freedom and dignity,” said Xiao during an online forum unveiling the report.