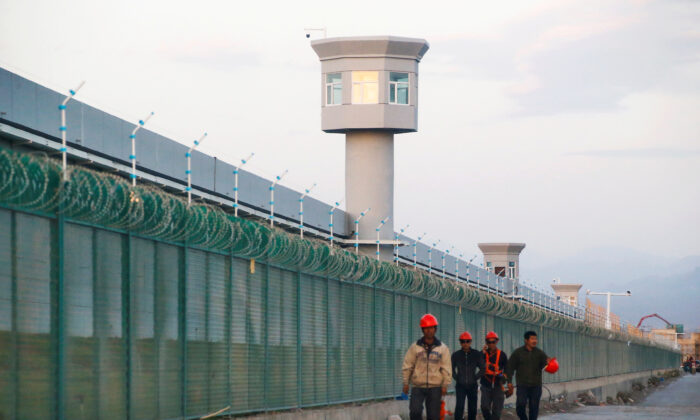 Workers walk by the perimeter fence of a labor camp in Xinjiang on Sept. 4, 2018. (Thomas Peter/Reuters)
By Emel Akan

WASHINGTON—The U.S. Commerce Department on July 20 added 11 Chinese companies to its economic blacklist, citing their involvement in human rights violations and abuses in the western region of Xinjiang.

The firms were implicated in helping the Chinese communist regime in its “campaign of repression, mass arbitrary detention, forced labor, involuntary collection of biometric data, and genetic analyses targeted at Muslim minority groups,” the department stated.

These companies will be added to the U.S. entity list, which bans their access to American goods, including commodities and technology, unless they get approval from the U.S. government.

“Beijing actively promotes the reprehensible practice of forced labor and abusive DNA collection and analysis schemes to repress its citizens,” Secretary of Commerce Wilbur Ross said in a statement.

“This action will ensure that our goods and technologies are not used in the Chinese Communist Party’s despicable offensive against defenseless Muslim minority populations.”

This was the third group of Chinese companies added to the blacklist since October 2019. The Trump administration earlier added a total of 37 companies and institutions to the list for enabling the communist regime’s repression in Xinjiang. Among the companies previously blacklisted were Hikvision and Dahua Technology, two of the world’s largest manufacturers of video surveillance products.

The new list includes nine companies that are involved in using Uyghurs and other Muslim minority groups as forced labor.

Among them is Nanchang O-Film Tech, supplier of nearly two dozen tech and automotive companies, including Amazon, Apple, Dell, General Motors, and Microsoft.

Four companies included in the entity list in connection with the practice of forced labor—Nanchang O-Film, Hefei Meiling Co., KTK Group, and Tanyuan—are listed on the Chinese stock exchange.

In addition, two companies —Xinjiang Silk Road BGI and Beijing Liuhe BGI—were added to the entity list for their role in “conducting genetic analyses used to further the repression of Uyghurs and other Muslim minorities.”

U.S. lawmakers have been raising concerns about factories that use forced labor in China.

The latest proposal came from Sen. Josh Hawley (R-Mo.) who has called for holding U.S. companies accountable for slave labor in their supply chains.

He announced on July 20 that he would introduce the Slave-Free Business Certification Act, which would increase corporate disclosure requirements, mandate regular audits, and require corporate executives to certify that their companies’ supply chains don’t rely on forced slave labor.

At least 83 famous global brands have been tied to forced labor in China, in the technology, clothing, and automotive industries, including Apple, BMW, Gap, Nike, and Samsung, according to a report by the Australian Strategic Policy Institute.

The report released in March estimated that more than 80,000 Uyghurs were sent to factories across China between 2017 and 2019.