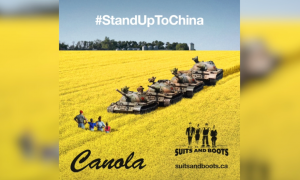 Campaign Urges Canadians to ‘Stand Up to China’
0 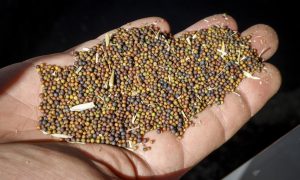 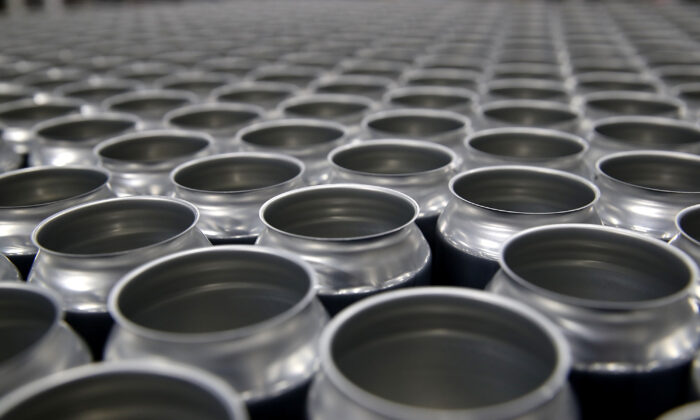 Stacks of empty aluminum cans sit on a pallet before being filled with beer at Devil's Canyon Brewery in San Carlos, California in a file photo. New tariffs imposed by the United States on aluminum from Canada could cause the price of canned beer and soft drinks to rise. Canada is taking decisive action to counter the 10 percent tariff. (Justin Sullivan/Getty Images)
Companies

Canada’s swift retaliation against U.S. tariffs on aluminum imports shows it is willing to stand up to a much bigger country.

However, Ottawa’s reaction toward its most important ally raises the question as to why it doesn’t do at least the same, if not more, against Beijing—clearly a hostile regime that has done far worse than slapping tariffs on aluminum.

“Our representatives are literally terrified of doing anything that might displease China,” Crowley, the managing director of the Macdonald-Laurier Institute, told The Epoch Times.

Deputy Prime Minister Chrystia Freeland called it “unwarranted and unacceptable” to levy the tariffs over national security concerns. Canada and its aluminum producers have denied allegations that they flooded the U.S. market with aluminum.

The feds will hit back with $3.6 billion in tariffs to match dollar-for-dollar the impact of the U.S. tariffs, which start on Aug. 16. Freeland said the goal is to have the strongest possible impact on the United States with the retaliatory tariffs.

But Crowley says Canadians would do well to reflect on why their government feels it can go head-to-head with its largest trading partner, with whom it has far more at stake than it does with China.

He says Ottawa thinks it’s safe to push back against the United States since it knows there are limits on what will be returned, but it’s a different story with China. “We have no confidence that China will not go well beyond what was justified, [knowing] that they are completely unrestrained by the law, by tradition, by the standards of the international community.”

Beijing has arbitrarily detained Canadians Michael Kovrig and Michael Spavor for two years now and has sentenced four Canadians to death, in moves widely viewed as retaliation for the arrest of Huawei executive Meng Wanzhou in December 2018. In addition, the communist regime has blocked canola shipments by two Canadian exporters since March 2019, and other exports such as pork and soybeans also faced restrictions.

That doesn’t include Beijing’s antagonistic moves like coercion and influence operations in Canada. These operations aim to silence criticism of the regime and have Canadian politicians and business leaders adopt more favorable stances toward its ambitions, such as installing Huawei 5G equipment in national telecommunications networks.

Crowley says Canada needs to keep its relationships with the United States and China in proper perspective. What Canada sells to China is a small fraction of what it sells south of the border.

Canada is part of an integrated North American economy that’s largely driven by the United States. Thus, adeptly managing the relationship with Washington is the single most important job for Ottawa, Crowley says.

“Ottawa has to be, in effect, the voice that speaks for us as if we were represented in Congress to protect our economic interest,” he said.

David Mulroney, a former Canadian ambassador to China, wrote on Twitter that Prime Minister Justin Trudeau and Freeland “show as much contempt for POTUS [U.S. President Donald Trump] as they can get away with.”

Trudeau and Freeland are counting on U.S. voters to “solve their ‘foreign policy’ problem in D.C.,” he wrote.

Mulroney contrasted this tack with the one adopted toward China, where he said there is no similar solution available to deal with Beijing.

“But with China, a real menace, it’s flattery, silence or the weakest criticism they can get away with,” he wrote.

“The reality is that Canada has what China needs,” Mulroney told the parliamentary Special Committee Canada-China Relations on Aug. 6. China’s environmental destruction has damaged a lot of its productive capacity and Beijing is hungry for agricultural products and natural resources—Canada’s forte.

“Old approaches die hard. It’s not clear that the government has completely given up the fiction that China is our friend,” Mulroney said in his opening remarks to parliamentarians. “Nor has it consistently summoned the courage to speak and act with integrity. Powerfully placed Canadians continue to argue that if we appease China just one more time, all will be well.”

It wasn’t until months after the announcement of the canola trade restrictions that Canada requested World Trade Organization (WTO) dispute consultations with China.

Other more punitive measures haven’t been undertaken. One is cutting funding to the Beijing-led Asian Infrastructure Investment Bank, to which Ottawa committed $256 million over five years. Another is using Magnitsky Act sanctions against rights-abusing Chinese officials. Canada has already imposed these sanctions against officials of Russia, Venezuela, Saudi Arabia, and South Sudan, for example.

An even tougher stance against the Beijing regime would be to “decouple,” suggests Brian Giesbrecht, senior fellow for the Frontier Centre for Public Policy.

“Bidding farewell to cheap Chinese goods is a small price to pay to preserve our freedoms,” he wrote in an op-ed for The Epoch Times.

Without doubt, the timing of the 10 percent U.S. tariff on Canadian aluminum is bothersome. It was imposed shortly after the United States-Mexico-Canada Agreement—the updated North American Free Trade Agreement—came into effect on July 1, 2020. About 76 percent of Canada’s primary aluminum production is exported to the United States.

“There will be a little bit of back-and-forth and some political point-scoring, and that’s the end of it,” Crowley said. “We don’t have anything like that kind of confidence in our relationship with China.”

In 2018, the United States hit Canadian steel imports with a 25 percent tariff and aluminum with a 10 percent tariff. Those tariffs were removed a year later.

Tariffs raise the cost for manufacturers, which in turn increases the cost for consumers. The widely used metals are found in cars, appliances, and cans.

Many economists and policy analysts have said that Canada is doing the right thing in hitting back at the United States. Ninety percent of Canadians who took part in a web survey objected to the White House’s tariff, and 70 percent said Ottawa should fight back by imposing its own tariffs on U.S. products.

However, dollar-for-dollar tariffs against an economy roughly 10 times Canada’s size “will be nothing more than an annoyance,” BMO strategist Benjamin Reitzes said in a note. U.S. aluminum exports to Canada are about a third as large as what Canada sends south of the border.

“Donald Trump has been very provocative … and I think we’ve often made the situation worse than better. I think Ottawa needs to reflect a little bit on that,” Crowley said.