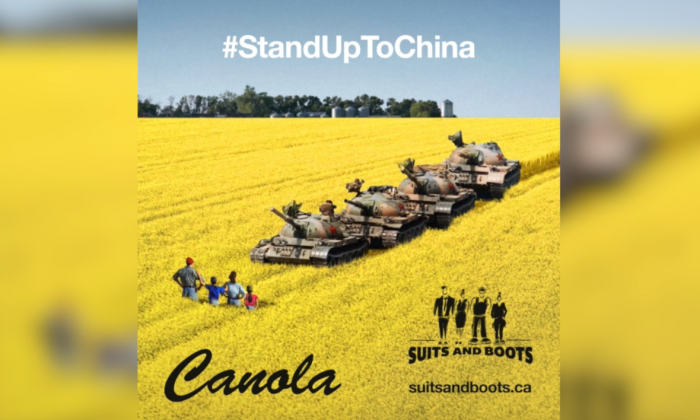 Campaign Urges Canadians to ‘Stand Up to China’

With China blocking Canadian imports of canola and other products as Beijing escalates its offensive against Canada, Canadians need to “stand up to China,” says Rick Peterson, founder and director of the pro-resource group Suits and Boots.

The group, which in the past has held pro-pipeline campaigns, has launched a new campaign, #StandUpToChina, in support of the canola and other industries that have been dealt a blow since China suspended imports of their products in the aftermath of Canada’s arrest of Huawei CFO Meng Wanzhou.

“It’s time to recognize that being polite and watching what’s going on quietly isn’t going to solve things,” says Peterson.

He says the group was founded by investment professionals like himself, who support “working families of the resource sector,” and doesn’t have any government or corporate funding. He describes it as a non-partisan grassroots movement with several thousand supporters across the country but mainly in the Prairies, based on the number of people who have supported its online and email campaigns.

Since Meng’s arrest in Vancouver last December on a U.S. extradition request, Canada has been on the receiving end of a slew of aggressive moves by Beijing against Canadian individuals and businesses.

Shortly after the arrest, the regime detained Canadians Michael Spavor and Michael Kovrig—finally formally arresting them last week and charging them with stealing state secrets—and sentenced two Canadians to death on drug-related charges. In addition, Canada’s exports of canola to China, worth over $2 billion annually, have been blocked, and exporters of other products including pork, peas, and soybeans are facing increasing obstacles getting their products into China.

Peterson says Canada’s response so far has been soft, but he noted that Prime Minister Justin Trudeau hardened his tone this week.

Speaking in Sept-Iles, Quebec, on May 21, Trudeau said “China is playing stronger, making stronger moves than it has before to try and get its own way on the world stage, and Western countries and democracies around the world are pulling together to point out that this is not something that we need to continue to allow.”

So far as part of their #StandUpToChina campaign, Suits and Boots is asking supporters to contact the Chinese ambassador and consuls in Canada and tell them that Beijing’s behaviour isn’t acceptable. The next phase in the campaign will involve contacting Canadian organizations that do business with China and asking them to stand up to China, “telling them that what is going on can’t continue and is wrong.”

The #StandUpToChina campaign poster shows a farmer family in a canola field standing in front of a convoy of Chinese tanks, an allusion to the Tank Man who stood in front of tanks in Beijing to block their path during the 1989 Tiananmen Square massacre.

“The Tank Man standing up to the tanks in Tiananmen Square was a symbol of courage in the face of a tremendous amount of power,” said Peterson, noting that June 4 marks the 30th anniversary of the massacre.

“Today, China is the largest, most powerful, most aggressive country that we’re dealing with. It takes courage to stand up to China and say that you have to stop this, and that’s what we are trying to get our followers to do and to stand up for people.”

A Canadian delegation consisting of MPs and senators is currently in China to seek the release of Kovrig and Spavor.  The two haven’t been allowed legal representation and have had very few consular visits by Canadian officials.

The delegation is led by Liberal MP Robert Oliphant, parliamentary secretary to Foreign Affairs Minister Chrystia Freeland. In an interview with CBC radio, Freeland said she hasn’t been able to talk to her Chinese counterpart despite repeated requests.

“It’s a terrible situation and we are very clear that these two men are arbitrarily detained,” she said.

Conservative MP Stephanie Kusie, a former diplomat, says current and former diplomats who were once her colleagues have told her that Canada needs a more effective response to the issue.

“I would really urge the Trudeau government to re-evaluate their global strategy for Canada and consider returning to a principle-based strategy rather than just being reactive,” Kusie said.

Requests for comment from Global Affairs were not returned by press time. Earlier this month, spokesperson Guillaume Bérubé said in an email that “Canada and China share a broad and important relationship, built on cooperation in the spheres of education, culture, tourism, business, and the environment. This relationship remains a priority for Canada.”

“We are very concerned by the arbitrary detentions of Canadians in China. These cases are a priority for our government,” he added.

Former Canadian diplomats and ambassadors to China have urged Ottawa to take a tougher stance against Beijing, with some commentators suggesting Canada should expel Chinese diplomatic staff or use the new Magnitsky Act to sanction individuals in China responsible for the arbitrary detention of Canadians.

Canada has urged its allies to add to the chorus of voices asking China to release Kovrig and Spavor. Earlier this month, the U.S. Senate passed a resolution in support of Canada and praising Ottawa for upholding the rule of law in arresting Meng. U.S. officials, including Secretary of State Mike Pompeo, have condemned the detention of the two men and have called on China to release them.