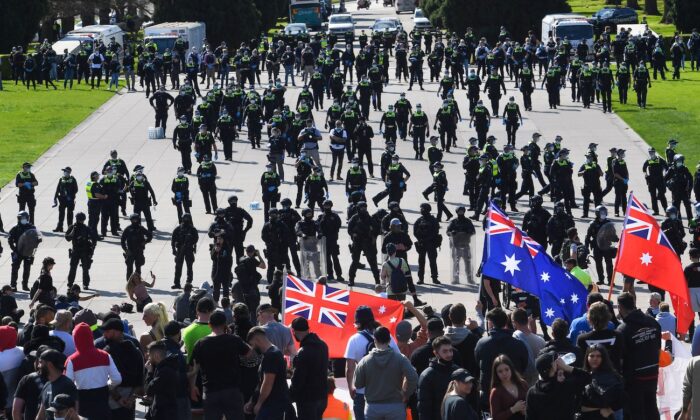 Police arrest construction workers and demonstrators with tear gas on the steps of the Shrine of Remembrance during a protest against Covid-19 regulations in Melbourne, Australia, on Sept. 22, 2021. (William West/AFP via Getty Images)
Australia

‘Allow People to Make Their Own Choice’: Former Australian PM on Melbourne Protests

Former Prime Minister Tony Abbott is urging authorities to let Australians make their own decision on whether to take the vaccine, amid ongoing protests in Melbourne involving thousands of Victorians against government-mandated COVID-19 restrictions.

“I don’t think anyone should break the law, but I can certainly understand people resenting what they see as bad laws and wanting to protest against them,” he told the  Institute of Public Affairs (IPA) “Australia’s Heartland with Tony Abbott” podcast.

Protests have continued for several days in Melbourne against COVID-19 restrictions.

The action began with an initial gathering of around 100 constructions workers on Sept. 20 outside the Victorian office of the Construction, Forestry, Maritime, Mining, and Energy Union (CFMEU)—one of the largest unions in the country—calling for Victorian State Secretary for Construction John Setka to stand down.

Workers accused Setka of not supporting calls to end vaccine mandates for the construction industry in the state, which take effect Sept. 24. The accusation was denied by Setka.

The protests turned ugly, however, when a segment of the crowd began vandalising the office.

Soon after the incident, the Victorian state government announced that construction across metropolitan Melbourne, as well as four other local government areas, would be shut down for two weeks, citing “continued concern about case numbers, transmission risk, and reduced compliance.”

The move was widely criticised and sparked subsequent demonstrations which escalated and saw thousands of Victorian’s march across the city on Sept. 21. The third day of protests on Sept. 22, saw marchers move through the Melbourne CBD before stationing themselves at the Shrine of Remembrance.

Abbott encouraged Australians to get vaccinated, noting that he did not want to give governments “any excuse not to give back our freedoms.”

“But if for whatever reason, people don’t want to get vaccinated—unless they’re in very specific occupations like working in nursing homes or working with the very vulnerable—you’ve just got to allow people to make their own choices,” he said.

State leaders have readily used tough measures to contain any outbreak of the virus, including locking down entire cities (sometimes over a single infection) and implementing public health restrictions on movement.

However, the outbreak of the Delta variant—which began in Sydney—has seen leaders in Victoria and New South Wales, move the official narrative away from containment to “living with the virus.”

This would be achieved, they argue by increasing vaccination rates across the population.

Frustrations though have boiled over in recent months with an increase in protest activity, petitions, and lawsuits against government-mandated regulations, vaccine mandates, and passports.