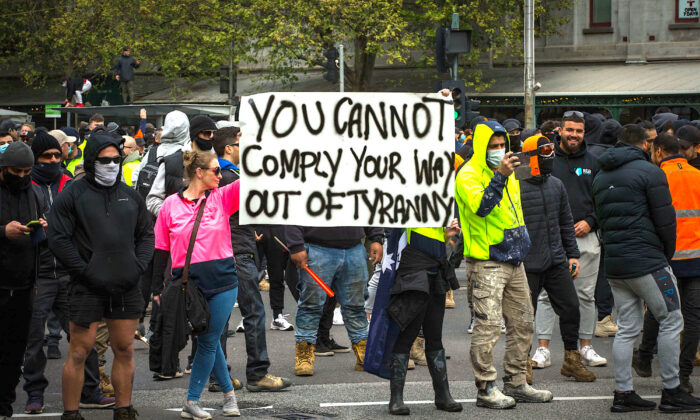 Protesters hold a sign that reads 'You cannot comply your way out of tyranny' during demonstrations against mandatory COVID-19 vaccines and restrictions in Melbourne, Australia, on Sept. 21, 2021. (Darrian Traynor/Getty Images)
Australia

Australian protesters dressed in hi-viz gear and work boots have taken to the streets of Melbourne for a second day of demonstrations to protest mandatory COVID-19 vaccinations for construction workers.

As they marched, the protesters chanted slogans such as, “every day,” “freedom,” “[expletive] the jab,” and “[expletive] Dan Andrews,” referring to the state’s leader, Victorian Premier Dan Andrews.

The crowd first gathered in the morning at the intersection of Elizabeth and Victoria streets in Melbourne’s CBD but were blocked from accessing the headquarters of construction union CFMMEU by a line of Victoria Police officers, who were lambasted by the protestors.

A line of police then followed the crowd from a distance as they moved through the city towards the state Parliament, where more police met them in riot gear, along with mounted police at approximately midday.

It is estimated that the crowd swelled to thousands in the time between when it first started in the morning and when they reached the Parliament building. A further up to 55 thousand watched live online via Real Rukshan on Facebook.

During the march towards the state Parliament, orange smoke was seen, and firecrackers were set off intermittently as the protesters walked through the streets.

The second day of protest comes as the Victorian state government announced that the entire construction industry would be shut down from Tuesday for two weeks in metropolitan Melbourne, City of Ballarat, City of Greater Geelong, Surf Coast Shire, and Mitchell Shire.

CFMEU boss John Setka blamed “professional protesters” for the violent scenes outside the Victorian CFMEU offices the day before, where water bottles were thrown, and the office’s windows were smashed.

“There was a small minority of construction workers, some of them when it all got violent just walked away from it. It was hijacked by the professional protesters,” Setka told ABC Radio on Sept. 21.

Australian federal MP Bill Shorten also alleged that some of the protesters on Sept. 20 were “fake tradies” and labelled some of them “man-baby Nazis.”

“They’ve been down to the Reject Shop and got themselves a $2 hi-viz hoodie,” he told Nine’s Today show on Sept. 21.

The protesters moved away from the state Parliament building and made their way along Swanston Street to the Flinders Street intersection.

Here, at approximately 1.45 p.m., they were again met by mounted police while a line of officers stood guarding the entrance to the iconic Flinders St Station, according to footage live streamed by Real Rukshan.

A few in the crowd threw water bottles at the police before organisers redirected the crowd of thousands down Flinders Street towards the Docklands—many cheered for Rukshan in support of his work as an independent journalist as they streamed past.

At about 2 p.m., the protesters moved through South Melbourne and entered the freeway, blocking traffic.

The protesters then continued to march, never staying in one location for too long.

Victorian Greens leader, MP Samantha Ratnam said she was disturbed by the protest scenes across the city.

“We have seen the far-right rise over the last few years and it is now escalating to the next level,” she wrote on Twitter.

“People should have the right to protest but it should be peaceful. These people seem hellbent on causing chaos and are putting all of us at risk with their misinformation and defiance.”

Video shared on Twitter showed a can of V energy drink was thrown at a Seven News reporter, striking his head during a live cross.

Protesters marched westbound across the West Gate Bridge, an eight-lane bridge that peaks at 58 metres (190 ft) above water level, and twice the size of the Sydney Harbour Bridge at about 2.5km (1.5 miles). Then returned towards the city where they were met by riot police near the city end of the bridge at approximately 3.45 p.m.

Protesters jumped the barricade and dispersed into oncoming traffic that had ground to a halt to avoid the police, who began to fire tear gas and other projectiles at the crowd, according to Real Rukshan’s livestream.

Most of the protesters got by police and continued to move back towards the city as of 4 p.m. local time.

Meanwhile, in another part of the city, video showed police cars rushing to back away from protesters who began to throw objects and attempt to break the vehicles windows and side mirrors.